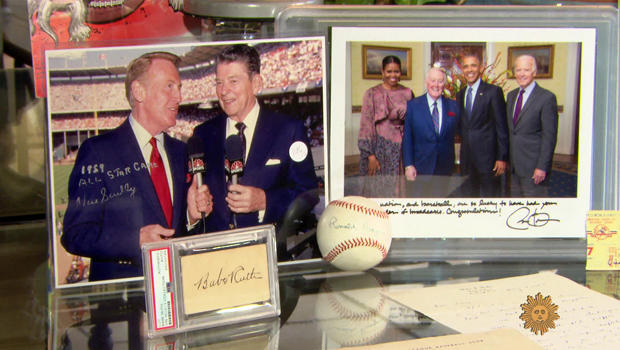 The last time "Sunday Morning" met up with Hall of Fame broadcaster Vin Scully, it was a warm summer night at Dodger Stadium in Los Angeles. It was eight years ago, but the privilege of going to a ballpark in person feels like a century ago.

Baseball in 2020 is the season of cardboard cuts-outs in the stands and piped-in fan noise.

"I've spent my life in sports, and it's just about shut it down," Scully told correspondent Lee Cowan.

He wasn't just the voice of the Dodgers. Scully was in his heart baseball's storyteller. After 67 seasons, the redhead who started with the Brooklyn Dodgers at 23 retired in 2016 just shy of his 89th birthday.

"In my heart, in my mind, it was enough. And I've never had one misgiving about the fact, 'You know, I should have waited one more year,'" he said.

"Is it strange watching as a fan?"

"I don't watch it critically," Scully replied. "I'm not listening really to what the announcers say, 'Are they trying to steal my stuff?' You know, I have none of that!"

Nobody could "steal" Scully's stuff, but they can now collect some of it.

Over the years he's accumulated some of the game's crown jewels – World Series trophies, World Series rings, Presidential autographs, and more awards than places to put them.

"The awards are gratefully received, but they're only for the moment," he said.

So, he's decided to sell some of those monumental moments through Hunt Auctions in Philadelphia. He wants the proceeds, which could be pretty substantial, to go to his five kids, 16 grandkids, and to charity.

Cowan asked, "Was there anything hard to give up?"

"You know, I must be very cold-hearted, because there isn't one thing that I really felt, I hated to give up. Not one."

Not even a scrap of paper Scully got as a boy hanging around the upper right field deck at the Polo Grounds in New York: "And lo and behold, there was Babe Ruth. And he reached into his pocket, and he took out looked like 50, 100 business cards, and on each card was his signature, Babe Ruth."

"So, you were handed that card by Babe Ruth himself?"

"Yeah, isn't that amazing?" Scully said. "It somehow showed up when we started digging."

"Did you forget you had it?"

"No, I didn't forget, but I wasn't quite sure where it was!"

Some items he's had most of his career, like his battered leather binder, which he took to every game. "Oh, I didn't live without this." Still taped inside are now-yellowed notes to himself, like a Shel Silverstein poem he'd read whenever he saw a toddler in the stands:

"Oh, the thumbsucker's thumb may look wrinkled and wet
and withered and white as snow,
but the taste of the thumb is the sweetest taste yet
as only we thumbsuckers know."

Surely that he'll keep, Cowan thought. But no. "I've worn it every day, almost every hour of every day, but it'll go," Scully said.

Vin Scully is as much a part of baseball history as the players and the plays.

And he's not out of the game. In fact, he's just joined Twitter:

… to continue talking about great moments in baseball. He's seen enough of them to know that baseball keeps going.

Time, however, stops for no one. "I mean, I'm 92," he said. "Even if I live to be a hundred, that's only a couple of years from now. Where I am is where I belong – quiet, peaceful, and at home, far from the madding crowd."