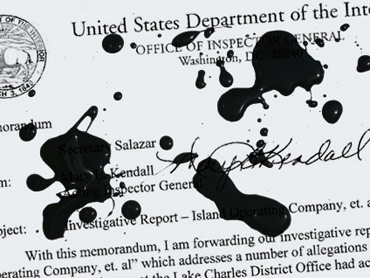 When the disaster movies are made about the catastrophic oil spill in the Gulf of Mexico, BP and the Minerals Management Service (MMS) of the United States Interior Department will have starring roles as the evil villains.

As the oil giant's head man, Tony Hayward stands for BP's poor safety record; its flawed decision-making, leading to the deaths of 11 rig workers and the flow of millions of gallons of oil; its lack of an adequate clean-up plan; and its apparent inability to accurately measure how much oil has flowed (and still is flowing) into the Gulf.

The role of the MMS, which is deserving of equal billing in the disaster, is documented in a report by Tim Dickinson in Rolling Stone.

In the detailed article, Dickinson describes how the Obama administration knew that the MMS needed a major overhaul to eliminate corruption in the agency, as well as to better regulate offshore drilling, but did little to effect changes.

Dickinson describes the role of Ken Salazar, who was brought in by President Obama to clean up the Interior Department in January 2009. He promised to "set the standard for reform" when he addressed the MMS team at its Denver headquarters:

"Salazar did little to tamp down on the lawlessness at MMS, beyond referring a few employees for criminal prosecution and ending a Bush-era program that allowed oil companies to make their 'royalty' payments - the amount they owe taxpayers for extracting a scarce public resource - not in cash but in crude. And instead of putting the brakes on new offshore drilling, Salazar immediately throttled it up to record levels. Even though he had scrapped the Bush plan, Salazar put 53 million offshore acres up for lease in the Gulf in his first year alone - an all-time high.

"Though he criticized the actions of 'a few rotten apples' at the agency, he left long-serving lackeys of the oil industry in charge. "The people that are ethically challenged are the career managers, the people who come up through the ranks," says a marine biologist who left the agency over the way science was tampered with by top officials. "In order to get promoted at MMS, you better get invested in this pro-development oil culture." One of the Bush-era managers whom Salazar left in place was John Goll, the agency's director for Alaska. Shortly after the Interior Secretary announced a reorganization of MMS in the wake of the Gulf disaster, Goll called a staff meeting and served cake decorated with the words Drill, baby, drill."

The Obama administration is planning to turn up the heat on MMS. In his Oval Office address last week, Mr. Obama said, "Over the last decade, this agency has become emblematic of a failed philosophy that views all regulation with hostility - a philosophy that says corporations should be allowed to play by their own rules and police themselves." He appointed Michael R. Bromwich, former Assistant U.S. Attorney and Justice Department Inspector General, to reform the MMS.

However, reshaping the agency's culture and eliminating the cozy relationship between the oil companies and regulators will take years, not months.

Who will be the good guy heroes in the movie? The White House has a checkered record so far. While the president said he was doing everything he could and staying on top of the situation since Day One, he didn't appear to be fully engaged, or enraged, as over the last two months BP continually fumbled the recovery and become less credible.

The heroes of this disaster, and subsequent movie, will be the people of the Gulf, from the private or public sector, who are working to save their environment and jobs.