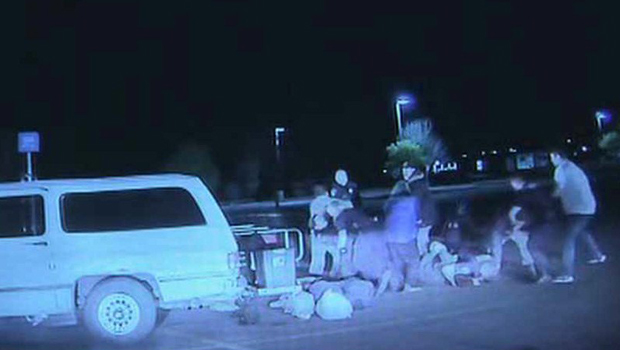 It happened in a Walmart parking lot on March 21 in Cottonwood, a small town in northeast Arizona. CBS affiliate KPHO-TV in Phoenix reported officers responded after an employee called to complain that someone from the family had assaulted her.

Cottonwood Police Chief Jody Fanning said Friday that when four Cottonwood officers arrived to talk to the Gaver family, they were attacked with punches and threats by the father and five sons.

Fanning said even after four additional officers arrived, pepper spray, batons and stun guns were not enough to stop the melee. He described the family's fighting tactics as "taught."

"Their main mode to fight is to grab the officers' faces, eyes, ears and mouth and try and pull as hard as they possibly can," Fanning said. "When they get Tased, they roll to try to break the strings so the electricity stops."

Two minutes and 30 seconds into the video, Sgt. Jeremy Daniels yelled, "He's got my gun!" Seconds later, Daniels was shot in the leg.

While Daniels was lying on the ground, another officer fired one shot at 28-year-old David Gaver, who suffered a gunshot wound to the stomach.

That same officer then shot and killed 21-year-old Enoch Gaver, who investigators said was still holding onto Daniels' loaded gun.

Altogether, the confrontation lasted longer than eight minutes, including three minutes after the shooting.

Two juveniles, an 11-year-old girl and 15-year-old boy, were also arrested but not identified. Court documents show some of the defendants have been assigned attorneys, but they are not identified.

According to KPHO-TV, the family was living out of its Chevrolet Suburban and were part of a traveling band called Matthew 24 Now, a reference to a Bible verse dealing with the end of times. The band's Facebook page is rife with Biblical references, the station said.

A Walmart loss prevention employee, whom Cottonwood police knew, was also key in preventing more harm being done to family members or the original four officers on the scene, Fanning said. The employee fought to protect the officers throughout the brawl.

Fanning said he was not only proud of his officers and the Walmart employee for their roles, but of the civilians who came to the aid of Daniels.

At the end of the video, Daniels was helped back to his patrol car and driven to the hospital. He is expected to make a full recovery; seven other officers suffered minor injuries.

The Department of Public Safety is investigating the incident. A spokesman said Friday the department will conclude its investigation in about a month.

Cottonwood Police said since the incident, seven of the department's 36 officers are now wearing body cameras and there are plans to order more.