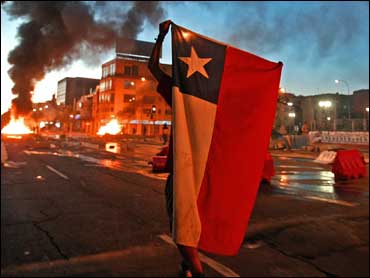 Some in Chile celebrated with champagne but for others, there was no joy in death of Gen. Augusto Pinochet, only the sense of a final injustice committed by the dictator who brutally ruled the country for 17 years.

For victims, Pinochet's demise dashed hopes that he would ever face justice for the torture and killings that were the hallmarks of his 1973-1990 regime.

When he died Sunday at the military hospital where he was being treated for a Dec. 3 heart attack, celebrations broke out around the Chilean capital. At a major plaza, hundreds of cheering, flag-waving people gathered to pop champagne corks and toss confetti.

Outside the hospital where Pinochet died, Chileans who believed he saved them from communism wept and hoisted posters with the general's image. Some chanted that Pinochet and his feared secret police were Chile's saviors.

"He will live forever in my memory — I love him as much as my own children," said Margarita Sanchez.

Police clashed with demonstrators who threw rocks and erected fire barricades that sent up thick plumes of smoke and blocked traffic on the city's main avenue. Tear gas and water cannons were used to disperse the protesters, many of them masked, who quickly regrouped.

Officials blamed the violence on a small contingent among the thousands of demonstrators who poured into the streets to denounced Pinochet's legacy. At least two bank offices were damaged.

The clashes spread past midnight to several working-class districts and police said 23 officers, including a major and a captain, were injured.

Deputy Interior Minister Felipe Harboe said there had been a number of arrests but did not give a figure.

"The government makes an appeal to peace," Harboe said. "We do not want people to be affected today by facts of the past."

Pinochet overthrew socialist President Salvador Allende at a time when the U.S. was working to destabilize his Marxist government and keep Chile from exporting communism in Latin America. But the world reacted in horror as Santiago's main soccer stadium filled with political prisoners to be tortured, killed or forced into exile.

Although his dictatorship laid the groundwork for South America's most stable economy, Pinochet will be remembered as the archetype of the era's repressive rulers who proliferated throughout Latin America and, in many cases, were secretly supported by the United States.

Chile's government says at least 3,197 people were killed for political reasons during Pinochet's rule, but courts allowed the aging general to escape hundreds of criminal complaints as his health declined.

"This criminal has departed without ever being sentenced for all the acts he was responsible for during his dictatorship," lamented Hugo Gutierrez, a human rights lawyer involved in several lawsuits against Pinochet.

As the mustachioed Pinochet crushed dissent during his 1973-90 rule, he left little doubt about who was in charge. "Not a leaf moves in this country if I'm not moving it," he once said.

Within years, Chile and other South American countries with right wing governments launched Operation Condor to eliminate leftist dissidents abroad. One of Operation Condor's victims was former Chilean Foreign Minister Orlando Letelier, who was killed along with his American aide, Ronni Moffitt, when a bomb shattered their car in Washington in 1976.

But when it came to his regime's abuses, Pinochet refused for years to take responsibility, saying any murders of political prisoners were the work of subordinates. Then on his 91st birthday — just last month — he took "full political responsibility for everything that happened" during his long rule. The statement read by his wife, however, made no reference to the rights abuses.

Lorena Pizarro, president of an association of relatives of the dictatorship's victims, called Pinochet genocidal and said it was ironic he had died "on Dec. 10, the international day of human rights."

But the office of former British Prime Minister Margaret Thatcher, Pinochet's staunchest ally in Britain, said she was "greatly saddened" by his death.

While some former U.S. presidents quietly supported Pinochet, the current administration of George W. Bush has good ties with Chile's free-market Socialist President Michelle Bachelet, whose father, a Pinochet opponent, died after being tortured in prison.

"Our thoughts today are with the victims of his reign and their families," said White House spokesman Tony Fratto.

Chile's government said Sunday that Pinochet will not receive the state funeral normally granted to former presidents, but only military honors at the Santiago military academy.

Recently, Bachelet said it would be "a violation of my conscience" to attend a state funeral for him.

Early Monday, Pinochet's coffin was transferred to the Military Academy.

The coffin, covered with a Chilean flag and Pinochet's military hat and sword, was placed in a large hall, but the media was kept at a distance and could hardly see it through large windows.

As he requested, Pinochet will be cremated, according to son Marco Antonio, to avoid desecration of his tomb by "people who always hated him."

The government said it had authorized the Chilean flag to be flown at half-staff at military barracks nationwide.

Pinochet took power on Sept. 11, 1973, demanding an unconditional surrender from Allende as warplanes bombed the presidential palace. Instead, Allende committed suicide with a submachine gun he had received as a gift from Fidel Castro.

Pinochet disbanded Congress, banned political activity and crushed dissent. Chile's economy was already in ruins when he launched a radical free-market program that at first triggered financial collapse and dire unemployment. But it opened the way for South America's healthiest economy, which has grown by 5 percent to 7 percent a year since 1984.

Pinochet lost an October 1988 referendum to extend his rule, then lost an election to Patricio Alywin, whose center-left coalition has ruled Chile since 1990.

Pinochet avoided prosecution for years after his presidency. But in 1998, after traveling to London for back surgery, he was placed under house arrest when a Spanish judge issued a warrant seeking to try him for human rights violations. British authorities decided he was too ill to stand trial and sent him home in March 2000.

Back in Chile, more than 200 criminal complaints were filed against him. Although he was under house arrest at the time of his death, no case ever reached trial because of his poor health.