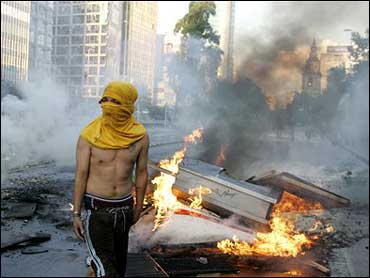 Gen. Augusto Pinochet, who overthrew Chile's democratically elected Marxist president in a bloody coup and ruled this Andean nation for 17 years, died Sunday, dashing hopes of victims of his regime's abuses that he would be brought to justice. He was 91.

Pinochet suffered a heart attack a week ago and underwent an angioplasty, and the brief announcement by the Santiago Military hospital said his condition worsened suddenly on Sunday. Dr. Juan Ignacio Vergara, spokesman for the medical team that had been treating him, said his family was with him when he died.

Vergara said Pinochet died at 2:15 p.m., surrounded by his family, according to the Chilean daily La Tercera.

Police surrounded the hospital, but by late afternoon about 5,000 Pinochet supporters had gathered at the entrance, according to Chilean television. The supporters, including some weeping women, repeatedly called out "Long Live Pinochet!" and sang Chile's national anthem.

Violent clashes broke out between police and Pinochet opponents who threw rocks at cars and set up fire barricades on the city's main avenue. Police used tear gas and water cannons to disperse the crowd. Authorities said there were a number of arrests, but no immediate reports of injuries.

Chile's government says at least 3,197 people were killed for political reasons during Pinochet's rule, but after leaving the presidency in 1990 the former dictator escaped hundreds of criminal complaints because of his declining physical and mental health.

Pinochet took power on Sept. 11, 1973, demanding an unconditional surrender from President Salvador Allende as warplanes bombed the presidential palace in downtown Santiago. Instead, Allende committed suicide with a submachine gun he had received as a gift from Fidel Castro.

As the mustachioed Pinochet crushed dissent during his 1973-90 rule, he left little doubt about who was in charge. "Not a leaf moves in this country if I'm not moving it," he once said.

But when it came to his regime's abuses, Pinochet refused for years to take responsibility, saying any murders of political prisoners were the work of subordinates. Then on his 91st birthday — just last month — he took "full political responsibility for everything that happened" during his long rule. The statement read by his wife, however, made no reference to the rights abuses.

"The death of General Augusto Pinochet gives some closure to the victims and families of those who were tortured and killed during a dark and repressive period in Chilean history," says CBS News foreign affairs analyst Pamela Falk, "although the inability to bring him to trial for the crimes of his regime leaves many victims, including the current President, Michelle Bachelet, who was a victim of torture, without the closure that justice would have provided."

Pinochet, born Nov. 25, 1915, the son of a customs official in the port of Valparaiso, was commander of the army at the time of the 1973 coup, appointed 19 days earlier by the president he toppled.

The CIA tried for months to destabilize the Allende government, including financing a truckers strike that paralyzed the delivery of goods across Chile, but Washington denied having anything to do with the coup.

In the days following Pinochet's seizure of power, soldiers carried out mass arrests of leftists. Tanks rumbled through the streets of the capital.

Many detainees, including Americans Charles Horman and Frank Teruggi, were herded into the National Stadium, which became a torture and detention center. The Americans were among those executed by the Chilean military, their deaths chronicled in the 1982 film "Missing."

Other leftists were rounded up by a death squad known as the "Caravan of Death." Victims were buried in unmarked mass graves in the northern Atacama desert and in the coastal city of La Serena.

Pinochet pledged to stay in power "only as long as circumstances demand it," but soon after seizing the presidency, he said he had "goals, not deadlines."

Pinochet disbanded Congress, banned political activity and started a harsh anti-leftist repression. At least 3,197 people were killed, more than 1,000 others are unaccounted for, and thousands more were arrested, tortured and forced into exile.

Within years, Chile and other South American countries with right wing governments launched Operation Condor to eliminate leftist dissidents abroad. One of Operation Condor's victims was former Chilean Foreign Minister Orlando Letelier, who was killed along with his American aide, Ronni Moffitt, when a bomb shattered their car in Washington in 1976.

In May 2005, some of the strongest evidence against Pinochet emerged, when Gen. Manuel Contreras, the imprisoned head of the former dictatorship's secret police, gave Chile's Supreme Court a list describing the fate of more than 500 dissidents who disappeared after being arrested by the secret police. Most were killed, their bodies flung into the sea.

Contreras, who is serving a 12-year sentence for the disappearance of a young dissident in 1975, said Pinochet was responsible. Pinochet blamed all the abuses on subordinates.

"Justice has been too generous with Pinochet," said Viviana Diaz, whose father was among the disappeared. She said the fact that Pinochet was never punished "is the impotence that we have, and the reason for the fight we have waged all these years to eliminate impunity in our country."

Pinochet defended his authoritarian rule as a bulwark against communism — and even claimed part of the credit for the collapse of communism. He repeatedly said he had nothing to ask forgiveness for.

"I see myself as a good angel," he told a Miami Spanish-language television station in 2004.

With his raspy voice, he often spoke in a lower-class vernacular that comedians delighted in mimicking. But his off-the-cuff comments sometimes got him into trouble.

Once, he embarrassed the government by saying that the German army was made up of "marijuana smokers, homosexuals, long-haired unionists." On another occasion, he drew criticism by saying the discovery of coffins that each contained the bodies of two victims of his regime's repression was a show of "a good cemetery space-saving measure."

Shrewd and firmly in command of his army, Pinochet saw himself as the leader of a crusade to build a society free of communism. Amid the upheaval in 1973, the economy was in near ruins, partly due to the CIA's covert destabilization efforts.

Pinochet launched a radical free market economic program that, coupled with heavy foreign borrowing and an overvalued peso, triggered a financial collapse and unprecedented joblessness in the early 1980s. Eventually, the economy recovered and since 1984 Chile has posted growth averaging 5 percent to 7 percent a year.

Key to the economic recovery was a group of mostly young economists known as the "Chicago Boys" for their studies under University of Chicago professor and Nobel laureate Milton Friedman. They lifted most state controls over the economy, privatized many sectors and strongly encouraged foreign investment with tax and other guarantees.

Pinochet tried to remain in control of the nation of 15 million people, but Latin America was gravitating toward civilian rule. On Oct. 5, 1988, he lost a national referendum on a proposal to extend his rule until 1997. He was forced to call a presidential election, which was won by center-left coalition candidate Patricio Aylwin.

Pinochet handed over power to Aylwin in March 1990 but remained army commander for eight more years and then was a senator-for-life, a position guaranteed under the constitution written by his regime.

In 1998, Pinochet traveled to London to undergo back surgery, but was placed under house arrest after a Spanish judge issued a warrant seeking to try him for human rights violations. British authorities decided he was too ill to stand trial and sent him home in March 2000.

Back in Chile, ghosts of the past dogged the retired general. More than 200 criminal complaints were filed against him, one involving the Caravan of Death.

But on July 9, 2001, a court ruled that Pinochet could not face trial because of his poor physical and mental health after court-appointed doctors diagnosed him with a mild case of dementia. A 2004 case against Pinochet was also stopped because he was found unfit to stand trial.

Still, his foes and relatives of his regime's victims kept trying to bring him to trial, successfully having him indicted and held under house arrest several times. But chances of any case reaching trial always appeared dim.

In 2004, a U.S. Senate investigative committee found Pinochet kept multimillion dollar secret accounts at the Riggs Bank in Washington. In all, investigators said he had up to $17 million in foreign accounts, and Chilean courts charged Pinochet with owing $9.8 million in back taxes. He was also indicted on tax evasion charges, along with his wife and three children.

While many of his military and civilian followers staunchly supported him throughout his legal battle against human rights accusations, he was isolated and almost abandoned as the money dealings became public. Many expressed frustration and disappointment.

"We deserve an explanation for this," said retired Gen. Rafael Villarroel, once one of Pinochet's closest aides.

Since the mid-1990s, Pinochet led a mostly secluded life between his heavily guarded Santiago mansion and his countryside residence. He rarely appeared in public other than for checkups at the Santiago army hospital.

Associates said he lost interest in politics and rarely paid attention to news. During family gatherings he would remain mostly silent, looking frail and tired.

His health declined steadily. In 1992 he received a pacemaker. He suffered from diabetes and arthritis and had at least three mild strokes beginning in 1998.

He is survived by his wife, Lucia, who headed a volunteer women's organization dedicated to helping the poor, two sons and three daughters.