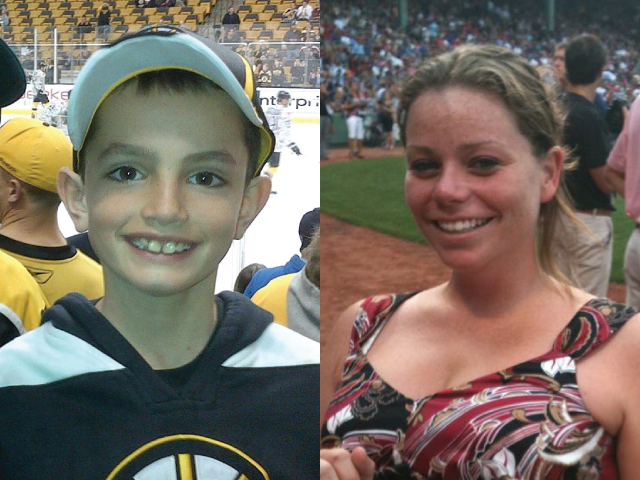 Campbell, 29, was a restaurant manager who was at the race with her best friend, her father William Campbell told the Associated Press. He described his daughter as a "very caring, very loving person," adding that she "was daddy's little girl."

The chief of staff to Medford Mayor Michael J. McGlynn told CBS News that Campbell died instantly at the scene.

Through tears, Campbell's mother Patty Campbell called her daughter a "wonderful person" who was loved by everyone who knew her.

"She was always smiling, friendly," said Patty Campbell. "I couldn't ask for a better daughter. And I can't believe this is happening."

Patty Campbell and her husband William were initially informed that their daughter was alive and in surgery. When they got to Mass General hospital they discovered that the young woman being operated on was not their daughter.

Also killed in the attack was Martin Richard, an 8-year-old boy from a tight-knit community in Dorchester, Mass.

The Chinese Consulate in New York says a Chinese national is the third person killed in the Boston marathon blasts. The name has not been released yet, though.

Boston University identified the third known fatality was as a Boston University graduate student late Tuesday afternoon. His or her name has not been released at the request of the family.

"My dear son Martin has died from injuries sustained in the attack on Boston," his father, Bill Richard, said in a statement. "My wife and daughter are both recovering from serious injuries. We thank our family and friends, those we know and those we have never met, for their thoughts and prayers. I ask that you continue to pray for my family as we remember Martin. We also ask for your patience and for privacy as we work to simultaneously grieve and recover."

"They're dear, dear friends to the community, to ourselves, to our neighbors, and this is a very, very difficult time," Judy Tuttle, who serves on the Ashmont Adams Neighborhood Association with Denise Richard, told CBSNews.com.

Locals gathered Monday night at Tavolo Restaurant in Dorchester to mourn the family's loss and discuss what they knew about their condition. An employee who answered the phone at the restaurant described owner Chris Douglass as "heartbroken" and said a process had begun to coordinate a fund to help the Richards.

"We're really saddened by the loss for the family," he said. "They were really close."

The word "peace" and phrase "Pray for Martin" was written in chalk on the sidewalk outside the family's home and at a nearby park. Neighbors and well wishers left flowers at the entrance to the home throughout the day.

Martin Richard had been a student at Pope John Paul II Catholic Academy. In a statement, the school described him as a "kind, caring, and loving young boy who had great excitement for learning." Denise Richard is the librarian at the school, which Jane Richard attended with her brother Martin.

Neighbor Betty Delorey told the Associated Press that Martin Richard loved to climb trees in the neighborhood; he was also described as loving to ride his bike and play baseball. A vigil will be held tonight for Martin at his family's parish in Dorchester.

Krystle Campbell was hailed on the Facebook page of Hordon Health gym in Boston as someone who "was seldom caught not smiling, and not expressing her opinion."

"She was beautiful, she was loud, and everyone loved her for it," the Facebook post said. "Along with the million dollar smile came head to toe freckles and gorgeous bright red hair, connecting her Irish roots and kid-like manor; it was easy to feel ten years younger around her, no matter who you were. She had tremendous passion and energy, and Krystle attacked life with vigor and excitement."

"She's been doing it since she was a little girl," said Lillian Campbell. "She didn't miss a marathon, watching it at the finish line." She added that Krystle Campbell had taken care of her "for almost two years" after an operation.

"She's a hard worker and she was always right there if you needed her," she said. "All you had to do was call Krystle, and she was there."

Other victims escaped the attack with their lives, but many face a dramatically different future. There are currently 27 victims from the blasts hospitalized in critical condition, and 90 people remain hospitalized in six Boston area hospitals.

Wakefield resident Liz Norden told the Boston Globe that two of her sons lost a leg in the bombings.

"I'd never imagined in my wildest dreams this would ever happen," she said while sitting on a bench outside an emergency room on Monday.

On his Facebook page, the father of a 27-year-old man who was shown being wheeled away from the scene said doctors had amputated both of his son's legs. Jeff Bauman Jr., who was at the race to watch his girlfriend run, had to have both legs removed because of vascular and bone damage.

"Can everyone pray for my son Jeff Jr.?'' Jeff Bauman Sr. wrote on Facebook, the Lowell Sun reported.

He added: "I just can't explain what's wrong with people today to do this to people. I'm really starting to lose faith in our country."