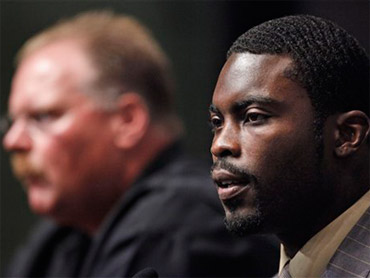 (AP)
Will the city of brotherly love also come to be known as the city of second chances? Shortly after Michael Vick was named an Eagle,fans were already enraged that their favorite team could stand by a man who had exhibited such cruelty to animals in the past. Some are ticked off at the NFL for allowing a person to hold a job after a felony conviction when most other employers would not allow them back on the premises. You don't have to follow football to realize why this story becomes the "water cooler" story of the weekend and perhaps the biggest story of the NFL heading into this season. Do you believe in second chances and that prison sentences wipe the record clean for past crimes or do you think that Michael Vick's actions were so egregious that there is no repentance possible? Do you believe in redemption?

Sports fans can be notoriously fickle. While they berate cheaters on the cover of tabloids for taking performance enhancing drugs, when that cheater makes a home run in extra innings to win the game, those same fans stand up and cheer. There is probably an entire section of academia devoted to studying sports psychology but it seems like in any other arena, people have a morbid fascination in constructing and deconstructing their heroes.

Watch CBS Videos Online
There also seems to be a debate at the definition of what qualifies as a human mistake. The NFL is no stranger to its share of athletes who have been in trouble with the law thanks to bar brawls and DUIs (some ending in fatal accidents), but critics of Vick say that his premeditated actions year after year in orchestrating dog fighting rings is not a small mistake, its part of who he is. Some like to point out that cruelty to animals is usually a precursor to cruelty to other human beings.

The Eagles are taking an enormous risk, but if they had not, it seems inevitable that some other team would have. Vick was arguably one of the best quarterbacks in the league when he was ousted. Whether prison freezes time, and Vick is capable of rising to perform at the level required to stay exceptional and stay alive in the NFL won't be known at least until the last two pre-season games of the year, and perhaps not until game six during the regular season if he is reinstated completely into the NFL and allowed to suit up.

As far as comebacks go, I just enjoyed watching Lance Armstrong's in the Tour De France. It isn't a contact sport unless of course you begin to factor the damage that contact with the ground can do while descending the Alps or the Pyrenees at 50-60mph on a 14 pound two-wheeled sled. Given that Lance didn't "win" the race for several reasons, the most important being that he was not the best cyclist in the race, the fact that he was able to place on the podium after such a respite is an exceptional human achievement. Perhaps Lance is truly riding for a cause higher than himself, but Vick doesn't have a legion of Cancer survivors cheering him on.

Regardless of how many photo opportunities Vick's work with the local Humane Society generates, he has to become comfortable with the fact that he will always have detractors that would like to be as brutal to him as he was to those dogs. Perhaps more painful will be the number of times he will have to explain to his three young children why people stare at their dad the way they do.

In a sport that has ceded some of its gladiatorial tendencies to Ultimate Fighting and Mixed Martial Arts, there is now a clear villain for mobs in the stands to root against. Week after week, in one arena after another, there will inevitably be an added tension when Vick takes the field. Will the ultimate punishment be meted out by a dog loving linebacker who makes a late hit, after considering that a fine maybe a small price to pay in order to make Michael Vick feel like one of the dogs he abused?