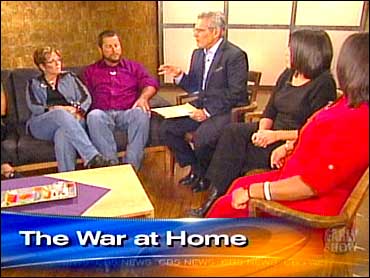 Some of America's 25 million veterans face their biggest fight when they return home from the battlefield -- when they take on mental illness.

And, a CBS News analysis reveals they lose that battle, and take their own lives, at a clip described by various experts as "stunning" and "alarming," according to Chief Investigative Correspondent Armen Keteyian. One called it a "hidden epidemic."

He says no one had ever counted just how many suicides there are nationwide among those who had served in the military -- until now.

The five-month CBS News probe, based upon a detailed analysis of data obtained from death records from 2004 and 2005, found that veterans were more than twice as likely to commit suicide in 2005 as non-vets.

A recent Veteran Affairs Department estimate says some 5,000 ex-servicemen and women will commit suicide this year, largely as a result of mental health issues, and Keteyian says, "Our numbers are much higher than that, overall."

He says the numbers in the CBS News study shocked everyone from Sen. Patty Murray (D, Wash.) to veterans' rights advocate Paul Sullivan.

Murray told Keteyian, "That's a lot of young men and women who've gone to fight for us, and come home and found themselves that lost."

Said Sullivan, "This is pulling the fire alarm to say our veterans need help now."

"The war didn't end foe him when he came home," says his mother, Jean Willis. "I think he was being tormented and tortured by his experiences."

Medical records show Reyes suffered severe psychological trauma after witnessing "multiple dead" and having to "sort through badly mutilated bodies," Keteyian reports. Earlier this year, a month after separating from the Army, Reyes hanged himself with a cord in his apartment. He was 26.

Willis and members of four other families recently sat down together to talk to Keteyian about losing loved ones, all veterans of Iraq, to suicide.

"Was their any sense that they were having problems at all?" Keteyian asked.

Mia Sagahon's boyfriend, Walter, shot himself at 27, about a year-and-a-half after coming back from Iraq.

A weeping Sagahon remarked, "I just didn't realize -- that it could... I didn't think he was thinking about killing himself. Otherwise, I would have taken him wherever he needed to go."

Joyce Lucey observed, "I think that's what families are left with -- the guilt about what could have been done, and what we should have done."