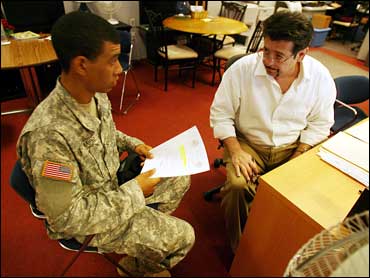 Veterans advocates are venting anger and frustration toward the biggest charity within the U.S. military after revelations that it has been packing more money into reserves than it has spent on aid during the wars in Iraq and Afghanistan.

"We have so many soldiers, reservists and National Guard who are in dire need, and for the Army to be holding this much money in reserve is despicable," chairman Bob Handy of Veterans United for Truth, of Santa Barbara, Calif., said Monday.

He was reacting to an Associated Press investigation that examined five years of tax returns by Army Emergency Relief and reported on interviews with dozens of soldiers, veterans and officials from other military charities.

From 2003 to 2007, the charity, also known as AER, packed $117 million into its own reserves while spending just $64 million on direct aid, records show. By contrast, smaller Navy and Air Force charities both put far more of their resources into aid than reserves. Also, more than 90 percent of AER's aid was given as no-interest loans, not outright grants.

Though tax-exempt and legally separate, AER operates largely under Army control, the AP found. Soldiers are squeezed for contributions, often rewarded for them in violation of regulations, and sometimes delayed in transfers or promotions when loans aren't repaid.

AER, which operates on 90 Army sites worldwide and grew into a $345 million colossus during the Iraq war, is meant to help active-duty soldiers and Army retirees with their cash emergencies and to provide college scholarships to their families.

In written comments Monday, AER said it has been giving generously. "AER has always met the need for financial assistance. No soldier or family member has ever been denied financial assistance for a valid need due to a lack of funds," said retired Col. Andrew H. Cohen, the charity's national treasurer at its headquarters in Alexandria, Va.

He said the charity's expenses fail to provide a complete picture of its performance. He said the total value of assistance, counting loan and grant dollars as equal, has grown every year since 2003.

At a news conference Monday outside El Paso, Texas, Col. Ed Manning, commander of Fort Bliss, said that the charity works well and he was "just kind of surprised that there'd be a question about the money." He said the charity at his post of 20,000 soldiers had distributed $2.9 million over the past year, though he acknowledged that it was mostly in loans.

He said soldiers contribute entirely of their own will, but he defended rules that make needy soldiers request aid through an Army superior. "It's good that a commander knows what's going on in his unit," Manning said.

"It just makes me sick to my stomach," said Amy Fairweather, director of the Iraq Veteran Project in San Francisco, a nonprofit that helps veterans with shelter and emergency payments. "There are resources that are not being used when organizations like ours ... are pounding the pavement every day in this tough economic time to bring in dollars to help our veterans."

"If they're sitting on all this money and there is a demonstrated need out there, they can expand their mission to meet the need," said Sullivan, an Army combat veteran who used to work as a project manager for the Department of Veterans Affairs.

Veterans for Common Sense and Veterans United for Truth are appealing the dismissal of a federal lawsuit they filed during the Bush administration over federal delays in providing disability benefits.