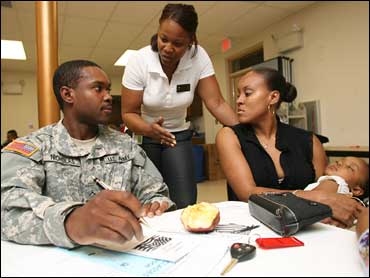 As soldiers stream home from Iraq and Afghanistan, the biggest charity affiliated with the U.S. military has been stockpiling tens of millions of dollars meant to help put returning fighters back on their feet, an Associated Press investigation shows.

Between 2003 and 2007 - as many military families dealt with long war deployments and increased numbers of home foreclosures - Army Emergency Relief grew into a $345 million behemoth. During those years, the charity packed away $117 million into its own reserves while spending just $64 million on direct aid, according to an AP analysis of its tax records.

Tax-exempt and legally separate from the military, AER projects a facade of independence but really operates under close Army control. The massive nonprofit - funded predominantly by troops - allows superiors to squeeze soldiers for contributions; forces struggling soldiers to repay loans - sometimes delaying transfers and promotions; and too often violates its own rules by rewarding donors, such as giving free passes from physical training, the AP found.

Founded in 1942, AER eases cash emergencies of active-duty soldiers and retirees and provides college scholarships for their families. Its emergency aid covers mortgage payments and food, car repairs, medical bills, travel to family funerals, and the like.

Instead of giving money away, though, the Army charity lent out 91 percent of its emergency aid during the period 2003-2007. For accounting purposes, the loans, dispensed interest-free, are counted as expenses only when they are not paid back.

AER executives defend their operation, insisting they need to keep sizable reserves to be ready for future catastrophes.

But smaller civilian charities for service members and veterans say they are swamped by the desperate needs of recent years, with requests far outstripping ability to respond.

While independent on paper, Army Emergency Relief is housed, staffed and controlled by the U.S. Army.

That's not illegal per se. Eric Smith, a spokesman for the Internal Revenue Service, said the agency can't offer an opinion on a particular charity's activities. But Marcus Owens, former head of IRS charity oversight, said charities like AER can legally partner closely with a government agency.

However, he said, problems sometimes arise when their missions diverge. "There's a bit of a tension when a government organization is operating closely with a charity," he said.

Most charity watchdogs view 1-to-3 years of reserves as prudent, with more than that considered hoarding. Yet the American Institute of Philanthropy says AER holds enough reserves to last about 12 years at its current level of aid.

Daniel Borochoff, president of the American Institute of Philanthropy, said that AER collects money "very efficiently. What the shame is, is they're not doing more with it."

National administrators say they've tried to loosen the purse strings. The most recent yearly figures do show a tilt by AER toward increased giving.

Still, Borochoff's organization, which grades charities, gives the Army charity an "F" because of the hoarding.

The AP findings include:

- Superior officers come calling when AER loans aren't repaid on time. Soldiers can be fined or demoted for missing loan payments. They must clear their loans before transferring or leaving the service.

- Promotions can be delayed or canceled if loans are not repaid.

- Despite strict rules against coercion, the Army uses pushy tactics to extract supposedly voluntary contributions, with superiors using language like: "How much can we count on from you?"

- The Army sometimes offers rewards for contributions, though incentives are banned by program rules. It sometimes excuses contributors from physical training - another clear violation.

- AER screens every request for aid, peering into the personal finances of its troops, essentially making the Army a soldier's boss and loan officer.

"If I ask a private for something ... chances are everyone's going to do it. Why? Because I'm a lieutenant," says Iraq war veteran Tom Tarantino, otherwise an AER backer. "It can almost be construed as mandatory."

Neither the Army nor Sgt. Major of the Army Kenneth Preston, an AER board member, responded to repeated requests for comment on the military's relationship with AER.

AER pays just 21 staffers, all working at its headquarters at Army Human Resources Command in Alexandria, Virginia. AER's other 300 or so employees at 90 Army sites worldwide are civilians paid by the Army. Also, the Army gives AER office space for free.

AER's treasurer, Ret. Col. Andrew Cohen, acknowledged in an interview that "the Army runs the program in the field." Army officers dominate its corporate board too.

Charities linked to other services operate along more traditional nonprofit lines. The Air Force Aid Society sprinkles its board with members from outside the military to foster broad views. The Navy-Marine Corps Relief Society pays 225 employees and, instead of relying on Navy personnel for other chores, deploys a corps of about 3,400 volunteers, including some from outside the military.

Army regulations say AER "is, in effect, the U.S. Army's own emergency financial assistance organization." Under Army regulations, officers must recommend whether their soldiers deserve aid. Company commanders and first sergeants can approve up to $1,000 in loans on their own say-so. Officers also are charged with making sure their troops repay AER loans.

"If you have an outstanding bill, you're warned about paying that off just to finish your tour of duty ... because it will be brought to your leadership and it will be dealt with," says Jon Nakaishi, of Tracy, California, an Army National Guard veteran of the Iraq war who took out a $900 AER loan to help feed his wife and children between paychecks.

In his case, he was sent home with an injury and never fully repaid his loan.

The Army also exercises its leverage in raising contributions from soldiers. It reaches out only to troops and veterans in annual campaigns organized by Army personnel.

For those on active duty, AER organizes appeals along the chain of command. Low-ranking personnel are typically solicited by a superior who knows them personally.

Spiegel, the AER administrator, said he's unaware of specific violations but added: "I spent 29 years in the Army, I know how ... first sergeants operate. Some of them do strong-arm."

Army regulations ban base passes, training holidays, relief from guard duty, award plaques and "all other incentives or rewards" for contributions to AER. But the AP uncovered evidence of many violations.

Before leaving active duty in 2006, Philip Aubart, who then went to Reserve Officer Training Corps at Dartmouth College, admits he gave to AER partly to be excused from push-ups, sit-ups and running the next day. For those who didn't contribute the minimum monthly allotment, the calisthenics became, in effect, a punishment.

"That enticed lots and lots of guys to give," he noted. He says he gave in two annual campaigns and was allowed to skip physical training the following days.

Others spoke of prizes like pizza parties and honorary flags given to top cooperating units.

Make no mistake: AER, a normally uncontroversial fixture of Army life, has helped millions of soldiers and families. Last year alone, AER handed out about $5.5 million in emergency grants, $65 million in loans, and $12 million in scholarships. Despite the extra demands for soldiers busy fighting two wars, AER's management says it hasn't felt a need to boost giving in recent years.

But the AP encountered considerable criticism about AER's hoarding of its treasure chest.

Jack Tilley, a retired sergeant major of the Army on AER's board from 2000 to 2004, said he was surprised by AP's findings, especially during wartime.

"I think they could give more. In fact, that's why that's there," said Tilley, who co-founded another charity that helps families of Mideast war veterans, the American Freedom Foundation.

What does AER do with its retained wealth? Mostly, it accumulates stocks and bonds.

AER ended 2007 with a $296 million portfolio; last year's tanking market cut that to $214 million, by the estimate of its treasurer.

Sylvia Kidd, an AER board member in the 1990s, says she feels that the charity does much good work but guards its relief funds too jealously. "You hear things, and you think, "`They got all this money, and they should certainly be able to take care of this,"' she said. She now works for a smaller independent charity, the Association of the United States Army, providing emergency aid to some military families that AER won't help.

Though AER keeps a $25 million line of bank credit to respond to a world economic crisis, its board has decided to lop off a third of its scholarship money this year. "We're not happy about it," Spiegel says.