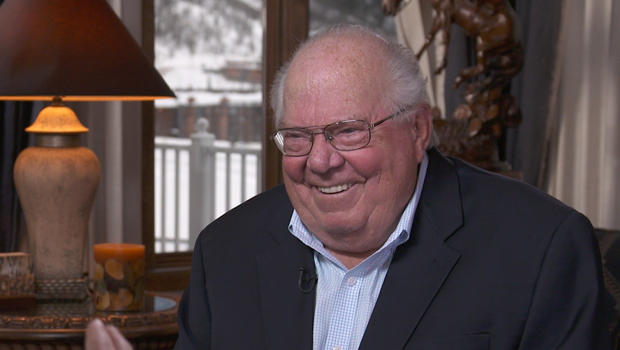 Verne Lundquist has been calling the shots for all kinds of sports here at CBS longer than most of us can remember -- and doing it better, Jim Axelrod reminds us, than just about anyone:

If you can’t place the voice, chances are you haven’t paid much attention to sports -- not just this year, but for the past half-century.

Verne Lundquist has made some of sport’s most memorable calls.

“The challenge is to be appropriate to the moment,” he said. “To not embellish the moment, to not overwhelm it.”

He’s an old-school craftsman, whose voice is pure baritone-on-the-next-barstool.

“You go four, five, six deep of calls that anybody would cut their left arm off to have presented to them as a sportscaster,” said Axelrod.

“How do you make sense of that?”

In a couple of hours, he’ll call another NCAA tournament game -- and in a couple of weeks he’ll be at his familiar perch on the 16th hole at The Masters.

At 76, Lundquist isn’t quite at the finish line of his career, but he can see it pretty clearly. Last December, he wrapped up 17 years as the play-by-play man for college football’s powerhouse Southeastern Conference. He was serenaded and saluted for months by the college football community, who made plain how they feel about the charming, folksy companion they call “Uncle Verne.”

“How do you articulate what that even feels like?” Axelrod asked.

“Well, I had to swallow hard and pinch my inner thigh to keep from crying,” Lundquist laughed.

But if you think giving up millions of people paying tribute to you is tough to do, you don’t know Verne Lundquist, who made his living from sports … but not his life.

When asked what music gives him, he replied, “A soul, a depth.”

“It touches some part of you?”

That soul is touched most deeply in the snowy Colorado Rockies, where for years Verne and his wife, Nancy, have been highly instrumental in the Strings Music Festival, which “Sunday Morning” first visited back in 1992.

Lundquist often lends his famous pipes as a master of ceremonies to something that may mean even more to him than a game.  “I’m used to talking about Alabama and Auburn. And we’ve got 20 million people watching. It doesn’t faze me.”

“Oh my God! And I walk out this door over here, and it’s a hard swallow. And you think, ‘Dear Lord, get me through this!’”

These days, Verne Lundquist is looking back with gratitude. Looking at a gift from his colleagues who wrote, “We’ll miss you,” Lundquist touched his heart: “It was palpable. ...  Well, I’ll miss them.”

Still, the lesson to be drawn from his life is that he’s also looking forward. That’s what happens when you have someone like Nancy right along with you. She’s traveled the world by his side in the booth for years.

“On our first date we discovered that we had this mutual love of symphonic and classical music,” Verne said. “And that was the first glue that we found to hold us together.”

“Here” is the city of Steamboat Springs, at its heart a ski resort attached to a ranching community.

What is the draw for them?  “The people,” said Nancy. “The people live here, work here. The friendships that we’ve accumulated over the years.”

It’s been their home for the last 33 years, and it’s a place where Lundquist can walk the streets during the winter carnival as both a next-door neighbor and a local hero.

“Is it still some satisfaction to know that as you walk down this street, the people seeing you go by go, ‘That’s Verne’?” asked Axelrod.

“Yeah, sure. Of course, yeah. Of course it is. It’s a reaffirmation of the fact that Nancy and I are welcomed,” he said, getting emotional. “This is home. This is home.”

Yes, Lundquist has it all -- a sense of place, passion and partnership. Not to mention some of the most memorable play-by-play calls in the history of sports.

As the man himself might say: Better to be lucky than good.  But best to be both.

“I am just so unbelievably appreciative of the way my career and my life has wound up,” he said.