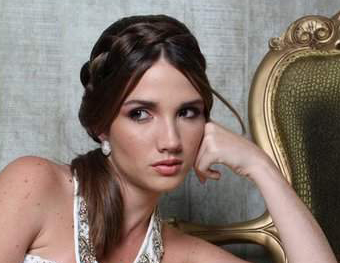 VALENCIA, Venezuela - A university student beauty queen was mourned Friday in the provincial Venezuelan city where she was slain this week during a political protest, a victim of what government opponents say is indiscriminate violence used by President Nicolas Maduro and his supporters to stifle dissent across the country.

Family members and friends of 22-year-old Genesis Carmona say the former Miss Tourism 2013 for the central Venezuelan state of Carabobo was shot down by members of the armed militias known as "colectivos" who opened fire on a demonstration in Valencia on Tuesday.

The government says the incident is under investigation, and Maduro said at a news conference Friday that it has been "well-established" by ballistics experts that shot came from the opposition protesters. Mourners at the private Mass and graveside memorial for Carmona said they have no doubt which side fired the fatal round.

"She wanted to support her country and, well, look what it cost her for going out with a flag and a whistle. Killed by government mercenaries," said Jose Gil, an uncle of Carmona.

The violence drew condemnation Friday from U.S. based watchdog group Human Rights Watch, which said: "Venezuelan security forces have used excessive and unlawful force against protesters on multiple occasions since February 12, 2014, including beating detainees and shooting at crowds of unarmed people."

The report also said "the government has censored the news media, blocking transmission of a TV channel and threatening to prosecute news outlets for their coverage of the violence."

The U.S. news channel CNN said Friday four of its journalists were notified by the Information Ministry that they are no longer allowed to report in the country. They include CNN en Espanol anchor Patricia Janiot.

The U.S. State Department also issued a warning Friday to U.S. citizens in Venezuela to "maintain a low profile and to avoid all areas of civil disruption."

Maduro has insisted that the protesters are "fascist" elements intent on fomenting a coup and pledged to crack down. On Thursday, a judge determined there was enough evidence to detain opposition leader Leopoldo Lopez, who surrendered to authorities a day earlier. The charges against Lopez include arson and criminal incitement related to a massive Feb. 12 rally.

Speaking Friday to international media, Maduro called out what he said was a "campaign of demonization to isolate the Bolivarian revolution."

People at Carmona's service who were also at Tuesday's rally said they saw a group of up to 50 men on motorcycles, armed with handguns fire directly into the crowd of about 3,000 demonstrators, setting off a panicked stampede through the street.

"We were protesting peacefully and this was like a war," said Emilio Morillo, an 18-year-old university student.

Kendry Gill, 22-year-old law student also at the rally, said nine people were shot, including a young woman who remains hospitalized in critical condition with a perforated lung.

"It was practically an ambush," Gill said. "We're peaceful. We don't have any weapons."

Carmona, who was in her final year in a marketing program at a university in Valencia, was not ardently political, friends and family said. Her uncle said she was drawn to the rally by the dismal economic conditions that the oil-rich country has experienced after 15 years of socialism-inspired policies and that her mother had gone with her to protect her.

"There's no food, no milk, no baby food ... It is horrible what is happening in this country," Gil said. "That's why she was out at the protest."

Carmona is one of at least eight people who have been killed during political protests roiling this South American country since massive opposition rallies on Feb. 12 ended with three deaths in the capital, including one government supporter. With even Maduro lamenting the tragedy during a speech on national TV, the young woman's death has resonated in part because she was a pageant winner in a country that has long prized its production of more Miss Universe winners than any other nation.

Her death also came amid increasing concern about escalating violence in the country, and has left many on edge as the opposition plans large rallies on Saturday.

The government said Thursday that it would send paratroopers to a border area torn by fierce clashes between police and anti-government protesters even as security forces are being accused of turning many parts of the country into free-fire zones in their bid to silence a rejuvenated movement challenging socialist rule.

The unrest has been particularly high in the western state of Tachira, on Venezuela's border with Colombia, where anti-government protesters have clashed with police and National Guard units, disrupting life in its capital, San Cristobal.

"These units will enable the city to function, so food can get in, so people can go about their normal lives," said Interior Minister Miguel Rodriguez Torres. "It's simply meant to restore order."

San Cristobal's mayor said the paratroopers would only exacerbate tensions in the city of 600,000. He accused the government of causing the troubles by cracking down on peaceful protests and cutting off vital services in the city, including public transportation and the Internet.

"Our problems can't be resolved with soldiers," Daniel Ceballos, a member of the opposition, told the AP. "We need gas, flour, medicine and toilet paper."

National Guard troops and members of pro-government militias have swarmed through the streets of Caracas and other cities firing volleys, at times indiscriminately, in repeated spasms of nighttime violence in recent days.

Henrique Capriles, the two-time presidential candidate of an opposition coalition, said the government is engaging in "brutal repression," in some cases breaking into apartment buildings to arrest people authorities accuse of being part of a plot for a coup against Maduro.

"What does the government want, a civil war?" Capriles asked at a news conference Thursday.

While several large demonstrations by thousands of people have been peaceful, smaller groups of protesters have lobbed fire bombs and rocks and blocked streets with flaming barricades of trash. Troops and police have responded with tear gas, rubber bullets and blasts from water cannons - as well as raids by gun-firing men from motorcycles.

The clashes with authorities as well as the pursuit of anti-government activists by troops and militias take place in darkness. During the day, Caracas has largely operated as normal, with businesses and schools open and people going about their business, while stocking up on groceries in case of further unrest.