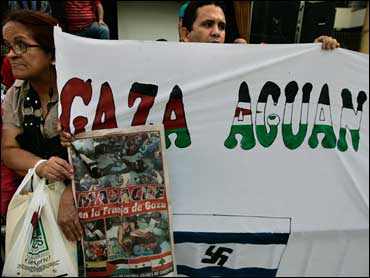 Venezuela ordered the expulsion of the Israeli ambassador and some embassy staff on Tuesday to protest Israel's military offensive in the Gaza Strip.

The decision by President Hugo Chavez, a longtime critic of U.S. and Israeli policy, to kick out the diplomats appeared to be the strongest reaction yet to the Gaza offensive by any country with ties to Israel.

Venezuela's Foreign Ministry announced the move in a statement, saying it "has decided to expel the Israeli ambassador and part of the personnel of the Israeli embassy."

The Israeli offensive in Gaza has killed nearly 600 Palestinians in ground and air strikes. Israel launched the attacks Dec. 27 to stop Palestinian militants from firing rockets into southern Israel.

Venezuela's Foreign Ministry said its U.N. mission is joining with other countries in demanding the Security Council "apply urgent and necessary measures to stop this invasion."

Officials could not immediately be reached at the Israeli Embassy in Caracas, which had closed by the time of the announcement.

Chavez earlier condemned the Israelis carrying out the military campaign as "murderers" and urged Jews in Venezuela to take a stand against the Israeli government.

"Now I hope that the Venezuelan Jewish community speaks out against this barbarism. Do it. Don't you strongly reject all acts of persecution?" Chavez said.

"How far will this barbarism go?" he said in an appearance on state television. "The president of Israel should be taken before an international court together with the president of the United States, if the world had any conscience."

While many countries have protested Israel's offensive, none so far has expelled the ambassador.

Mauritania, which established relations with Israel in 1999, called home its ambassador from the Jewish state on Monday.

Jordan and Egypt, the other two Arab nations with relations with Israel, summoned their Israeli ambassadors to protest the Gaza attacks, but they have resisted popular calls to expel them.

Chavez has long been critical of the Israeli government's policies in the Middle East and has supported the Palestinians' stance in the conflict.

During Israel's 2006 conflict in Lebanon, Chavez withdrew his top envoy from Israel, calling the bombings there "a new Holocaust."

In spite of its criticisms of Israel, Chavez's government has insisted it is friendly toward Jewish people.

Chavez met with Jewish leaders in August, pledging to work against anti-Semitism despite strong differences on Mideast politics.

He called on Israelis to "stand up against" their government. As for those leading the offensive in Gaza, he said, "they are cowards - bombing innocent people. What great soldiers they are, how brave the soldiers of Israel are."

Protests against the offensive have been held in Venezuela and other Latin American countries in recent days.

In Argentina, which has the third-largest Jewish population outside Israel as well as a sizable population of Arab descent, hundreds of people marched to the Israeli Embassy in Buenos Aires to call for an end to the offensive.

Brazil's government says it is sending 14 tons of medicine and food to the Gaza Strip. And in Bolivia, about 100 Palestinians and Arabs marched to protest the violence.