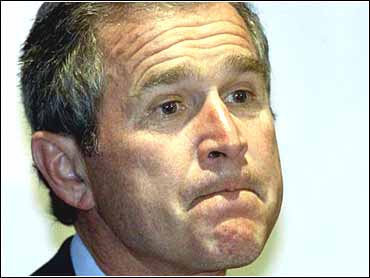 For paid connoisseurs of political gossip, there's nothing quite like the days before a nominee for vice president is picked. A year like this, with two selections, is a rare and fine vintage.

Political reporting becomes sports reporting. Constructing potential Veep shortlists is just like making mock drafts in the NBA and NFL -- a combination of real reporting, gossip, wishful thinking and make-believe goofing around by would-be general managers. Or campaign managers. Based on such conjectural compilations, guests are booked on Sunday talk shows, camera crews are sent to stake out Midwestern governors and charter planes are put on standby.

And then the real announcement comes, the speculative escapades cease and, hopefully, no one gets hurt.

Here then is the GOP Mock Vice-Presidential Draft Snapshot on the eve of the Big Decision Weekend. Please note that this snapshot is by definition obsolete by the time you finish reading it.

The top story has to be the McCain Boomlet. It's already over, but it's still the most fun. The gist of the dish is that McCain indicated to Pennsylvania Gov. Tom Ridge his newfound willingness to accept the VP nomination, and that this in turn somehow reflected a newfound willingness on Bush's part to consider McCain, thus giving a newfound plausibility to the Bush-McCain scenario, which would be a great story.

The boomlet appears to have been ham-handedly orchestrated by Rep. Lindsey Graham of South Carolina, a McCain backer, and his pal, Rep. Tom Davis of Virginia. They’re circulating a letter around Capitol Hill urging Bush to pick Big John.

The response from Bush's operatives was to go ballistic, to use a technical term. Some staffers were reportedly convinced the whole thing was a wily plot concocted by McCain to get himself on the ticket. McCain's direct complicity aside, Bush's camp felt the boomlet was disrespectful to the governor, that it dirtied the selection process and that it couldn't help but make Bush's eventual choice seem like a B-teamer.

The public face of this reaction was evident in the icy response Bush campaign spokeswoman Karen Hughes gave to The New York Times: "Gov. Bush has said all along that he takes Sen. McCain at his word that he does not wish to be considered for the vice presidency." Hiss.

So by Friday morning, it appeared that to the degree the McCain resurrection was ever anything more than a fantasy, it was now stillborn. Tightened numbers in new polls, including CBS News', along with reports that Bush wanted to choose someone with "national" stature, created a foundation for the McCain chatter. But when the dust settled it seeme that the machinations by McCain's proxies iced the anointment pipe dream. McCain won't be the first pick. We think. Maybe. Probably not.

A subplot of this brief saga is that Gov. Ridge, the onetime VP favorite, has fallen out of contention completely. Ridge is the guy many Democratic operatives would least like to run a campaign against -- after Colin Powell, of course. But Ridge is pro-choice, and this week's Conventional Wisdom coalesced around the view that Bush would not pick a pro-choice running mate. So Ridge is out.

The next round of clues comes from the arena of the political talk shows. Another favorite pick of reporters and Democrats is Nebraska Sen. Chuck Hagel, a McCain backer, Vietnam vet and self-made millionaire. Team Bush reportedly called him this week to get contact information for the coming days -- a sure sign he's on The List. But Hagel accepted an invitation to appear on a Sunday talk show, an egregious violation of the country-clubesque code of political etiquette required of Bush's potential doubles partners. Hagel is out.

New York Gov. George Pataki apparently has better political manners; he cancelled a Sunday morning booking late in the week. So he's in, right? Not so fast. The problem is, Pataki is pro-choice like Ridge, and Ridge has more going for him. But Pataki stays on The List as trade bait.

A few other names stay on The List simply because there's no fresh reason to strike them: former Cabinet Secretary Elizabeth Dole, Sen. Fred Thompson of Tennessee and Rep. John Kasich of Ohio. All are mega-dark horses, at least at this moment. But our patented Mock List formula dictates they stay on board for now.

Oklahoma Gov. Frank Keating is a definite Survivor. He's a neighbor, a bud and Dubya "preciates" his loyalty. The former prosecutor and FBI agent handled himself impressively after the Oklahoma City bombing in 1995. Part of the idea here is that picking him reinforces Bush's basic image the way Bill Clinton's selection of Al Gore did in 1992. The Bush people have asked him to stay in touch over the weekend, and he has declined all talk-show invitations.

Having said all that, there has been a flurry of chat lately that Keating's fellow governors don't like him much, that he's too unknown to have been pre-vetted by investigative reporters, that his sharp tongue makes him gaffe-prone and that he isn't a national figure. The last bit is certainly true. But he stays on The List. In fact, he may be the reluctant favorite at this point in the betting.

But the real favorite of the nanosecond is the man running the selection process for Bush – Dick Cheney. Rumor is that Cheney is Bush the Elder's pick. He's a national name and would lend the ticket senior-statesman and foreign-policy luster. He'd also ensure that, no matter who Gore picks, there would be no gravitas gap, at least on the vice-presidential level.

A senior Republican official, speaking on condition of anonymity, said Fiday Cheney had changed his voter registration from Texas to Wyoming to make him eligible to run with the two-term Texas governor. The source called Cheney the leading candidate and said Bush is "very, very close" to settling on Cheney, but stressed that no final decision has been made.

The downside is health. Cheney had heart trouble relatively early in his life and has undergone bypass surgery. He's also not exactly a charisma machine. But he's no longer just the Listmeister, he's also the name at the top of The List.

Finally, the rules of Mock Short Lists demand one name from left field. Today it's Tennessee Sen. Bill Frist. For no particular reason.

Just overheard: former Sen. John Danforth is back on The List, despite his Shermanesque no thanks a few months back. And, hey, what about Jeb Bush…