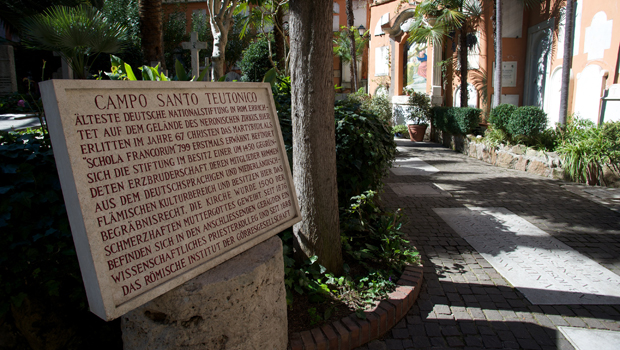 ROME -- Just steps from St. Peter's Basilica, the 1,200-year-old Teutonic Cemetery is the only cemetery inside Vatican walls and the final resting place of princes, cardinals, artists - and now one homeless man by the name of Willy Herteleer.

Herteleer was a familiar face around the Vatican. A Belgian of around 80 years of age, he sat in the same seat at 7 a.m. Mass every day for 25 years at the St. Anne church just inside the Vatican walls. He lived on the street, pushing his belongings around in a supermarket cart. The beggar was well known by the Swiss Guards who guard the Vatican gates and to the local shopkeepers and priests.

"He was a rich person, of great faith," the Rev. Bruno Silvestrini, the pastor of St. Anne, told Vatican Radio. "There were prelates who brought him food on certain days. Then, we no longer saw him, and subsequently we heard about his death."

On a cold December evening, Herteleer was overcome by the cold and collapsed. He was taken to a hospital and died Dec. 12. His unidentified body remained in a hospital morgue until friends tracked him down. He was buried in the Teutonic Cemetery Jan. 9.

"I've never seen so many people knocking on my door to ask when the funeral was, how they could help to keep his memory alive," Silvestrini said.

Vatican spokesman the Rev. Ciro Benedettini said he did not believe that Pope Francis knew about the burial before it happened. But, he said, "whether implicitly or explicitly, everything that happens inside the Vatican is because the pope wants it."

The Teutonic Cemetery - originally a plot of land where many Christians were martyred, given by the pope to Charlemagne in the 8th century for the burial of German pilgrims who died in Rome - is autonomous. No special permission is needed by the pope or the Vatican secretary of state to be buried there, but candidates must be Catholic pilgrims of German or Flemish origin.

No matter whether the pope was directly involved, Herteleer's burial inside Vatican walls is an indication of a changing Vatican and a reflection of the pope's concern for the poor and vulnerable. Earlier this month, at the pope's request, the Vatican installed showers and toilets for the homeless in St. Peter's Square.