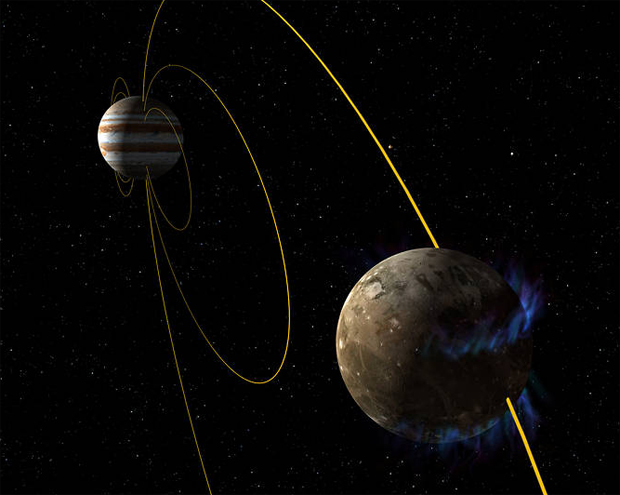 Larger than the planet Mercury, Ganymede is one of four moons discovered by Galileo in 1610, easily visible in small telescope and large binoculars. The subsurface ocean confirmed by Hubble is believed to be at least 60 miles thick, containing more water than all of Earth's ocean's combined.

As such, Ganymede joins a growing list of planets and moons in Earth's solar system, including Jupiter's moon Europa and Saturn's moon Enceladus, that are known to harbor vast reservoirs of liquid water.

The latest findings using the Hubble Space Telescope build on earlier observations by NASA's Galileo spacecraft that showed Ganymede has a magnetic field generated by an iron core and two bands of aurora that are created when electrically charged particles captured in the field crash into the moon's extremely thin oxygen atmosphere.

"If someone could be standing on Ganymede looking up into the night sky, it would appear as a red aurora to you, and it would be just visible even with the naked eye," said Joachim Saur, professor for geophysics at the University of Cologne in Germany.

Saur used Hubble to make extended observations of Ganymede's aurora to measure subtle shifts in latitude caused by the influence of Jupiter's much more powerful magnetosphere.

The lighthouse-like changes in Jupiter's magnetic field influence the auroral bands on Ganymede, causing them to rock up and down periodically.

"Without an ocean, the aurora changes by six degrees within five hours," Saur said. "However, when there is a salty and thus electrically conductive ocean present, this ocean counterbalances Jupiter's magnetic field influence and reduces the rocking of the aurora to only two degrees."

Looking at the aurora in ultraviolet light, Hubble was able to confirm that two-degree shift "exactly like predicted when there is an ocean present," Saur said. "So this confirms the existence of an ocean and simultaneously rules out the absence of an ocean."

Heidi Hammel, a veteran Hubble observer and a senior executive with the Association of Universities for Research in Astronomy, said Saur's observations represent "a really great example of using a remote sensing technique, using a telescope in orbit around the Earth, to study a moon that's in orbit around Jupiter and yet be able to make inferences about the interior of that moon just by looking at it from the outside."

She said future, more powerful telescopes may be able to use similar techniques to confirm the presence of oceans on planets orbiting other stars. But in the near term, closer to home, the Hubble findings add to steadily mounting evidence that water is abundant in Earth's solar system.

"This result today is (more) solid evidence of the strong presence of water, and we will be certainly continuing to study Ganymede and learning more about the environment there."