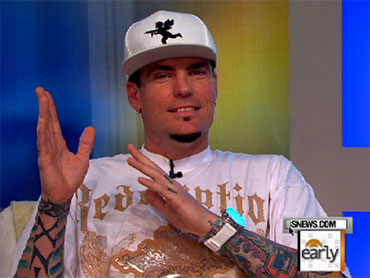 Twenty years ago this year, a then-unknown hip hop artist struck musical gold with a catchy tune and unconventional style. His name was Vanilla Ice, and the song was "Ice Ice Baby."

Maxim magazine Editor in Chief Joe Levy saysm, "Vanilla Ice was a phenomenon. He was blond and he had cheekbones and crazy sparkly jackets and an insane hairstyle."

"Ice Ice Baby" reached No. 1 on the Billboard charts and sold more than 40 million copies.

Levy said, "He was able to popularize the music that had been commercially successful, but came from a different place than a lot of pop music listeners around the country did."

But success proved short-lived, and his 1994 follow-up album, "Mind Blowin'," disappointed both fans and critics. Van Winkle fell out of the spotlight and into a life of drugs and alcohol, reports "Early Show" co-anchor Maggie Rodriguez.

Later that year, after bouts with depression and a failed suicide attempt, he vowed to turn his life around.

Vanilla Ice re-emerged in 1998 with a new album and a lighter outlook, thanks in large part to his starring role on season two of VH1's "Surreal Life."

He said, "When things are all are bad and hitting you at once, the sun comes back out."

Today, the married father of two has turned a hobby into a new show, "The Vanilla Ice Project," for the DIY Network, and he plans to release a new album later this year.

To see the Rodriguez interview of Vanilla Ice, click in the video below: