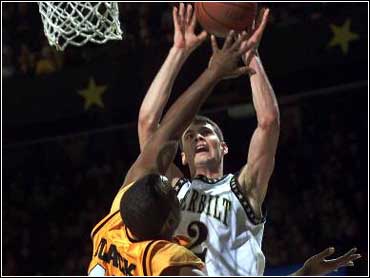 "Coach had been telling me in order for us to be successful, I had to get down in the paint and start scoring more," Williams said after leading the Commodores to an 85-72 victory over No. 5 Tennessee on Saturday night.

Williams had a career-high 22 points and added 12 rebounds as the Commodores (17-6, 7-5 Southeastern Conference) won the season series from their cross-state rivals for the first time in six seasons.

"Anthony Williams was great for every minute he was out there," Stallings said.

The Commodores shot 53 percent from the floor and took excellent care of the ball, committing only seven turnovers. As a result they did not need another monster night from SEC scoring leader Dan Langhi, who had 31 in the first meeting in Knoxville but settled for 17 Saturday, including a breakaway slam at the buzzer that sent the Vandy students onto the floor to celebrate.

"I thought our team played the best game we've played this season," Stallings said. "Tennessee is the best team in the league. I think they've shown that this season."

Tennessee coach Jerry Green gave the credit to the Commodores, who dogged is team into an especially poor shooting night.

"I thought Vanderbilt played as well as I've seen them play," Green said. "Thirty-nine percent (Tennessee's field goal percentage) was one of the cruxes, but I think Vanderbilt had something to do with that."

Tennessee also got a terrible performance from leading scorer Tony Harris (15.3 points per game), who was 1-of-14 from th field and finished with three points to go with one assist and three turnovers. He was 0-8 on 3-point attempts.

Vincent Yarbrough led the Vols with 25 points. Ron Slay had 13 and Terrence Woods added 10, all in the first half.

Tennessee came into the game as the league's best road team at 7-1.

The Vols had won three straight and seven of their last eight, but had no answer for Williams. The 6-foot-7 junior, primarily an inside player, got off to an auspicious start when he banked in an 18-footer on his first shot.

The game was tied 29-all late in the first half before Vanderbilt closed the half with a 12-4 spurt to lead 41-33 at the break.

Tennessee cut it to five points on a three-point play by Yarbrough with just under 13 minutes to go.

Vanderbilt stretched its lead to 14 on a 3-pointer by Sam Howard, who had 11 points. Yarbrough answered with a 3, Howard hit another and Yarbrough answered again, all in the space of less than a minute, and the Commodores were up 65-54.

From there it was all Vanderbilt. Langhi's 3-pointer edged the margin back up to 14 and the Vols got no closer than eight the rest of the way.