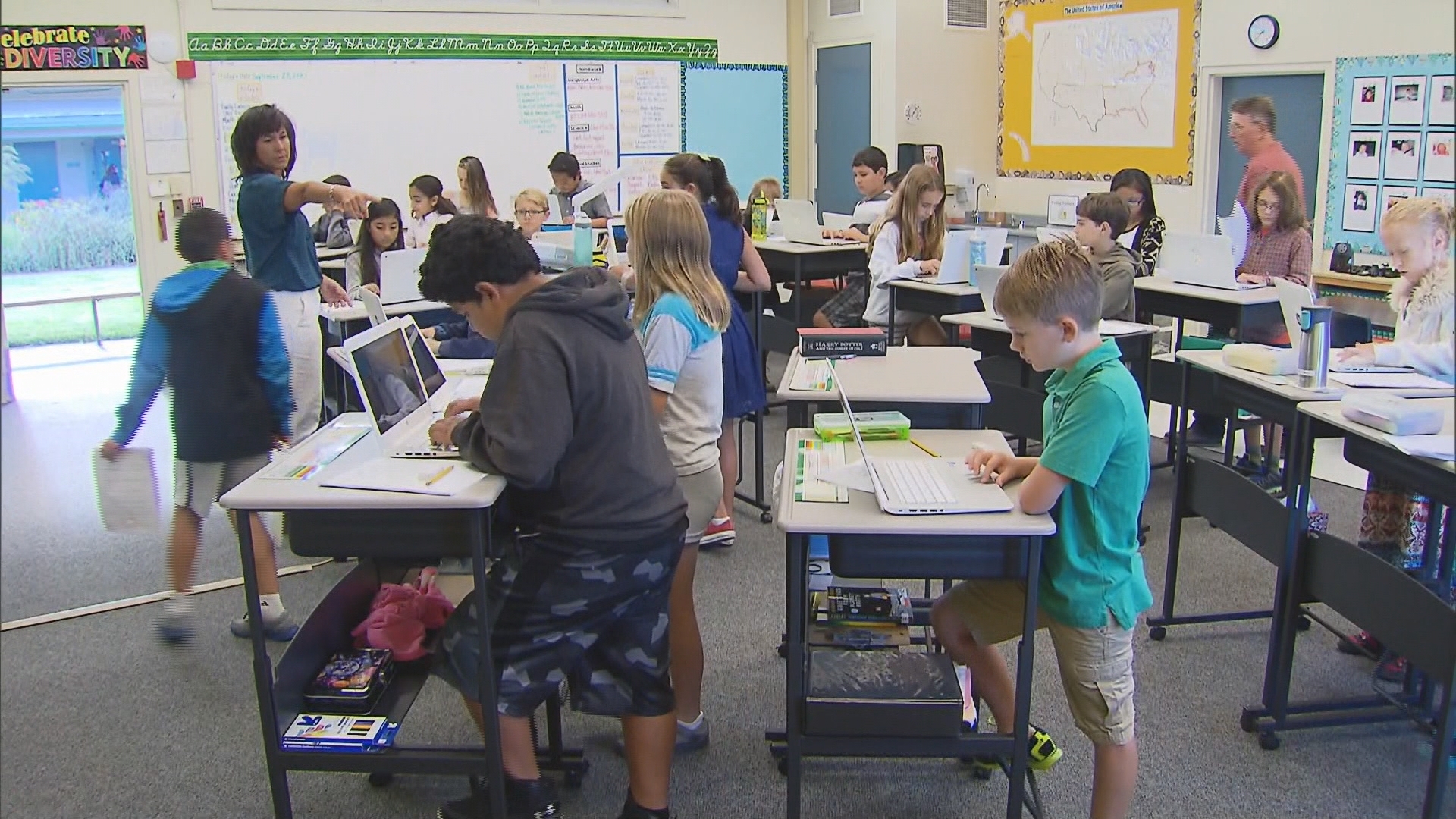 Companies across the country are ditching traditional workspaces and "raising" employees' desks with standing desks. They're so popular the White House wants $700,000 to buy them for presidential staff.

Now, the trend is moving from the office to the classroom, reports CBS News correspondent Mireya Villarreal.

Vallecito Elementary School in San Rafael, California will soon be the first in the country to have standing desks everywhere.

"It gets your legs working so you're not like, 'oh I can't move' cause you get stiff," said student Kaia Whitehouse.

The students' favorite feature is the aptly-named "Fidget Bar."

"It burns off a lot of my energy so I can concentrate without wiggling in the chairs," said student Meadow McPherson.

Nineteen out of Vallecito's 22 classrooms have standing desks. The last three will be converted by the end of the year. Stools for the desks are available in the classroom if students get tired, although teachers say they usually go unused.

"I do give them a chance to sit, " teacher Maureen Zink said. "They move around and they do sit, but for the most part they are standing up."

"I'm so excited for them and I'm thrilled that we found a way to make them more excited about school," said Principal Tracy Smith.

While the students were initially tired from standing all day, Smith said within a few months, they were more focused, confident and productive. Teachers also took some time to grow adjusted to the movement in the classroom, but Smith said she believes her staff understands the purpose and is "100 percent behind it."

Studies show allowing kids to move during the day can improve grades - up to 15 percent - and help kids burn up to 25 percent more calories.

Dr. Steven Mittelman, the director of the Diabetes & Obesity Program at Children's Hospital Los Angeles, says there isn't data on the long-term effects of kids using standing desks, but the physical benefits are immediate.

"You increase your muscle tone in your legs, there seems to be an improvement in actually circulation and arterial function, and of course expending a few calories extra every hour can lead to big changes," he said.

But those big changes can come with a big price tag, costing up to $6,000 to convert a single classroom. That's why some schools are experimenting with other alternatives - like yoga balls to increase core stability, exercise bikes for "read-and-bike" programs, or bands - to keep kids active.

"We definitely have our work cut out for us in terms of getting donations and funding for this," said Juliet Starrett, who started the program at Vallecito. But she said she won't let cost get in the way of her movement and hopes to get every kid in public school standing in 10 years.

Starrett started "StandUpKids," an organization with corporate and individual donors to raise money. Her goal is to earn a one-million-dollar fund that would help teachers who apply for grant money to transform their classrooms.

"That's my ultimate goal though, is to have the federal government take notice so at least, at a minimum, so at least when a new school is built, it's just a given that standing desks are going to be norm," said Starrett.

While it may take time to catch on around the country, the kids at Vallecito are proud to be taking a stand.

"Sitting for too long is the new smoking," said Whitehouse.

Editor's Note: This story has been updated with details on the stools students can use if they get tired.