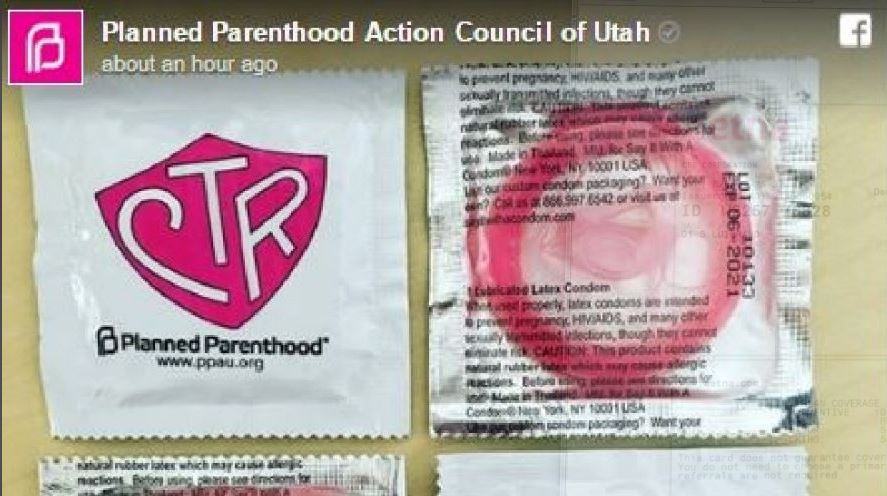 SALT LAKE CITY -- Utah's Planned Parenthood branch won't hand out condom packages printed with a symbol associated with Mormon youth teachings after an image of the wrappers on its Facebook page generated backlash.

But an image of the prophylactics posted on their Facebook page generated controversy among people who disapproved of using a shield logo very similar to popular rings worn by Mormon children and teenagers.

Known as CTR rings, they often serve as a reminder to make moral decisions in line with Church of Jesus Christ of Latter-day Saints values, which includes a prohibition against sex outside marriage.

The church owns the rights to the phrase and the shield design, and did not give Planned Parenthood permission to use it, LDS spokeswoman Kristen Howey said. She declined to say whether a lawsuit is under consideration.

If Mormon officials decide to file a lawsuit they could have a reasonably good case, said trademark lawyer Randall Bateman. Any claim would likely depend on showing that someone who saw the condoms could think they were connected with or endorsed by the church.

The condoms were created to be given out at symposium for Sunstone Magazine, a foundation that encourages open discussion about Mormon thought and experience. After the backlash, Planned Parenthood of Utah decided not to hand them out so they wouldn't be a distraction, Barker said.

"Our intent was never to offend, but to use the idea of 'choosing the right' to spark open, honest conversations about sexual health and contraception," she said in a statement.

Barker told CBS affiliate KUTV that they never intended to offend anyone when they made the decision to create the packaging and hand them out at the symposium.

"We felt like this was an audience that would appreciate it," she said.

The phrase has its roots in a church hymn that was written in the early 1900s, when morality and self-discipline were becoming hallmarks of the faith, said Mormon scholar Matthew Bowman.

The rings with the shield design were created around 1970, as a counter to the national sexual revolution that came along with the advent of low-cost, easily available birth control, he said.

Today, the church encourages married couples to have children but says specific birth control decisions are between a husband and wife. While the church is against elective abortions, there are some circumstances where it can be permissible.

The dust-up comes after a federal appeals court sided with Planned Parenthood in a lawsuit over Utah Gov. Gary Herbert's move to defund the group.

The court ruled it was a political decision that likely violated Planned Parenthood's rights and ordered the state to keep the money flowing.