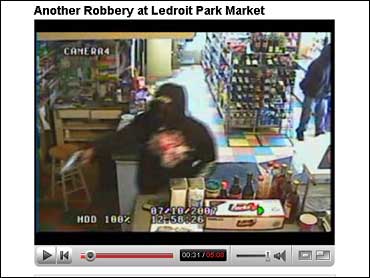 Residents of a Washington neighborhood that's been plagued by crime have found a unique way to draw attention to their plight.

A customer of a LeDroit Park store that was robbed last month posted the surveillance video of the crime on YouTube.

The video shows one person cleaning out the cash register and the other holding the clerk against the floor at gunpoint. The clerk is pistol-whipped and kicked.

Then there's a plea to city officials.

"I want the mayor, council member and the police chief to see this video," Simon Mahteme, owner of LeDroit Park Market, tells the camera. "I'm tired of it. It's not human behavior. I'm trying to make an honest living."

The July 10 afternoon crime was the tenth at the store since October, reports the Washington Post.

A 17-year-old has been charged in the crime. Chief Cathy Lanier won't say whether the video played a role, but she did say she's seen it and Mayor Adrian Fenty says he's heard of it.

"If this is one way that more people will see a potential suspect that will identify him, then I think it has some redeeming value," Fenty told the Post.

LeDroit Park residents have also raised $4,500 to buy a video camera for the building's exterior, and residents and police are working together to connect it to the city's network of crime cameras.