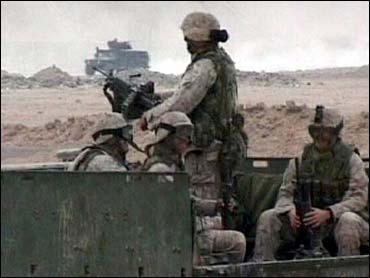 U.S. warplanes pounded Fallujah late Friday in what residents called the strongest attacks in weeks as more than 10,000 American soldiers and Marines massed for an expected assault. Iraq's prime minister warned the "window is closing" to avert an offensive.

Residents reached by telephone said the aircraft were striking targets in the central city market that had not been hit since April. There was no confirmation from U.S. officials.

Earlier Friday, U.S. planes dropped leaflets urging women and children to leave the city, residents said. No one knows how many of the rebels have already escaped taking their weapons, and their fight, to other cities in Iraq, reports CBS News Correspondent Elizabeth Palmer,

who is in Fallujah with the Marines
.

Night after night, U.S. warplanes and heavy artillery have pounded suspected insurgent positions. Planners believes this softening up, added to weeks of meticulous preparation and intelligence gathering, will at last bring the city firmly under coalition control, Palmer reports.

As pressure mounted on the guerrilla stronghold, the insurgents struck back, killing one U.S. soldier and wounding five in a rocket attack. Clashes were reported at other checkpoints around the city and in the east and north of Fallujah late in the day.

For the past three nights, long convoys of American soldiers from Baghdad and Baqouba have rolled onto a dust-blown base on the outskirts of Fallujah, a city that has become the symbol of Iraqi resistance. U.S. commanders here have been coordinating plans either to fight their way into the city or isolate it from the rest of Iraq's Sunni Muslim heartland.

If they fight, American troops will face an estimated 3,000 insurgents dug in behind defenses and booby traps. Military planners believe there are about 1,200 hardcore insurgents in Fallujah — at least half of them Iraqis. They are bolstered by insurgent cells with up to 2,000 fighters in the surrounding towns and countryside.

pivotal moment in the war
for Iraq, report National Security Correspondent David Martin. However many days it takes, no one doubts U.S. troops can retake the city and eliminate what has become a major terrorist stronghold. But not even a gung ho marine believes that alone will end the insurgency.

"Just by taking it out does not mean the rest of the insurgency will fall, but it will be a big chip in that block," Major Jim West, a Marine intelligence officer, told Martin.