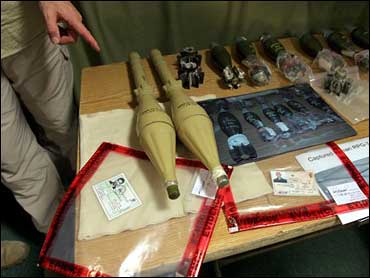 This story was written for CBSNews.com by CBS News correspondent Cami McCormick, who can be heard frequently on CBS Radio.


After warning that the threat of deadly EFPs, or Explosively Formed Penetrators, was growing at an alarming rate, the U.S. military now says there's been a "dramatic" decrease in the use of the powerful roadside bombs.

EFPs "can punch through most of the armor out on the battlefield today," Army Lt. Col. Christopher Garver, a U.S. military spokesman said of the devices, which U.S. officials have said come from Iran.

They are blamed for more than 170 American deaths since 2004, when they first appeared on the battlefield. More than 600 American troops have been wounded by the bombs. EFPs account for a small percentage of the roadside bombs in Iraq, but they are responsible for a disproportionately high number of casualties.

The reported decrease came as the U.S. military offered to reporters what it said was proof that weapons like EFPs were being manufactured in Iran. The Iranian government has denied any involvement in providing weapons or material support to Iraq's insurgency.

According to Garver, the reasons for the marked drop in EFP incidents could include the detention of three Iranians in Baghdad in December. One of the men was believed to be a high-level Operations Officer with the Quds Force of Iran's elite Revolutionary Guard.

Garver says the men were suspected of involvement with weapons smuggling.

Most EFP attacks have occurred in Baghdad, and another reason for their decrease may be the ramped-up presence of U.S. and Iraqi troops in the capital due to the ongoing security crackdown.

The city is surrounded by checkpoints, the most critical of which are to the south, according to American military commanders who believe most weapons find their way into Baghdad from that direction.

The next brigade of U.S. troops arriving in Iraq as part of President Bush's troop surge will head south of Baghdad to help choke off those smuggling routes.

"We have to control what we call the belts, to the north, west and south. We're going to have troops in each of those areas, the south being a priority for the next group of troops coming in, to prevent weapons from coming back in once we've cleared them all out of Baghdad," Garver said.