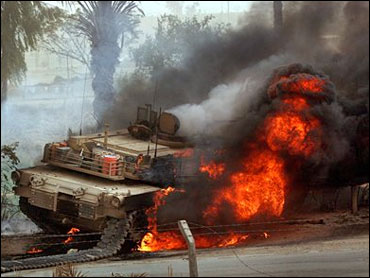 U.S. military officials charged on Sunday that the highest levels of the Iranian leadership ordered Shiite militants in Iraq to be armed with sophisticated armor-piercing roadside bombs that have killed more than 170 American forces.

The military command in Baghdad denied, however, that any newly-smuggled Iranian weapons were behind the five U.S. military helicopter crashes since Jan. 20 — four that were shot out of the sky by insurgent gunfire.

A fifth chopper crash has tentatively been blamed on mechanical failure. In the same period, two private security company helicopters also have crashed but the cause was unclear.

The deadly and highly sophisticated weapons the U.S. military said were coming into Iraq from Iran are known as "explosively formed penetrators," or EFPs.

The Iraqi government not only knows but has asked the Iranian government to stop.

The presentation of evidence was the result of weeks of preparation and revisions as U.S. officials put together a package of material to support the Bush administration's claims of Iranian intercession on behalf of militant Iraqis fighting American forces.

Senior U.S. military officials in Baghdad said the display of evidence was prompted by the military's concern for "force protection," which, they said, was guaranteed under the United Nations resolution that authorizes American soldiers to be in Iraq.

Three senior military officials who explained the evidence said the "machining process" used in the construction of the deadly bombs had been traced back to Iran.

The experts, who spoke to a large gathering of reporters on condition that they not be further identified, said the supply trail began with Iran's Revolutionary Guards Quds Force, which also is accused of arming the Hezbollah guerrilla army in Lebanon. The officials said the EFP weapon was first tested there.

The so-called Iran dossier, a small portion of which was revealed in Baghdad on Sunday, was revised heavily after officials decided it was not ready for release as planned last month. U.S. military officials in Baghdad had even scheduled a briefing for reporters only to cancel it a day later.

Senior U.S. officials in Washington — gun-shy after the drubbing the administration took for the faulty intelligence leading to the 2003 Iraq invasion — had held back because they were unhappy with the original presentation.

The display of evidence appeared to be part of the White House drive that has empowered U.S. forces in Iraq to use all means to curb Iranian influence in the country, including killing Iranian agents.

It included a Powerpoint slide presentation and a handful of mortar shells and rocket-propelled grenades which the military officials said were made in Iran.

The centerpiece of the evidentiary display, however, was a gray metal pipe about 10 inches long and 6 inches in diameter, the exterior casing of what the military said was an EFP, the roadside bomb that shoots out fist-sized wads of nearly-molten copper that can penetrate the armor on an Abrams tank.

The U.S. officials said there was no evidence of Iranian made EFPs having fallen into the hands of Sunni insurgents who operate mainly in Anbar province in the west of Iraq, Baghdad and regions surrounding the capital.

"We know more than we can show," said one of the senior officials, when pressed for more evidence that the EFPs were made in Iran.

An intelligence analyst in the group said Iran was working through "multiple surrogates" — mainly in the Mahdi Army — to smuggle the EFPs into Iraq. He said most of the components are entering the country at crossing points near Amarah, the Iranian border city of Meran and the Basra area of southern Iraq.

Last week, U.S. officials said they were investigating allegations that Shiite lawmaker Jamal Jaafar Mohammed was a main conduit for Iranian weapons entering the country. Mohammed has believed to have fled to Iran.

U.S. officials have alleged for years that weapons were entering the country from Iran but had until Sunday stopped short of alleging involvement by top Iranian leaders.

During the briefing, a senior defense official said that one of the six Iranians detained in January in the northern city of Irbil was the operational commander of the Quds Force.

He was identified as Mohsin Chizari, who was apprehended after slipping back into Iraq after a 10-month absence, the officer said.

The Iranians were caught trying to flush documents down the toilet, he said. They had also tried to change their appearance by shaving their heads. Bags of their hair were found during the raid, he said.

The dates of manufacture on weapons found so far indicate they were made after the fall of Saddam Hussein — mostly in 2006, the officials said.

In a separate briefing, Maj. Gen. Jim Simmons, deputy commander of Multinational Corps-Iraq, said that since December 2004, U.S. helicopter pilots have been shot at on average about 100 times a month and been hit on an average of 17 times in the same period.

He disclosed a previously-unknown shootdown, a Blackhawk helicopter hit by small arms fire near the western city of Hit. The craft crash-landed but there were no casualties. Simmons was on board.

The major general said Iraqi militants are known to have SA-7, SA-14 and SA-16 shoulder-fired anti-aircraft missiles but none of the most recent five military crashes were caused by those weapons. He said some previous crashes had been a result of such missiles but would not elaborate.

As road travel has become unacceptably dangerous in Iraq, U.S. forces increasingly have turned to helicopters for transportation of troops and supplies. Simmons said U.S. helicopters were in the air for 240,000 hours in 2005 and he estimated the total figure this year would reach 400,000 hours.

At least 129 killed after riot erupts at Indonesia soccer match