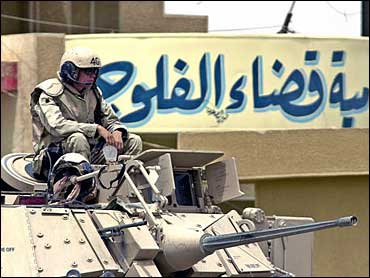 Two Iraqis stepped from their car and opened fire early Tuesday, killing two Americans and wounding nine in a city whose people have made clear that U.S. troops are not welcome.

The violence in Fallujah, a hotbed of support for Saddam Hussein, was the latest in three deadly days for the U.S. military in postwar Iraq — further evidence the country remains a perilous place for its American occupiers.

Eight American soldiers have died in Iraq since Sunday — in direct attacks, accidents and explosions. Nearly two dozen have been injured. Hours after the attack in Fallujah, two American military police officers were wounded in rocket-propelled grenade assaults on a Baghdad police station.

"You've always got to be worried," said Sgt. Ariel Saez, 28, a soldier with the 1st Armored Division manning a Baghdad checkpoint. "You hear the gunshots constantly at night. It makes you wonder if it's one of us being put down. We always worry about it."