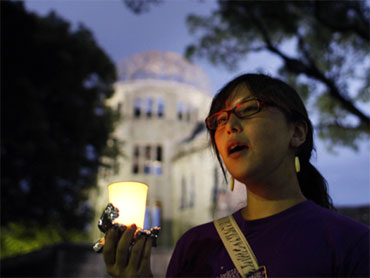 The site of the world's first atomic attack swarmed with tens of thousands of people Thursday as Hiroshima prepared for a memorial that will for the first time have representatives from the United States and other major nuclear powers.

Washington's decision to attend the 65th anniversary event on Friday has been welcomed by Japan's government, but has generated complex feelings among some Japanese who see the bombing as unjustified and want the United States to apologize.

"Americans think that the bombing was reasonable because it speeded up the end of the war. They try to see it in a positive way," Naomi Sawa, a 69-year-old former teacher, said after paying her respects to the dead. "But we were devastated."

About 140,000 people were killed or died within months when an American B-29 bombed Hiroshima on Aug. 6, 1945. Three days later, about 80,000 people died after the United States attacked Nagasaki.

Concerns that attending the ceremony - an emotional event beginning with the offering of water to the dead and the ringing of a bell to soothe their souls - would reopen old wounds had until this year kept the U.S. away.

Former President Jimmy Carter visited Hiroshima's Peace Museum in 1984, after he was out of office. The highest-ranking American to visit while in office is House Speaker Nancy Pelosi, who went in 2008.

Neither went for the annual memorial.

But to gain wider attendance, Hiroshima has taken great pains to ensure that the memorial will be a forward-looking event, a key to getting Washington to participate. Japanese officials said it is important to use the anniversary as a chance to push nuclear disarmament, not revisit history.

That message appears to have resonated.

Friday's memorial is to be the largest gathering yet, with representatives from 75 countries and United Nations Secretary-General Ban Ki-moon. John Roos, the ambassador to Japan, will represent the U.S.

French and British dignitaries were to join for the first time as well.

The presence of the U.S. has been hailed by officials in Hiroshima and Tokyo as a breakthrough and a sign of President Barack Obama's desire to push ahead with his ambitious goal of creating a world without nuclear weapons.

"We believe the attendance of the nuclear powers will bolster a global desire to abolish nuclear weapons," Hiroshima Mayor Tadatoshi Akiba said in a statement.

Ban, who visited Nagasaki on Thursday before arriving in Hiroshima, said this year's memorial will send a strong signal to the world that nuclear weapons must be destroyed.

"The only way to ensure that such weapons will never again be used is to eliminate them all," he said. "There must be no place in our world for such indiscriminate weapons."

Hiroshima has invited Obama to visit the city, and he has expressed interest in doing so at some point while he is in office.

But such a visit would be highly controversial.

At Hiroshima's Peace Memorial Park, some visitors expressed concerns that Japan's view of the bombing - seen by many as excessive use of deadly force - still remains at odds with America's.

Katsuko Nishibe, a 61-year-old peace activist, said she welcomed the decision to send Roos, but added that she thought it was dangerous to think that the bombing of Hiroshima was justified.

"I don't think it was necessary," she said. "We have a very different interpretation of history. But we can disagree about history and still agree that peace is what is important. That is the real lesson of Hiroshima."

Jerry Wohlgemuth, a 23-year-old college student from Great Meadows, New Jersey, said he supported the decision to send a representative from the U.S.

"It shows how much progress we've made as a country," he said.

But he said he thought the bombing was unavoidable.

"Just imagining sending Marines to Japan's mainland and having to take Tokyo - millions would have died. It might not have even been possible. World War II was total war."