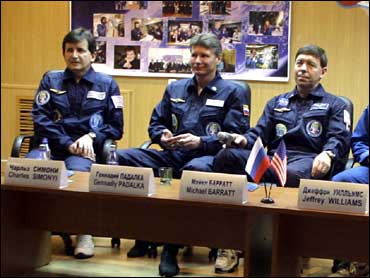 The Russian rocket lifted off on schedule from the Baikonur cosmodrome facility in a roar of fire and soared into the cold, overcast skies over northern Kazakhstan's barren steppes.

Simonyi, a software designer paying $35 million for his second trip on the Soyuz, joined Russian cosmonaut Gennady Padalka and American astronaut Michael Barratt in the cramped capsule, where they will sit for nearly two days before hooking up with the station, orbiting some 220 miles above the Earth.

Minutes after blast-off, TV cameras from inside the Soyuz showed Padalka and Barratt waving for the camera and giving the thumbs-up OK sign.

At viewing stands a few hundred yards away, scores of officials, reporters and relatives watched the launch, including Simonyi's 28-year-old Swedish socialite wife Lisa Persdotter, who wept and clutched at the coat of a relative.

Also watching was Paul Allen, a co-founder of software giant Microsoft Corp., where Simonyi worked for many years.

"It's fantastic to see a launch, but when it's one of your friends, it's just something so special," he said.

Asked if he would be interested in going to space sometime, Allen said he would consider it; not on the Russian capsules or U.S. shuttles, but on one of his own crafts. In 2004, Allen used his Microsoft fortunes to bankroll SpaceShipOne, which in 2004 became the first private, manned craft to reach space.

While Barratt and Padalka will join the current station's permanent crew, Simonyi will return to Earth 13 days later - a trip that will make him the first two-time space tourist and, for the foreseeable future, the last.