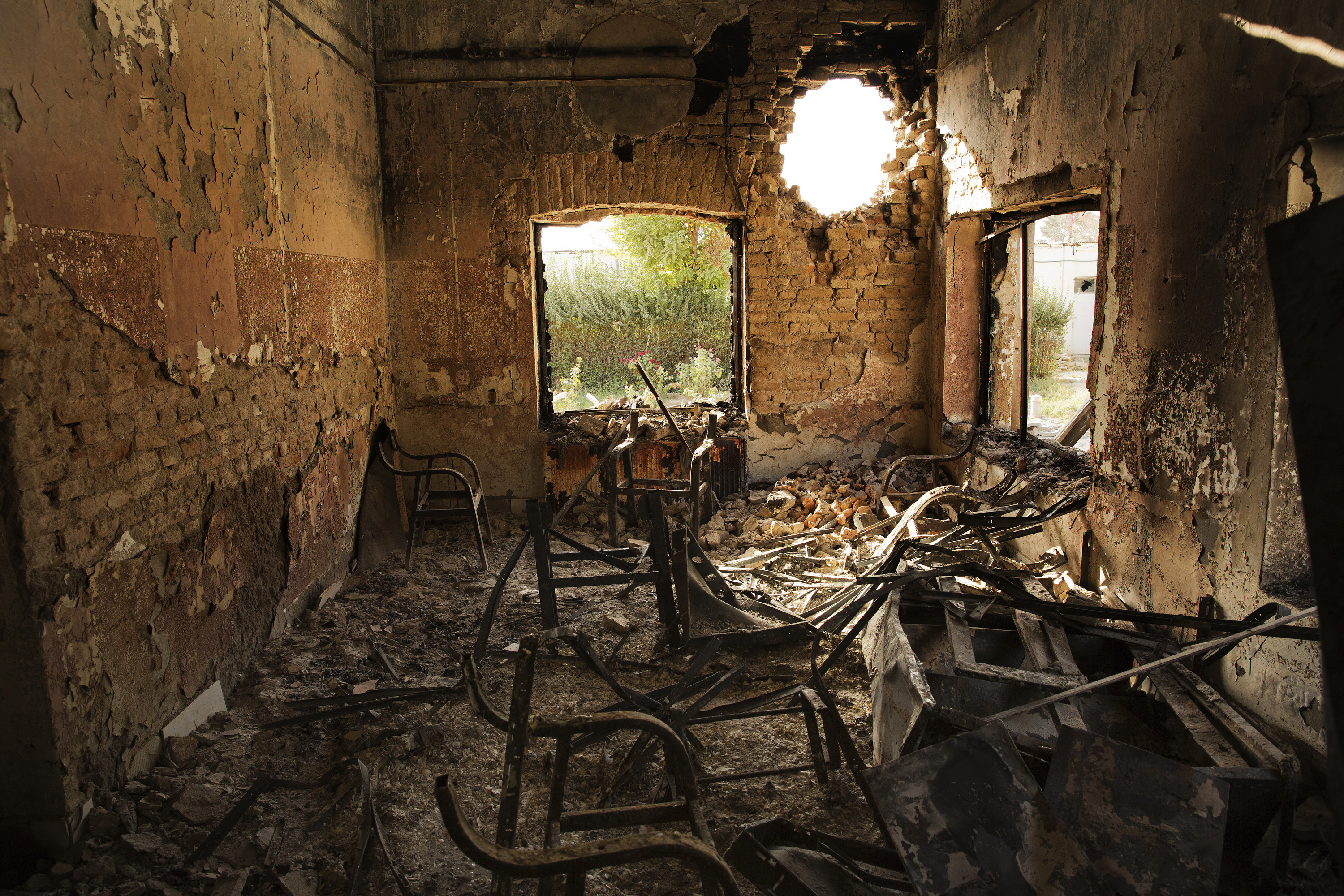 WASHINGTON - American soldiers and airmen who killed and wounded dozens of civilians in a strike on an Afghanistan hospital violated the rules of engagement and have been suspended as they await disciplinary action, U.S. military officials said Wednesday.

Briefing reporters on the results of two investigations, Gen. John Campbell, the U.S. commander in Afghanistan, described an egregious series of human and technical failures that led a U.S. warplane to mistakenly destroy a medical charity's hospital in northern Afghanistan last month. But Campbell and other officials would not say how many people had been removed from their jobs or whether those high up the chain of command will be subject to discipline.

Officials said the crew of an AC-130 gunship had been dispatched to hit a Taliban command center in a different building, 450 yards away. However, hampered by problems with their targeting sensors, the crew relied on a physical description that led them to begin firing at a hospital run by the Doctors Without Borders medical charity, even though they saw no hostile activity there.

Many chances to avert the error were missed, officials said.

"We made a terrible mistake that resulted in unnecessary deaths," Brig. Gen. Wilson Shoffner said.

Campbell and Shoffner said that neither the special forces commander who called in the strike at the request of Afghan forces, nor the air crew, was aware that a hospital was being hit until it was too late. They did not address claims by Afghan officials that the hospital had been overrun by the Taliban, but a summary of one of the investigations, obtained by The Associated Press, says there is no evidence to support that. It also says there was no hostile activity observed at the hospital.

The plane fired 211 shells at the compound over 25 minutes before commanders realized the mistake and ordered a halt, according to the summary. Doctors Without Borders contacted coalition military personnel during the attack to say its facility was "being 'bombed' from the air," and the word finally was relayed to the AC-130 crew, the report said.

The report says the Oct. 3 attack in the city of Kunduz killed at least 31 civilians and injured 28 others. Investigators determined that additional civilians probably were killed or injured.

The summary is of the investigation known officially as a combined civilian casualty assessment, which was led by U.S. Army Brig. Gen. Richard Kim and made up of representatives of NATO and the Afghan government. It was charged with determining facts but not to assign blame.

A parallel U.S. military investigation was done to look further at the case and to determine accountability. Campbell discussed those findings but did not release any documents. The full report is about 3,000 pages, officials said.

The Kim investigation report said that on Oct. 2, hours before the attack, Afghan special forces members advised the U.S. Special Forces commander in Kunduz that an Afghan ground assault force would raid a National Directorate of Security compound in Kunduz that night. The directorate is Afghanistan's national intelligence agency.

The Afghans identified the intelligence agency compound as a Taliban insurgent command and control site, the report said. The AC-130 aircrew, however, for a variety of reasons thought the Afghans were referring to the compound that turned out to be the hospital. The coordinates for the target were passed on to the aircrew by an American terminal attack controller, including a reference to the target as also being a prison.

"However, the aircrew was unable to identify the objective when the grid reference was programmed into the AC-130's fire control system," the report said. "This led the aircrew to rely heavily on the physical description subsequently provided" by the Afghans to the American air controller to identify the target compound.

"Other contributing factors to the misidentification of the MSF compound include that the maps used by the (U.S. Special Forces commander) did not label the MSF compound as containing a medical facility, and that the MSF medical facility was not marked so as to distinguish it as a protected medical establishment," the report said, describing Doctors Without Borders by its French initials, MSF.

Doctors Without Borders said in its own report earlier this month that several doctors and nurses were killed immediately, and patients who could not move burned to death in the ensuing fire. Hospital staff members made 18 attempts to call or text U.S. and Afghan authorities, the group said.

People fleeing the main building were cut down by gunfire that appeared to track their movements, while a patient trying to escape in a wheelchair was killed by shrapnel, the group's report said.

A copy of the casualty assessment report was obtained by The Associated Press on Wednesday. It has not been released.

It said investigators found no evidence that the Americans involved knew they were attacking a hospital. It said they found no evidence that key commanders, including the Afghans and the AC-130 gunship crew, had access to a "no strike" list of targets that were off-limits to attack. Under U.S. rules of engagement, no hospital or similar facility is a valid target.

It is unclear whether the U.S. Special Forces commander on the ground, who authorized the air assault, had the map grid coordinates for the hospital available to him when he authorized the attack, the report said. The medical charity had provided GPS coordinates for its medical facilities in Kunduz to U.S. military authorities in Kabul and to Afghan government officials on Sept. 29.

"This mission critical information was not received by the AC-130 aircrew" or the Afghan commanders, the report said.

"The misidentification of the MSF compound and its subsequent engagement resulted from a series of human errors, compounded by failures of process and procedure, and malfunctions of technical equipment which restricted the situational awareness" of the U.S. forces involved, the report concluded.

President Barack Obama has apologized for the attack, one of the worst cases of civilian casualties in the 14-year history of the U.S war effort.