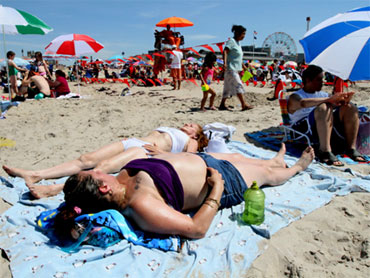 A computer model that can predict the impact of a tsunami from the San Francisco Bay area to Alaska is helping U.S. scientists plot danger zones in coastal cities to guide emergency planning.

The model is being combined with maps to show the detailed effects on the narrow inlets and bays sandwiched between the high cliffs and mountains that make up much of the United States' West Coast.

"We create simulations that show how waves are propagating, and how they would affect the coast, and we do it community by community," said Arun Chawla, an environmental engineer at the OGI School of Science & Engineering, part of the Oregon Health & Science University.

The information could give emergency workers a better idea of where to place vital equipment or facilities, such as fire stations.

The work was under way before an undersea earthquake off the coast of Indonesia generated a tsunami that swept through heavily populated areas of southeast Asia on Dec. 26, killing an estimated 150,000 people.

Fifty miles off the West Coast, a 680-mile undersea fault known as the Cascadia subduction zone behaves much like one that ruptured off Sumatra. A 9.0 earthquake in 1700, which left evidence of flooding in the Puget Sound area, was along the Cascadia fault.

A West Coast quake near the center of that zone could devastate an area from Northern California to Canada's British Columbia, said James Reddy, community education coordinator for the Oregon Department of Geology and Mineral Industries, which also is working on the project.

"The good news for Oregon and the Pacific Northwest is that we are much better prepared than the countries around the Indian Ocean to respond to an event like this," Reddy said.

Still, George Priest, a coastal geologist with DOGAMI, said a West Coast quake about 50 to 75 miles offshore would give some areas of the Oregon coast only 10 minutes' warning.

The United States has a deep-sea tsunami warning system. But the network, which consists of six deep-sea instruments in Alaska, Washington, Oregon and Hawaii and near the equator off the coast of Peru, is thin and scattered, and at least two of the gauges in Alaska are not even reporting daily wave readings.