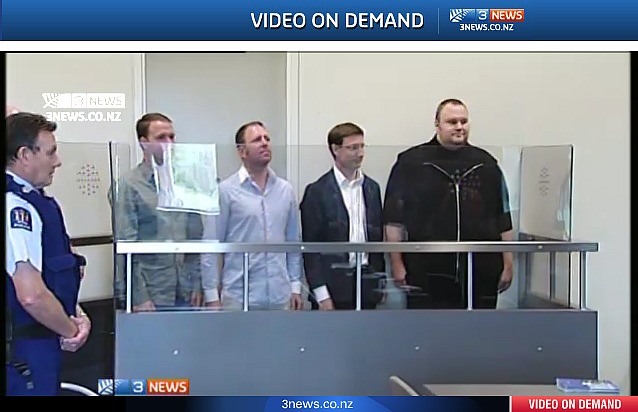 Kim DotCom and MegaUpload helped fill out the cyberlocker's video library in 2006 by snatching videos from the then-fledgling YouTube, the U.S. government alleges.

The U.S. Justice Department is trying to extradite DotCom and three other MegaUpload managers from New Zealand and have accused them of piracy, money laundering and racketeering.

Buried in the Jan. 5 indictment against MegaUpload, DotCom and six other employees of the cyberlocker service, are e-mail communications between two managers, Mathias Ortmann and Bram van der Kolk, from April 2006.

"Do we have a server available to continue downloading of the Youtube's vids?" van der Kolk wrote Ortmann according to the indictment. "Kim just mentioned again that this has really priority."

"Hope YouTube is not implementing a fraud detection system now...praying," Ortmann responded. A while later, van der Kolk wrote back that he didn't see how some of YouTube's unpopular videos could help "jump start" MegaUpload.

"Well we only have 30 percent of their videos yet," Ortmann wrote. "In my opinion it's nice to have everything so we can decide and brainstorm later how we're going to benefit from it."

Ira Rothken, MegaUpload's attorney, was not immediately available for comment. He has said that his clients are innocent and that the government's case is "flimsy."

Some things to keep in mind are that MegaUpload's officers haven't been heard from yet and a spokeswoman for YouTube, which was acquired by Google in October of 2006, declined to comment about whether YouTube was aware of any scraping by MegaUpload. She said, however, the kind of cut-and-pasting referred to in the e-mails couldn't happen today.

"Downloading YouTube videos is against our policies," said the spokeswoman. "We have mechanisms in place to prevent illegal downloads."

If the e-mails included in the indictment are accurate, the conversation between Ortmann and van der Kolk, as well as others, cast doubt on the notion that MegaUpload's operators were just a group of guys trying to give consumers a break and to secure freedom of information.

They were supposed to be idealists, not capitalists.

So, if file-sharing enthusiasts condemned Hollywood and the music industry for turning art into commerce, what was DotCom and MegaUpload doing? The e-mails make it harder and harder to wrap DotCom up with The Pirate Bay founders.

When police raided DotCom's home on January 19, they found him living in a leased $24 million mansion. He owned a vintage pink Cadillac, numerous Mercedes Benz, and other exotic automobiles. They found him in possession of millions of dollars that the government says he made from enabling people to store and access pirated movies, TV shows and other media.

U.S. investigators say DotCom made $42 million off of MegaUpload in 2010.

When you hear people from the Electronic Frontier Foundation and other Internet advocacy groups talk about the ethos of the Web and respecting free speech, do they also mean that it's okay to lift content in a wholesale fashion from competitors? In a subsequent e-mail conversation between Ortmann and van der Kolk, the latter man wrote: "Kim really wants to copy Youtube one to one."

U.S. officials also say DotCom tried to smear his competitors, accusing them of some of the same practices that DotCom is now accused of. From the indictment:

"Our legal team in the US is currently preparing to sue some of our competitors and expose their criminal activity," DotCom wrote a PayPal representative in October 2011. "We like to give you a heads up and advise you not to work with sites that are known to pay uploaders for pirated content. They are damaging the image and the existence of the file hosting industry (see whats happening with the ProtectIP act). Look at Fileserve.com, Videobb.com, Filesonic.com, Wupload.com,Uploadstation.com. These sites pay everyone (no matter if the files are pirated or not) and have NO repeat infringer policy. And they are using PAYPAL to pay infringers."

What kind of affect this hand on MegaUpload's rivals, if any, is unclear. A PayPal spokesman was not immediately available for comment.

The FBI has shut down MegaUpload and the site's userdata is in limbo while the company tries to work a deal with the U.S. government.