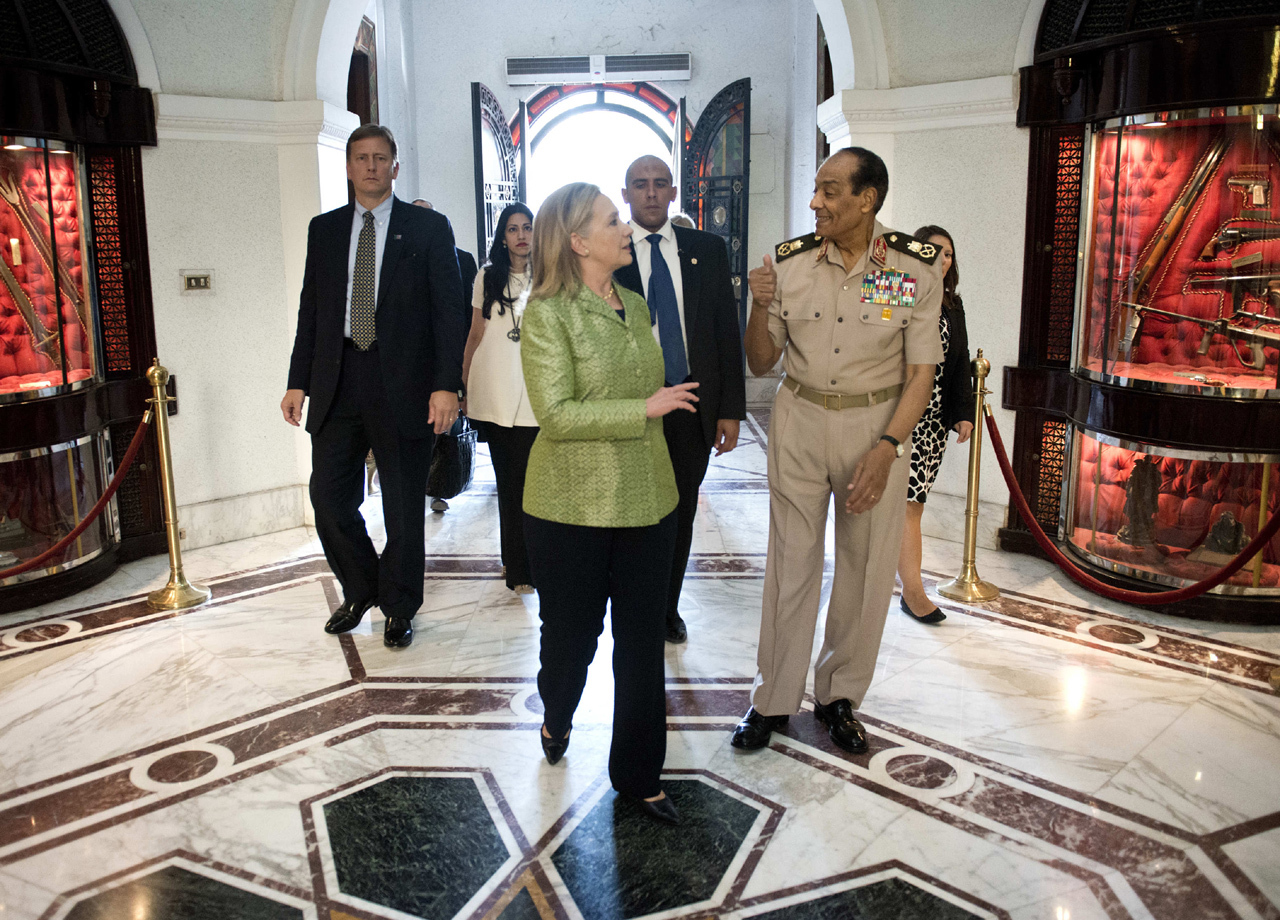 (AP) CAIRO - Having pressed the new Egyptian president, U.S. Secretary of State Hillary Rodham Clinton on Sunday sought to mobilize what influence the United States still has with the army chief whose key role in post-Hosni Mubarak Egypt is splitting the country between those who see the military as a threat to democracy and those clinging to it as a guarantor of stability.

The United States sees it as a bit of both.

Clinton's demand to the military was simple: Work with Egypt's new Islamist leaders on a full transition to civilian rule.

But with the U.S. having already approved yet another massive delivery of military aid, it was unclear what leverage the Obama administration has as it seeks to stabilize Egypt and build a new relationship with America's once ironclad Arab ally.

Clinton's meeting with Field Marshal Hussein Tantawi in Cairo came with Egypt's transformation from dictatorship to democracy in peril. Clinton and Tantawi met for more than an hour.

"They discussed the political transition and the (military council's) ongoing dialogue with President Morsi," a senior State Department official said, providing details of the private meeting on condition of anonymity. "The secretary stressed the importance of protecting the rights of all Egyptians, including women and minorities."

Tantawi, according to the official, focused on Egypt's economic needs and the two discussed U.S. aid plans.

Tantawi's council of generals is locked in a tense political standoff with the Muslim Brotherhood after curtailing the powers of its victorious President Mohammed Morsi on the eve of his inauguration last month and enforcing a court decision dissolving the Islamist-dominated parliament. Together the actions have created an atmosphere where no one is quite sure who is in control and where Egypt is headed.

Clinton to Egypt's Morsi: Find way out of crisis
Egypt's president promises to respect courts
No winners yet in Egypt's power struggle

Seventeen months after the street demonstrations that ousted Mubarak, the United States is left without a friend and with little influence among a host of old and new political actors who can't seem to chart a mutual path forward. Calling for compromise and consensus on Saturday after her first ever meeting with Morsi, Clinton staked out a middle ground in the dispute. Yet the immediate effect of her exhortations was nothing.

For the Obama administration, the old prism supporting Egypt's military leaders as bedrock allies shattered with Mubarak's demise. It wants to safeguard U.S. interests in the region, from counterterrorism cooperation to Arab-Israeli peace efforts, but its agenda remains on hold while the Arab world's most populous nation remains mired in turmoil. The lack of clarity over who is going to prevail from Egypt's political maneuvering is only adding to the paralysis.

Clinton, who earlier this year certified sufficient Egyptian action toward democracy for $1.3 billion in U.S. military aid to go through, carried the same message to Tantawi as Morsi. Without taking a position in disputes over parliament or how to draft a new constitution, Clinton urged the long-time military chief to return the armed forces to a "purely national security role," as she termed it Saturday.

Her criticism was muted, however. Clinton commended the military for defending lives during the February 2011 revolution against the former president and for the progress Egypt made under its interim leadership, which included free and fair elections. And she contrasted the approach with how Syria's military is "murdering their own people," while recognizing that the Egyptian military authorities still needed to do more.

It was unclear if she adopted a tougher tone with Tantawi behind closed doors or what that might even yield from the generals, whose distrust of America is now almost as strong as that of the Brotherhood.

The United States is in a difficult spot, eager to be seen as a champion of democracy and human rights after three decades of close cooperation with Mubarak despite his abysmal record in advancing either. This has involved some uncomfortable changes, including occasionally harsh criticism of America's once faithful partners in the Egyptian military and words of support for Islamist parties far more skeptical of U.S. motivations for Egypt and the region.

Appearing alongside Clinton at a news conference Saturday, Foreign Minister Mohammed Amr said Morsi stressed in his meeting with the American secretary that he would respect all treaties Egypt has entered into, which includes the landmark 1979 peace accord with Israel.

According to Amr, the president spoke in favor of a comprehensive Israeli-Palestinian peace deal along the 1967 borders and with east Jerusalem as the capital of the future Palestine — a moderate Arab vision for a two-country solution that his party members have been often vague on in the past.