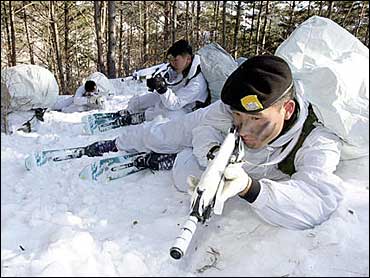 The Pentagon and State Department are developing sanctions to use if North Korea escalates the nuclear crisis — especially if it takes advantage of war in the Middle East, a newspaper reports.

Last week, the International Atomic Energy Agency referred North Korea's case to the United Nations Security Council, which could impose sanctions. That seems unlikely, since China and Russia oppose them and North Korea has vowed to treat new sanctions as acts of war.

But according to the New York Times, the U.S. is considering ways of cutting off North Korea's weapons sales and halting the flow of cash to North Korea from expatriates.

The planning is being conducted because some feel North Korea will soon test long-range missiles or begin reprocessing spent nuclear fuel into material that could be used for bombs. It may make these moves if the United States goes to war against Iraq.

In addition to the draft sanctions, the Times reports, the U.S. is developing other ways to pressure the North. The first step might be getting the Security Council to condemn North Korea's nuclear program. Another hope is that Russia and China — North Korea's main trading partners — will squeeze Pyongyang to back down.

The two types of draft sanctions both attack the North's supply of money.

The United States accuses Pyongyang of proliferating dangerous weapons around the globe; the U.S. military is looking at ways it might intercept these arms shipments.

The U.S. also believes that proceeds from North Korean gambling houses in Japan go back to fund the military. The sanctions might aim to stem that flow as well.

The current dispute began in October, when the U.S. confronted North Korea with evidence that it had launched a uranium-based nuclear program.

The U.S. claimed this violated a 1994 agreement, and cancelled fuel shipments authorized under that pact. North Korea responded by withdrawing from the Nuclear Nonproliferation Treaty, expelling nuclear inspectors and vowing to restart its Yongbyon plutonium processing plant.

North Korea argues that it has reason to feel threatened by the United States. President Bush said North Korea belonged to an "axis of evil;" another member of that axis, Iraq, now faces attack. The North also claims to be frightened by the new U.S. policy of preemptive strike.

Pyongyang had demanded face-to-face talks with the United States, and asked for a non-aggression pact. The U.S. has avoided one-on-one negotiations and says it has no intention of invading North Korea.

But that doesn't mean the U.S. is afraid to flex its muscles. The U.S. military said Monday it will conduct two joint military exercises with South Korea next month, but added the annual maneuvers are not related to the nuclear dispute with North Korea.

There was no immediate response from North Korea over the upcoming exercises, but the communist country has routinely denounced past joint U.S.-South Korea military exercises as preparations for an invasion.

One of the exercises — called "Reception, Staging, Onward Movement and Integration," or RSOI — will take place March 19-26. A second exercise, Foal Eagle, is scheduled for March 4-April 2, the military statement said.

Foal Eagle, the largest joint U.S.-South Korea field training exercise, has been held since 1961. The RSOI began in 1994.