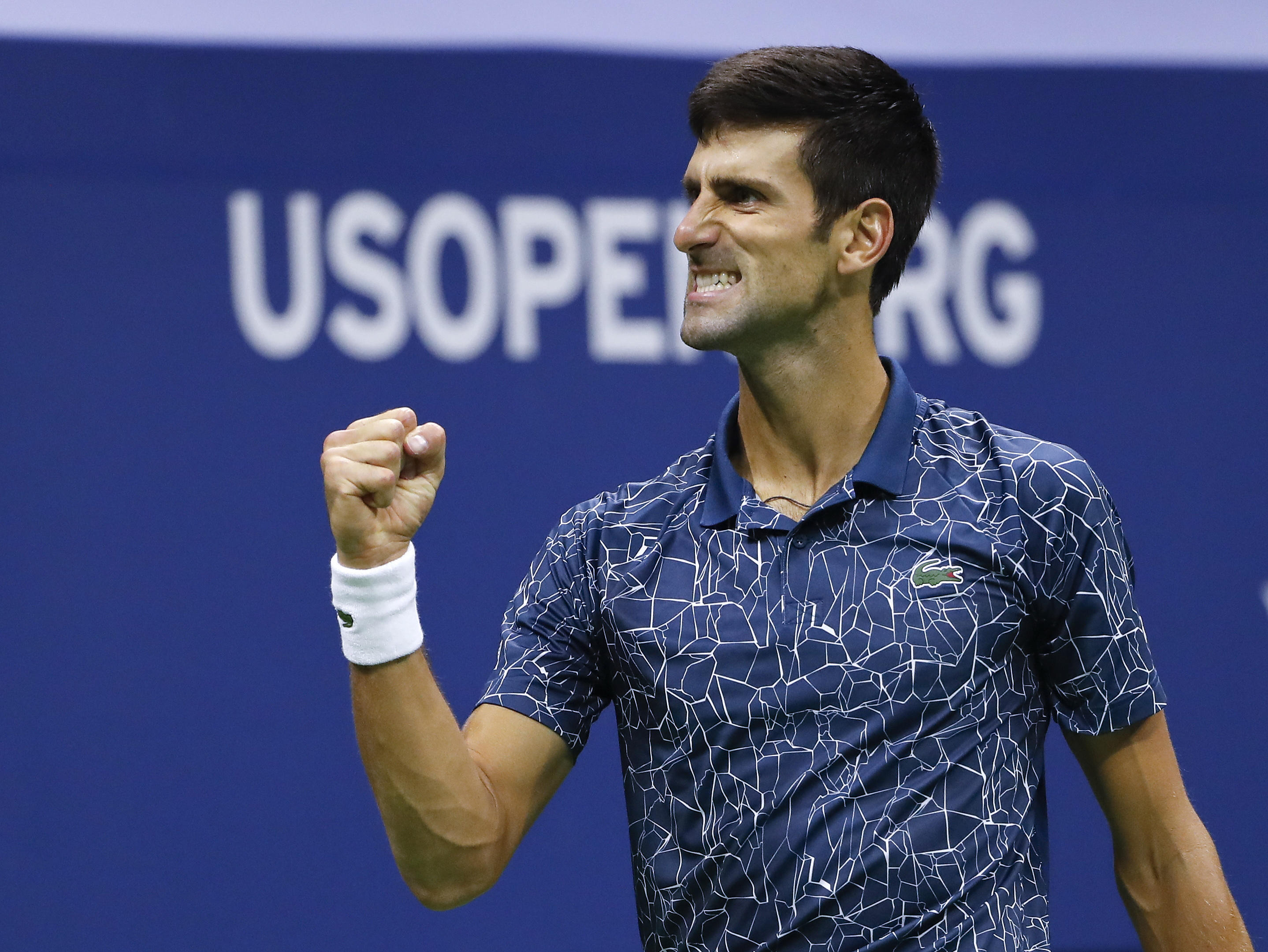 NEW YORK — Novak Djokovic won his 14th Grand Slam title and second in a row by getting through a key 20-minute game to beat 2009 champion Juan Martin del Potro 6-3, 7-6 (4), 6-3 in the U.S. Open final. The victory Sunday comes a year after Djokovic sat out the tournament at Flushing Meadows because of an injured right elbow that eventually required surgery.

The 31-year-old Serb is now even with Pete Sampras for the third-most major trophies for a man in tennis history, trailing only Roger Federer's 20 and Rafael Nadal's 17.

Djokovic was far superior to del Potro in the opening set, then dropped three consecutive games in the second to trail 4-3. But when Djokovic faced three break points in the following game, an epic that required 22 points to settle, he saved them all. A series of missed forehands by del Potro in the tiebreaker put Djokovic back on course. He finished with a flourish, taking the last three games.

This was Djokovic's third championship in New York, along with those in 2011 and 2015. Add in the trophies he has earned at six Australian Opens, one French Open and four Wimbledons, most recently in July, and the 31-year-old Serb pulled even with Pete Sampras for the third-most majors among men, trailing only Roger Federer's 20 and Rafael Nadal's 17.

"I was hoping he was going to be here, but he's not," Djokovic said about Sampras. "He's my idol. Pete, I love you."

Federer lost in the fourth round in New York, while Nadal retired from his semifinal against del Potro because of a bad right knee. That put the 29-year-old Argentine back in a Grand Slam final for the first time since his breakthrough nine years ago, a comeback for a guy who had four wrist operations in the interim.

"I'd just like to congratulate Juan Martin ... for still having faith, for still having belief in himself," said Djokovic, who gave his pal a hug at the net, and then went over to console del Potro as he wiped away tears at his sideline seat. "I believe he'll be here again with the champion's trophy. I really do."

Del Potro spoke this week about the low point, in 2015, when he considered quitting the sport. But supported by a dozen or so friends from back home, whose "Ole!" choruses rang around the arena, he climbed up the rankings to a career-high No. 3 by thundering his 100 mph (160 kph) forehands and 135 mph (215 kph) serves.

Those produce free points against so many foes. Not against Djokovic, who always seemed to have all the answers.

Djokovic was better than del Potro on their many lengthy exchanges, using his trademark body-twisting, limb-splaying court coverage to get to nearly every ball, sneakers squeaking around the blue court in Arthur Ashe Stadium, where the roof was closed because of rain.

Never was that more apparent than the game that stood out on this evening: with Djokovic serving while down 4-3 in the second set. They went back and forth, through eight deuces and all those break opportunities for del Potro, until he slapped one forehand into the net, and another sailed wide.

The game went so long that when it ended, with Djokovic holding to 4-all, spectators began leaving their seats, perhaps thinking it was time for a changeover, even though it wasn't. That prompted to chair umpire Alison Hughes to chastise them.

It was a brief request, though, unlike her many other pleas for quiet, mainly as fans were shouting and chanting and clapping in support of del Potro. It all bothered Djokovic, who started yelling and gesturing toward the seats. At one moment, he pressed his right index finger to his lips, as if to say, "Shhhhhhh!" Later, after winning a point, Djokovic put that finger to his ear, as if to say, "Who are you cheering for now?!"

The tiebreaker was resolved thanks to more del Potro miscues on his forehand side, as he looked more and more fatigued. He made one last stand by breaking and holding for 3-all. But that was that.

When it ended, thanks to a three-game closing run by Djokovic, he flung his racket away and landed on his back, arms and legs spread wide.