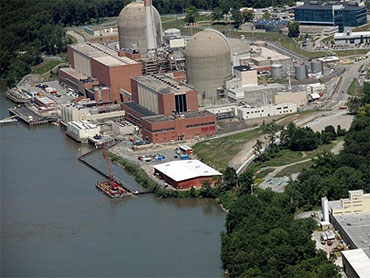 ROCKVILLE, Md. - A top official at the U.S. Nuclear Regulatory Commission said Monday that the situation at the Japan's stricken Fukushima nuclear plant appears to be stabilizing.

Dr. William Borchardt, the NRC's executive director for operations, said that the imminent restoration of power to the Fukushima's reactors is "perhaps the first optimistic sign that we have that things could be turning around."

He said containment vessels at three Fukushima reactors are intact and receiving injections of cooling water and that the formerly volatile situation involving spent fuel pools has also stabilized.

The NRC met to get an update from staff on the ongoing crisis in Japan and devise a plan to meet President Barack Obama's call for a comprehensive safety review at the 104 U.S. nuclear reactors.

NRC Chairman Gregory Jaczko said the agency was likely to perform a short-term review of existing nuclear reactors, "and then probably a much longer look" based on information from Japan.

Jaczko promised a "methodical" examination of the accident at the Fukushima Dai-ichi plant and a thorough review of U.S. practices going forward.

NRC staff is in Tokyo conferring with Japanese government and industry officials on the disaster.

Borchardt laid out a plans for immediate "temporary inspections" of the 104 operating nuclear reactors in the U.S., as well as a 90-day review of nuclear safety and a longer-term look at "lessons learned" from the Japanese disaster that will likely emerge over months or years.