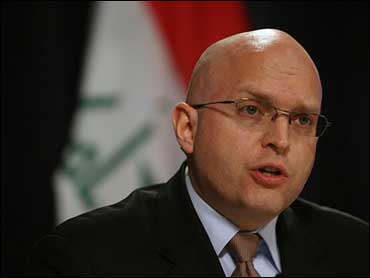 The U.S. military on Thursday described a decision by predominantly Sunni fighters to join in the battle against al Qaeda in Iraq as the country's most significant development of 2007, but said the challenge now would be their integration into society.

The military also announced that an insurgent killed last month was just identified as a senior leader of al Qaeda in Iraq and a former associate of its leader Abu Musab al-Zarqawi - who was slain by U.S. forces last year.

Police in Mosul, the capital of the province 225 miles northwest of Baghdad, said the roadside bomb exploded in a residential area. Police Brig. Abdul-Karim al-Jibouri said the children, aged 10 to 13, had been on their way to school.

Despite the attacks, violence in Iraq has dropped by 60 percent since June, the U.S. military has said.

U.S. military spokesman Maj. Gen. Kevin Bergner said Wednesday that that the creation of groups known as Awakening Councils - which the U.S. military has dubbed Concerned Local Citizens - was a key factor in the reduction of violence.

"This is the most important development of 2007," Bergner said. "This was a decision by Iraqi citizens to confront al Qaeda and kick them out of their neighborhoods."

The big challenge for 2008, Bergner added, was how to integrate them into Iraqi society.

"The government of Iraq has recently taken the decision to assume responsibility for those citizens, to give them financial compensation and accept qualified individuals in the ranks of the security forces," Bergner said.

In some areas, there are "mixed Sunni and Shiite citizens groups. It is not just Sunnis now, although it is largely Sunni," Bergner said.

But the Shiite-dominated government is concerned about the Sunni tribal groups, made up of men who in the past also fought against government forces.

"As with any transition there is a need to build confidence between individuals who at one time had been fighting the government and coalition forces," Bergner said.

His comments came as a top U.S. commander, Maj. Gen. Rick Lynch, warned on Tuesday that the groups must be rewarded and recognized as legitimate members of Iraqi society - or else the hard-fought security gains of the past six months could be lost.

Lynch has credited these groups for much of the improvement in security in the region he commands, an area south of Baghdad that stretches to the Iranian and Saudi Arabian borders.

"The people say security is good now, but we need jobs. It's all about jobs and we have to create them," he told The Associated Press as he flew into patrol base Salie, just south of Baghdad - where U.S. troops fund about 150 members of the tribal groups. "We are in a tenuous situation. We need to give jobs to the citizens (groups) or they will go back to fighting."

Lynch, who leads the 3rd Infantry Division, said he had 26,000 members of the groups in the area he controls and that they have given U.S. and Iraqi forces a key advantage in seeking to clear extremist-held pockets. They number about 70,000 countrywide, and are expected to grow by another 45,000 in coming months.

The U.S. military now funds the groups, but they expect to be rewarded for their efforts with jobs, either in the Iraqi security forces or elsewhere.

"They want to be recognized as legitimate members of society and that has to happen," Lynch said as he flew over an area south of Baghdad once known as the "triangle of death."

He said the groups helped reduce violence in his area, a former Sunni insurgent hotbed, by 75 percent in the past six months.

"The government of Iraq has to take advantage of this opportunity," by focusing on economic development and governance, he said.

U.S. officials have said there are plans to absorb about 20,000 of the men into the security forces, and America plans to spend $155 million to help create new jobs and provide vocational training. The Iraqi government has pledged to match that amount.

"A certain number will transition to the Iraqi security forces and there will be a larger number going into civilian hobs," U.S. Embassy spokesman Phil Reeker said Wednesday. "It will be over $300 million that will be allocated to job creation, vocational training and to transition these people in 2008."

He added that transition "will be the focus of our combined effort with the government of Iraq. There is a significant demand for skilled labor as well as those people who want to join security forces."

On the battlefields south of Baghdad where al Qaeda had for years attacked U.S. forces, Lynch said "I see great progress because citizens are taking things into their own hands. Now we have to connect the dots."

"It's tenuous. This could still go backward," he added.

In Baghdad, the U.S. military said that an insurgent killed north of Baghdad on Nov. 8 had been identified as Abu Abdullah, also known as Muhammad Sulayman Shunaythir al-Zubai.

He was described as "an experienced bomb maker and attack planner who coordinated numerous attacks on Coalition and Iraqi forces over the past three years, using a variety of improvised explosive devices combined with small-arms fire."

Michael O'Hanlon of the Brookings Institution says that the military is likely to see more violence, such as roadside attacks and suicide bombings in Afghanistan.

"There are NATO troops in Afghanistan, but no where near the levels we have in Iraq," says O'Hanlon told The Early Show. "I think we're going to have to be very concerned, especially with the economy there being so weak and depending on opium primarily."