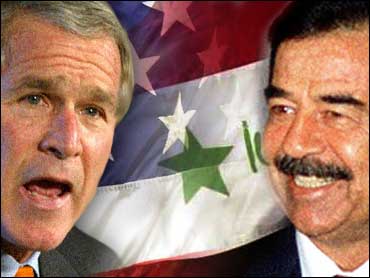 Today's the day that the U.S. is expected to present the United Nations Security Council with the rewrite of its resolution on Iraq.

The latest draft of the resolution offers some major concessions to critics of the previous version, while remaining true to its original mandate, which is to give Iraqi leader Saddam Hussein "a final opportunity" to comply with U.N. weapons inspectors or risk "serious consequences" if he does not.

A vote on the U.S.-sponsored resolution could come by the end of this week.

The latest version of the resolution, according to a copy obtained by the Associated Press, still leaves room for the United States to take military action against Iraq without seeking a second U.N. resolution and vote.

In an effort to meet the concerns of Russia and France, the new draft significantly waters down references to Iraq being in "material breach" of its obligations under U.N. resolutions to "disarm" words, which Moscow and Paris argued could be used by the United States to trigger a war against Iraq.

The draft, circulated privately Tuesday, is subject to change.

The U.S. proposal now states that Iraq "has been and remains in material breach" of its obligations, but it adds a "carrot" to Baghdad, which France and Russia pushed for.

While recognizing that Iraq is in "material breach," the Security Council would now decide "to afford Iraq, by this resolution, a final opportunity to comply with its disarmament obligations."

A second reference reiterates that any "false statements or omissions" in Iraq's declaration of its weapons programs or failure to comply with inspectors "shall constitute a further material breach" but the new draft adds that this failure will be reported to the Security Council "for assessment."

It requires Iraq to provide inspectors with "immediate, unimpeded, unconditional, and unrestricted access to any and all" buildings and sites. It does not specifically mention presidential sites, where advance notice was previously needed for inspections.

The five permanent council members with veto power the United States, Russia, China, France and Britain were expected to meet before Wednesday's full council session with the other 10 members.

In an extensive round of last-minute diplomacy, U.S. Secretary of State Colin Powell spoke to Foreign Ministers Dominique de Villepin of France, Igor Ivanov of Russia and Jorge Castaneda of Mexico, who has supported the French-Russian position.

"We think we've put together a strong resolution with good support ... that sends a strong message to Iraq," a senior U.S. administration official said in Washington. "[The resolution] makes clear that Iraq is in material breach. It provides a very tough inspection regime and makes clear there are serious consequences if Iraq doesn't comply."

Russia, France and China had argued that Washington could use references to "material breach" and "serious consequences" to launch an attack on Iraq without Security Council authorization. They want the possibility of force only to be considered in a second resolution if Iraq fails to comply with U.N. inspectors.

The new U.S. draft would require U.N. inspectors "to report immediately to the council any interference by Iraq with inspection activities, as well as any failure by Iraq to comply with its disarmament obligations."

The Security Council would then convene immediately "to consider the situation and the need for full compliance" by Iraq but it makes no mention of adopting a second resolution.

The U.S. official, speaking on condition of anonymity, said Powell worked out some of the final points on key issues with de Villepin, and was continuing to work with others.

But a French diplomat said late Tuesday: "It's too early to say we have an official position on a text that Paris doesn't yet have in hand."

"We have to see the text. We must send it to Paris and our government, including the president, will have a careful look at the entire text, not only one or two paragraphs," the diplomat said, speaking on condition of anonymity.

Another council diplomat called it "a partial deal" that still needs work.

France, Russia and the other Security Council members were waiting to see the final wording in the U.S. text.

Russia's deputy parliament speaker, Vladimir Lukin, said in Paris Tuesday that Moscow is optimistic the Security Council will reach a compromise. He said, however, that Russia remains skeptical of U.S. claims that Saddam is developing weapons of mass destruction.

Powell said in an interview published Tuesday that the revised U.S. draft takes French and Russian views into account. But he reiterated to the French daily Le Figaro that the United States cannot be "handcuffed" if it decides action is necessary.

Mexico's Castaneda said Monday he believed there was agreement on a revised draft that would be approved by 14 of the 15 council members with Syria abstaining. However, Mexico, a Security Council member, would likely abstain if there is not consensus among the major powers, Castaneda added.

For a resolution to be approved by the council, it needs at least nine "yes" votes and no veto by the permanent members.

The search for an Iraq resolution began Sept. 12 when U.S. President George W. Bush challenged world leaders at the U.N. General Assembly to deal with Iraq's failure over the last 11 years to comply with resolutions or stand aside as the United States acted.