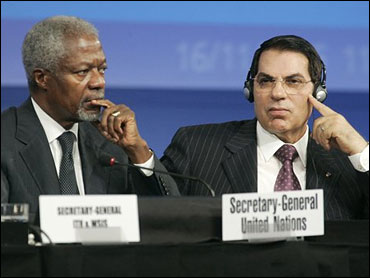 A summit focusing on narrowing the digital divide between rich and poor residents and countries opened Wednesday with an agreement of sorts on who will maintain ultimate oversight of the Internet and the flow of information, commerce and dissent: The U.S., for now.

The World Summit on the Information Society had been overshadowed by a lingering, if not vocal, struggle about overseeing the domain names and technical issues that make the Internet work and keep people from Pakistan to Canada surfing Web sites in the search for information, news and buying and selling.

"The Internet transformed global communication, good and bad," says CBS News Foreign Affairs Analyst Pamela Falk. "The point of the Tunis-based U.N. summit is to expand the positive use of the Web in developing world."

Negotiators from more than 100 countries agreed late Tuesday to leave the United States in charge of the Internet's addressing system, averting a U.S.-EU showdown at this week's U.N. technology summit.

U.S. officials said early Wednesday that instead of transferring management of the system to an international body such as the United Nations, an international forum would be created to address concerns. The forum, however, would have no binding authority.

Assistant Secretary of Commerce Michael D. Gallagher, however, said the deal means the United States will leave day-to-day management to the private sector, through a quasi-independent organization called the Internet Corporation for Assigned Names and Numbers, or ICANN.

The onus now lies with the developing world to bring in not just opinions, but investment to expand the Internet to their benefit, he said.

Speaking to reporters, David Gross, the State Department's top official on Internet policy, said that despite the U.S. hand in ICANN, Internet governance was not the provenance of one specific country.

"The term ... is quite broad, it is very inclusive," he said, trying to dismiss claims that the U.S. is holding onto its position as the arbiter of the Internet.

The accord reached late Tuesday also called for the establishment of a new international group to give more countries a stronger say in how the Internet works, including the issue of making domain names — currently done in the Latin languages — into other languages, such as Chinese, Urdu and Arabic.

Under the terms of the compromise, the new group, the Internet Governance Forum, would start operating next year with its first meeting opened by Annan. Beyond bringing its stakeholders to the table to discuss the issues affecting the Internet, and its use, it won't have ultimate authority.

Viviane Reding, the EU Commissioner for Information Society and Media, said the agreement paved the way for better Internet governance.

"This agreement was possible because of the strong belief of all democratic nations that enhanced international cooperation is the best way to make progress towards guaranteeing the freedom of the Internet around the globe and also to enhance transparency and accountability in decisions affecting the architecture of the Web," she said.