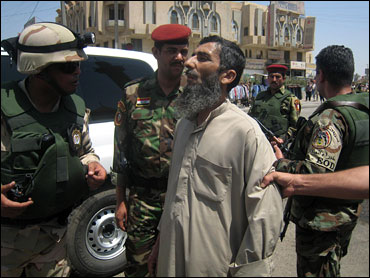 An al Qaeda in Iraq front group warned Tuesday that insurgents were waiting for the right moment to retaliate against a U.S.-Iraqi security crackdown in the northern city of Mosul.

Gunmen killed a policeman near his station in Mosul, when attackers opened fire with machine guns shortly before noon about 100 yards from the Hadba police directorate, officials said.

Interior Ministry spokesman Maj. Gen. Abdul-Karim Khalaf ordered an immediate investigation and expressed concern that the policeman had been killed in broad daylight Tuesday in an area that was crowded with Iraqi policemen and pedestrians.

Mosul, located 225 miles northwest of Baghdad, has been dubbed by the U.S. military as al Qaeda's last major urban stronghold in Iraq. The Iraqi government launched an offensive, dubbed Operation Lion's Roar, there earlier this month to clear the area.

Officials have claimed initial success, saying more than 1,200 suspects have been detained, and Iraqi security forces have met little resistance.

But a man claiming to be a spokesman for the Islamic State of Iraq in Ninevah province, which includes Mosul, warned in a videotape posted Tuesday that insurgents were prepared to fight back.

"Until now, we have not been engaged ... because we are the ones who control the hour to start the initiative and we will choose the time for retaliation or engagement," the unidentified spokesman said, sitting with his face covered behind a table with a laptop and wearing a white Arab robe.

"We are at full strength and have not had a single soldier killed or arrested contrary to your alleged reports" of major arrests, he said.

He said that during the first week "of the so-called the Lion's Roar operation" many people from Mosul were arrested, but he claimed they were merely former army officers, university teachers and students.

There was no way to authenticate the comments. But the video was said to have been produced by al-Furqan, one of al Qaeda's media production wings, and it was posted on a number of Islamic Web sites that usually carry militant statements.

The spokesman also said members of the group would not comply with a government call to hand over weapons, drawing a comparison with similar offensives against Shiite extremists led by anti-U.S. cleric Muqtada al-Sadr's Mahdi Army in the southern city of Basra and Baghdad's Sadr City.

"We tell (Prime Minister Nouri) al-Maliki that the soldiers of the Islamic State of Iraq are not like those from the charlatan Mahdi Army who surrendered their weapons to the soldiers of the crusade for few dollars," he said. "We will not hand over our weapons."

The U.S. military said Sunday that al Qaeda in Iraq was "off-balance and on the run" after recent operations against it but remains a very lethal threat.

Maj. Gen. Mark Hertling, the top American commander in northern Iraq, also said last week that the military expected the insurgents to try to regroup and strike back against the two-week-old offensive with car bombs and suicide attacks.