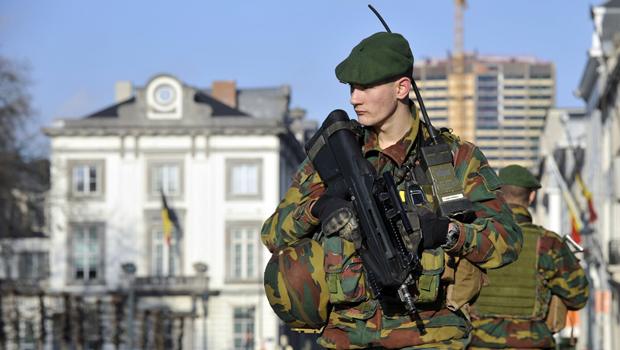 Four people believed to be connected to a plot to attack Belgian police were arrested Saturday in Athens, but Belgian officials told CBS News that the men had no link to the terror plot.

Belgian federal magistrate Eric Van der Sypt told CBS News that his office made the determination based on information shared by Greek police.

Earlier, a U.S. law enforcement source overseas confirmed to CBS News that among those arrested was a man authorities suspected of being the ringleader, an Algerian man who had traveled in Syria, the source said.

A U.S. official confirmed to CBS News senior investigative producer Pat Milton that the suspected ringleader returned from Syria and allegedly ran the operation from Greece to attack police and government officials in Belgium.

In Belgium, paratroopers fanned out to guard possible terror targets across the country, including some buildings within the Jewish quarter of the port city of Antwerp. It was the first time in 30 years that authorities used troops to reinforce police in Belgium's cities, and came a day after anti-terror raids netted dozens of suspects across Western Europe.

Of the 13 suspects detained in the Belgian sweep on Thursday, three were put under arrest, two were released under conditions while the eight others were freed by the weekend. A European arrest warrant was issued against two others who had fled into France, Van der Sypt said.

Despite the release of several men, he said, "the people we wanted to have arrested, have been arrested."

Belgium has increased its terror warning to 3, the second-highest, following the anti-terror raids of Thursday which left two suspects dead amid fears they had been planning imminent attacks on police and their offices.

Justice Minister Koen Geens told VTM network Saturday that "we hope the worst has been avoided but we need to prepare for the most difficult to come."

Some 150 paratroopers were watching synagogues in Antwerp, the Jewish Museum in Brussels and other selected building across the nations. The figure could be double in the coming days until the situation will be reviewed next week.

Not everyone thought this would calm nerves. "You know, when people see the soldiers on streets they will get scared. That could make more problems than solutions," said student Greg Verhoeven in Antwerp.

French, German, Belgian and Irish police had at least 30 suspects behind bars on Friday. In Brussels, authorities said a dozen searches led to the seizure of four Kalashnikov assault rifles, hand guns and explosives. Several police uniforms were also found, which Belgian authorities said suggested the plotters had intended to masquerade as police officers.

The seizures followed an anti-terrorism sweep on Thursday in and around Brussels and the eastern industrial city of Verviers in which two suspects were killed in a firefight and a third was wounded. Authorities said the follow-up operation netted several returnees from Islamic holy war in Syria.

Authorities have said there was no apparent link between the foiled plots in Belgium and last week's terror attacks in Paris on the newspaper and a kosher supermarket.