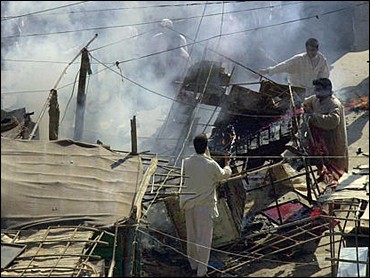 Backed by helicopters, American tanks charged into the center of the holy city of Najaf on Friday and shelled positions held by fighters loyal to cleric Muqtada al-Sadr, who launched an uprising against the U.S.-led coalition last month. In a sermon in a nearby city, a defiant al-Sadr condemned the United States and its chief coalition partner, Britain.

Civilians scurried for cover, leaving many streets empty as the call for Friday prayers rose from loudspeakers at mosques. Some families left their homes on foot to seek refuge.

The U.S. attack represented a strongest U.S. push yet against al-Sadr, whose forces fought intense battles with American forces this week in another holy city, Karbala.

The intensifying battles have eclipsed efforts by Iraqi political and tribal leaders to seek a peaceful solution to the confrontation ahead of a planned transfer of sovereignty to Iraqis on June 30.