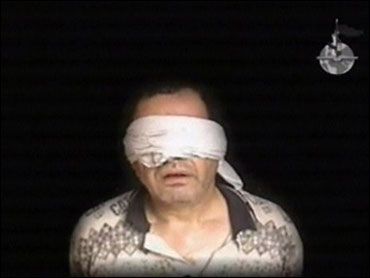 The U.S. military Thursday announced the capture of a key suspect in the kidnap-slaying of Egyptian envoy Ihab al-Sherif and attacks on senior diplomats from Pakistan and Bahrain.

Egypt's top diplomat to Iraq, Ihab al-Sherif was kidnapped earlier this month by al Qaeda in Iraq. The group said in an Internet posting that it killed al-Sherif several days later.

Meanwhile, two suicide bombers struck near the Green Zone in central Baghdad on Thursday, but a third was wounded and captured by U.S. and Iraqi security forces, officials said. Two policemen died and another seven people were wounded in the blasts.

Al Qaeda in Iraq claimed responsibility in a Web posting for Thursday's blasts, but the claim's authenticity couldn't be verified.

For a time, Iraqi parents kept their children away from American troops. But lately, it seemed, the kids had come back. The troops took that as a positive sign that the community was starting to trust them.

That may be exactly why the patrol was hit, says Dozier: a brutal, bloody message that militants will strike anyone — even a child — who mixes with the enemy.

The Thursday attacks took place at a checkpoint near the Green Zone, where the U.S. Embassy and Iraqi government offices are located.

"Two bombers approached the checkpoint shortly before 9 a.m. after a car bomb exploded near the same checkpoint," a U.S. military statement said. "A suicide bomber detonated himself and the other suicide bomber tried to run away from the scene. Iraqi police shot the man and were evacuating him when they discovered the vest" packed with explosives.

An Iraqi bomb squad team disarmed the explosives, the military said. Police initially reported that they had killed the third bomber.

Also on Thursday, gunmen attacked an Iraqiyah TV crew covering funeral ceremonies for some of the victims, wounding two, police said. They were treated at a hospital and released.

The bodies of men aged between 25 and 35 were found Wednesday night in the Maamel area on the eastern outskirts of Baghdad, said police Lt. Osama Adnan. They had no identity papers, he added.

The discovery occurred amid increasing tension between the country's Sunni Muslim minority and the Shiite-dominated government of Prime Minister Ibrahim al-Jaafari.

It was not clear if the dead men were Sunnis or Shiites, who make up the majority in Iraq. The influential Sunni Muslim Association of Muslim Scholars and the Iraqi Islamic Party, the country's largest Sunni political group, said they had no information about the incident.

A group of Sunni Muslim clerics and politicians, however, urged fellow Sunnis on Thursday to take part in the coming elections, saying it is in their interest if they want to play a bigger political role in the future. Many Sunnis boycotted the January ballot.

On Wednesday, the association accused Iraqi security forces of detaining, torturing and killing 11 Sunni Arab men, including a cleric.

Sunni groups also accused security forces of allowing at least nine Sunnis detained last weekend to suffocate after locking them for hours in a van without ventilation as temperatures soared to 115 degrees Fahrenheit.

The Iraqi Interior Ministry said both allegations are being investigated, and if true, those responsible will be punished.

There had been tit-for-tat killings between Sunnis and Shiites in the past. In May, 10 clerics from both sects were killed as well as dozens of followers from both groups.