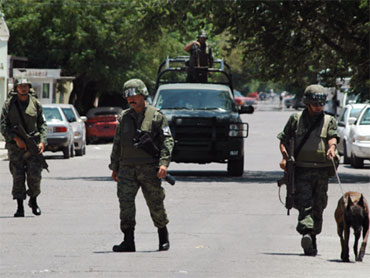 The U.S. closed its consulate in the Mexican border city of Ciudad Juarez on Thursday pending a security review, an unexpected decision that comes months after drug gangs killed three people tied to the consulate.

The U.S. Embassy announced the consulate will "remain closed until the security review is completed" and said it would reschedule appointments for visa applications.

The embassy did not say what prompted the review, and a spokesman said there would be no comment beyond the statement.

Also Thursday, one of the top three leaders of Mexico's most powerful drug cartel died in a gunfight with soldiers, ending the long run of a mysterious capo considered a founder of the country's massive methamphetamine trade.

The death of Ignacio "Nacho" Coronel near the city of Guadalajara is the biggest strike yet against the Sinaloa cartel led by Joaquin "El Chapo" Guzman - Mexico's top drug lord - since President Felipe Calderon launched a military offensive against drug traffickers in late 2006.

A U.S. employee of the consulate, her husband and a Mexican tied to the Juarez consulate were killed March 13 when drug gang fired on their cars as they left a children's party in the city across from El Paso, Texas.

The U.S. State Department has taken several measures over the past months to protect consulate employees and their families from surging violence along Mexico's border with the United States.

Two weeks ago, the consulate in the border city of Nuevo Laredo warned U.S. citizens there to remain indoors as drug gangs fought gun battles and blocked streets with hijacked vehicles.

A turf battle between the Juarez and Sinaloa drug cartels has made Ciudad Juarez one of the world's most dangerous cities. More than 4,000 people have been killed in the city of 1.3 million since the beginning of 2009.

On July 15, a car bomb killed a federal police officer and two others in Ciudad Juarez. Traffickers claimed responsibility.

The embassy warned immigrant visa applicants that the medical clinics where they receive exams as part of their applications "may also close on short notice." It said its call center would call applicants to reschedule appointments, and provided a number that U.S. citizens could call for passport appointment and other services.

Earlier this month, Mexican federal police said that a jailed drug-cartel enforcer claimed that the U.S. consulate employee, Lesley Enriquez, was killed because she had helped a rival gang obtain American visas.

But a U.S. federal official familiar with the investigation said there was no indication Enriquez was involved in any such thing. The official, who was not authorized to speak publicly about the case and spoke on condition of anonymity, said U.S. officials had investigated possible corruption surrounding Enriquez and found none. The official said the motive remains unclear.

U.S. Embassy officials previously said that Enriquez was never in a position to provide visas and worked in a section that provides basic services to U.S. citizens in Mexico.

Enriquez was four months pregnant when she and her husband were killed as they drove toward a border crossing to El Paso, Texas. Their 7-month-old daughter was found wailing in the back seat.

Jorge Alberto Salcido, the husband of a Mexican employee of the consulate, also was killed by gunmen after leaving the children's party in a separate vehicle. The jailed drug gang suspect, Jesus Ernesto Chavez, said Salcido was targeted because the two cars were the same color and the hit men did know which one Enriquez was in.