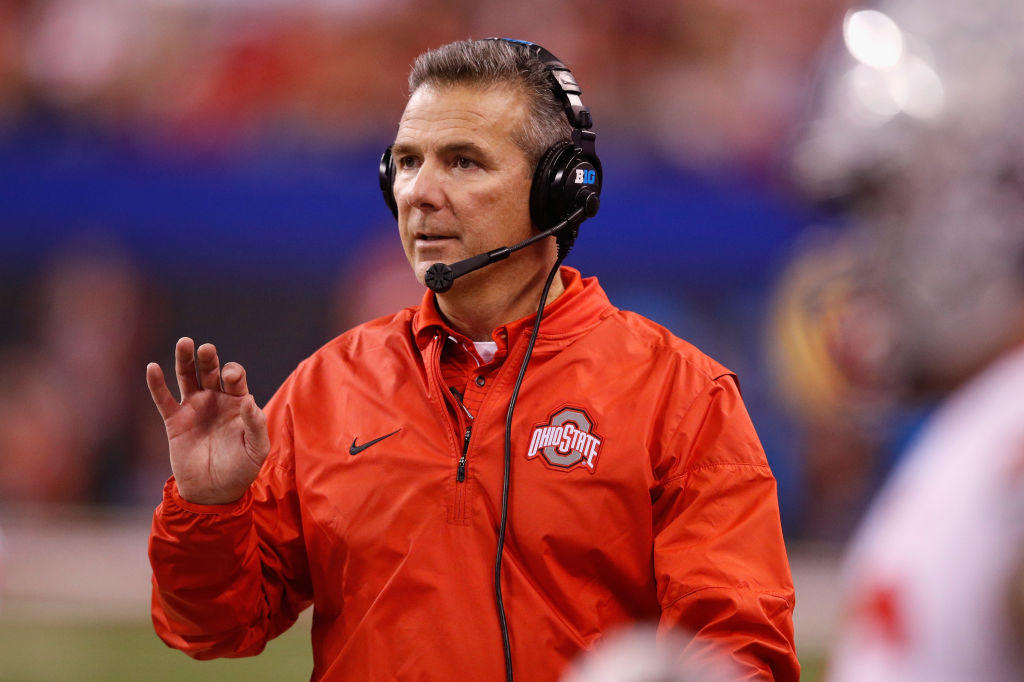 Urban Meyer, the highly successful coach who won three national championships and sparked controversy for his handling of domestic violence allegations against a former assistant, will retire after the Rose Bowl game on New Year's Day, the university said Tuesday.

The university did not say why Meyer was leaving after seven years at the Big Ten school, where he has an 82-9 record. The 54-year-old Meyer has previously cited health concerns; he has an arachnoid cyst in his brain that causes severe headaches, and had shown obvious effects of being in pain on the sideline this season.

Ryan Day, the team's offensive coordinator, will take over as the 25th head coach of the program where Meyer won a national title in 2014 after two at Florida in 2006 and 2008. Day led the Buckeyes when Meyer was suspended for three games to start this season over his role in the handling of assistant coach Zach Smith, who was accused by his ex-wife of domestic abuse.

Meyer said he knew about the allegations against Smith — grandson of former Ohio State coach Earle Bruce — but wasn't sure they were true and kept Smith on staff because no criminal charges were filed. The university cited that lapse in suspending Meyer after an investigation.

When asked Tuesday if the suspension would affect his legacy, Meyer said, "I'm sure it will. I haven't really thought that through. That was a disappointing time, obviously."

A report issued by an investigative committee left a lasting stain, detailing behavior by Meyer that could have taken down a coach of lesser stature. The investigation showed he tolerated bad behavior for years from Smith, including domestic-violence accusations, drug addiction, lies and other acts that directly clash with the values Meyer touts publicly.

The announcement came as the Buckeyes begin preparations for the bowl game against the Washington Huskies and less than three weeks before the early signing period, giving recruits time to change their minds. Former players were full of praise for Meyer.

The Buckeyes' strong finish this season belied on-the-field problems that made for a stressful season for Meyer and his staff. He lost star defensive end Nick Bosa to an early season-ending injury, and the defense never fully recovered.

The team alternated expected blowout wins with puzzling play that included a pair of one-point wins against Penn State and Maryland and a closer-than-expected win over a struggling Nebraska team. A startling blowout loss at unranked Purdue on October 20 pushed Ohio State to the fringe of the national championship chase and prompted questions about Meyer's future and he was forced to addressed speculation that he would step down at the end of the season.

"I plan on coaching," he said on October 29. Asked if he would definitely return to Ohio State next year, he answered, "Yes."

Ohio State followed that with five straight wins, including a rout of archrival Michigan that gave the Buckeyes another division title and then pulled away for an easy win over Northwestern in the Big Ten Championship.

The success was nothing new for Meyer, who was a standout coach at Utah before he left for Florida in 2005 and rocketed to the top of the college football coaching ranks, a peer of Alabama coach Nick Saban in terms of respect and ability. After stepping down at Florida due to stress-related health concerns, he took the Ohio State job before the 2012 season after Jim Tressel was forced out for lying to the NCAA amid a memorabilia-for-tattoos scandal.

It appeared to be a dream job for the Toledo native. His contract was extended in April by two years through 2022, increasing Meyer's salary to $7.6 million in 2018 with annual 6 percent raises. Meyer has about $38 million left on his contract.

Ohio State will now turn to Day, a second-year Ohio State assistant who had never before been a head coach before he stepped in for Meyer this season.