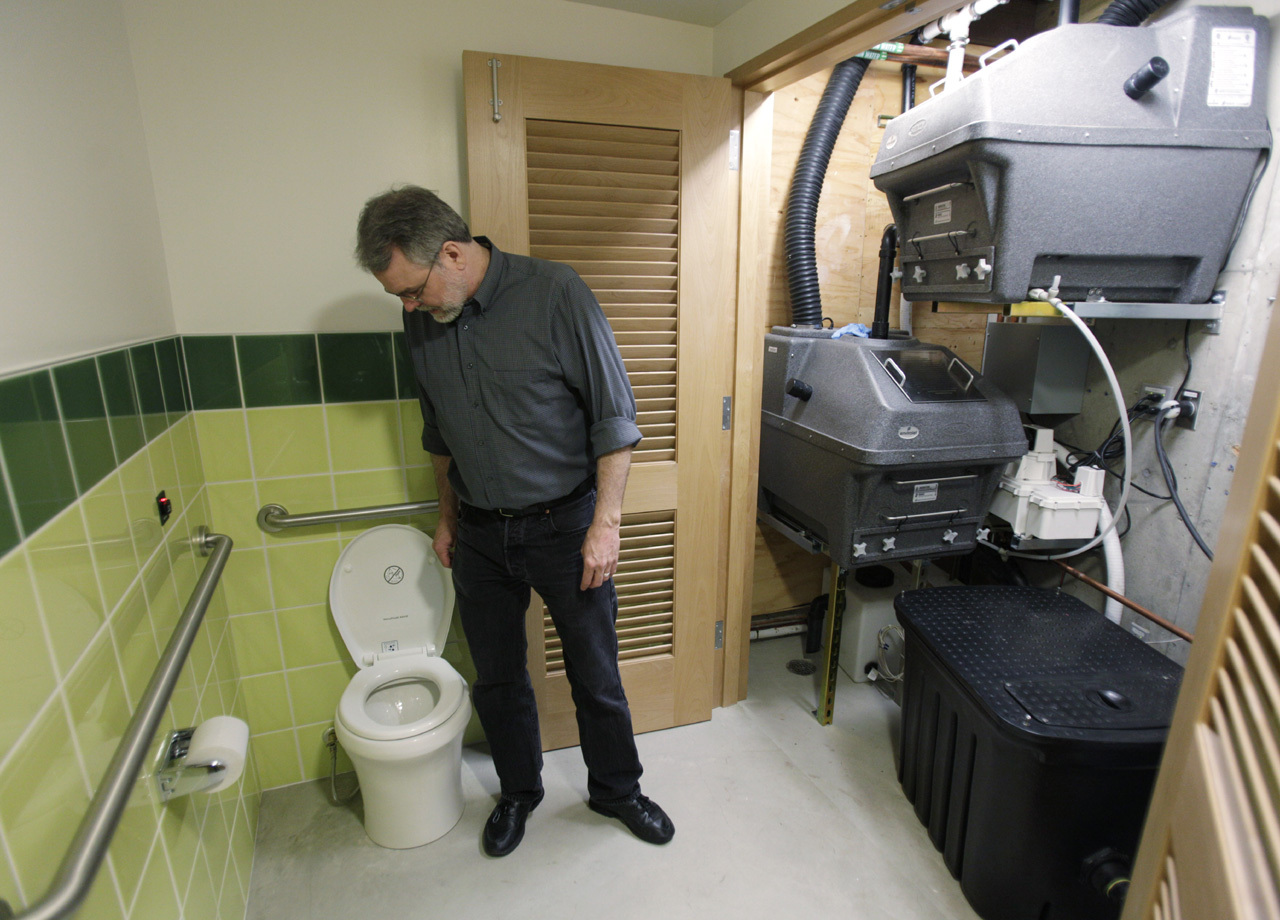 SEATTLE - In one of Seattle's most urban neighborhoods, a small elementary school is trying to wean itself off the city's water grid.

The classroom toilet composts and treats waste on site rather than flushing it into city sewer pipes. Water washed down sinks doesn't flow into storm drains but re-circulates to a 14-foot-high wall filled with plants, which will eventually soak it all up. For now, excess flows through the wall.

Plenty of "green" buildings strive to generate as much energy as they use, but Bertschi School's new science building is one of dozens nationwide taking it a step further. They're attempting to unplug from the municipal water and sewer system to collect, recycle and reuse water and wastewater on site, a concept often referred to as net zero water.

This month, the University of Miami broke ground on a college dormitory that will reuse all water from showers, toilets and laundry for everything except drinking and cooking. With a $2 million grant from the National Science Foundation, researchers are developing an onsite system to convert wastewater into potable water while treating for pharmaceuticals and other contaminants.

"Water is a looming issue after energy," said James Englehardt, a professor of environmental engineering at the University of Miami who is spearheading the project. "Energy and water are intimately linked. We have plenty of water, but it takes a lot of energy to purify it."

Despite Seattle's image as the land of plenty of rain, water conservation is a concern here because summer months can typically be dry.

Proponents say the Seattle school project and others like it recognize water as a precious resource. Treating waste and runoff on site also means reducing the land, infrastructure, energy and chemicals needed to convey water to faucets and later to treat what flows down toilets and bathtubs.

"People are recognizing the limitation of the planet and what's available," said Eden Brukman, vice president of the International Living Building Institute, which runs the "Living Building Challenge," considered the most rigorous green-building performance standards. In the U.S., two projects in Eureka, Mo., and Rhinebeck, N.Y., have been certified as living buildings.

In Washington state, Seattle and Clark County have pilot programs to promote buildings that meet those standards.

The Bertschi School, which opened in February — as well as a midrise building being built in Seattle by the Bullitt Foundation — are aiming for living building status.

Designed to be self-sustaining in the energy, water and waste use, the school's new science building collects rainwater in cisterns. A plant-covered roof slows stormwater runoff, which can carry contaminants into rivers and streams. The building is set up to treat gray water to drinking standards, but it is still drawing water from the city water supply because of public health regulations.

Above: Science teacher Julie Blystad talks to students at the Bertschi School in Seattle, about the use of water in the school's new science building. (AP Photo/Ted S. Warren)

"The state gets really nervous about treating drinking water on site," said Joel Sisolak, Washington advocacy and outreach director for the Cascadia Green Building Council. "Public water supplies and treatment water systems have done a lot of good in promoting public health. The question is, is it still the best model?"

The composting toilet in the new classroom functions much like a vacuum toilet found on airplanes, and it doesn't smell bad.

Stan Richardson, a school representative, said composting waste may not work for everyone but it's a good tool to teach students that there are different ways of doing things.

"For us to do that in the city when you have a perfectly good sewer system, I can't imagine everybody in the city connecting to the composting toilet," he said. "We are doing it as a demonstration. It can be done."

The classroom was designed and built by a team of professionals in the Northwest who formed the Restorative Design Collective. The team donated $500,000 in time and building materials to the project.

The goal is to design buildings that have little to no impact on the Earth, said Stacy Smedley of KMD Architects, one of the project architects.

"Yes, it's extreme," said Chris Hellstern, also of KMD Architects. "It's about getting people comfortable with the different aspects. Once people see it in action, they're more likely to understand it."