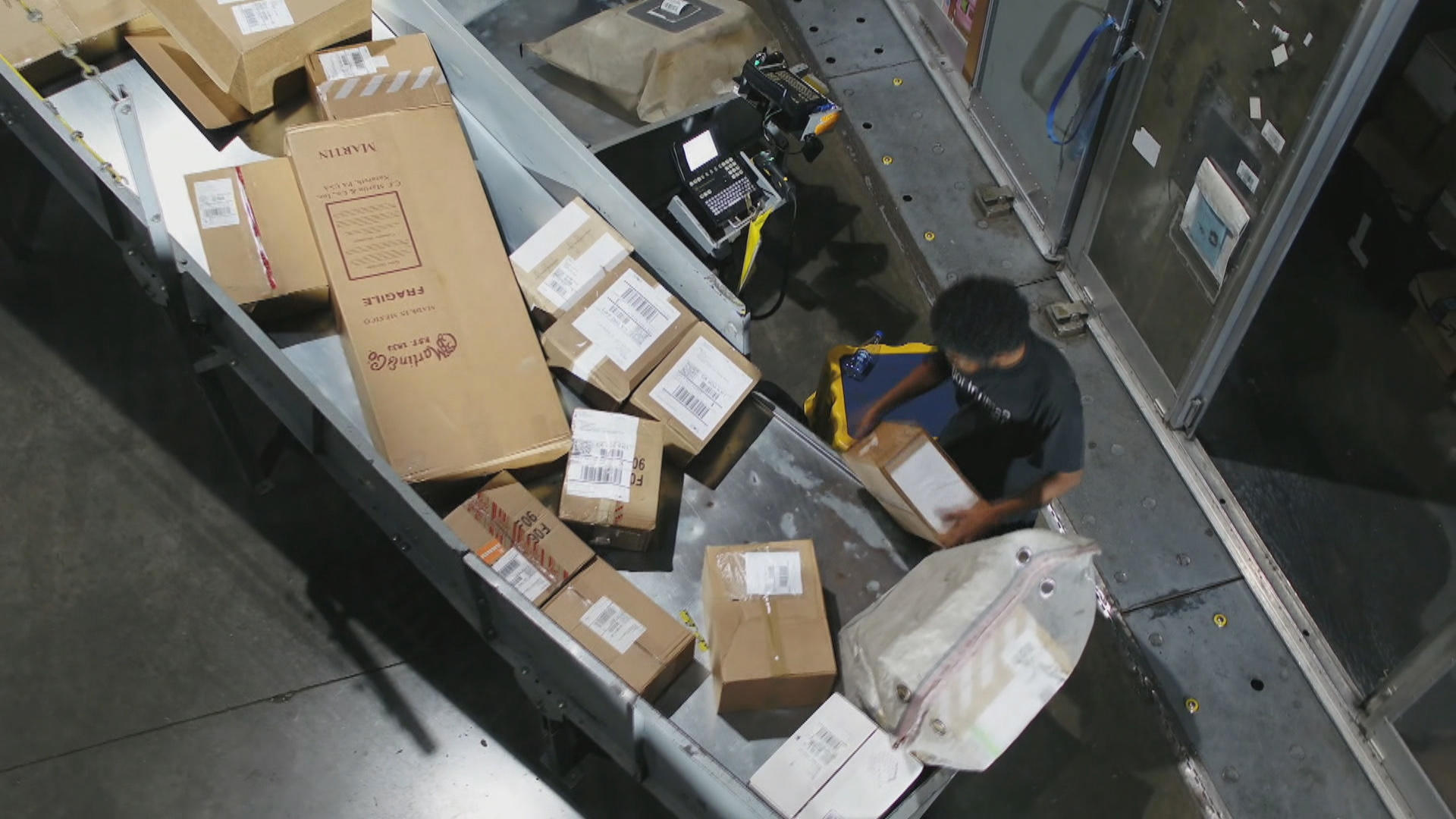 From the unending roar of jet engines to the constant hum of conveyor belts, it's beginning to sound a lot like Christmas at UPS Worldport, in Louisville, Ky. The shipping company expects to deliver around 800 million packages this holiday season.

Wednesday may be its busiest day ever, with 37 million deliveries. That's more than 425 a second, and nearly double a normal day.

Ramp un-loader Leslie Gorin feels like Santa's helper: "It's just like Santa, except we deliver all year 'round."

The reason the company is so busy this time of year is e-commerce. "It's been a sea change," said UPS public relations manager Jim Mayer.  "When was the last time you went to a department store? You're online now, you're clicking and purchasing, and as soon as that purchase is made, a shipping label is created, a UPS shipping label, and then that package is on its way."

Boxes arrive by plane at Worldport, where they are sorted by folks like inbound shifter Gary Howlett, one of 11,000 employees here. "Every year around this time it gets me excited, because I know we're delivering somebody's gift," he told correspondent Kris Van Cleave.

Once on the conveyer belt, the packages wind their way through the 5.2 million-square-foot facility. Codes on the boxes are repeatedly scanned, directing the boxes to front line supervisor Jordan Maynard's area; the belt knows to drop a box into just the right bag, headed to just the right place.

"There are thousands of bags in this room, and it will go into a specific bag that it's gonna go to," Maynard said.

The packages aren't here very long. From when they come in the door, line their way through 155 miles of conveyor belt, get sorted and sent on their way, takes less than 20 minutes.

By then, the bags of packages are loaded into freight containers, or boxes.

Gorin was pushing 2,000 pounds of packages onto a flight to L.A. She's not super-human; the ground has wheels, making loading easier and faster.  "It's like a game of Tetris, just finding the right spot for the box," Gorin said.

While she's packing planes, meteorologist Jeffery Sarver is scanning the skies for bad weather. "Our biggest job is to look at any weather that is going to impact our operation and try to find a way around it, to mitigate it – to delay a flight, speed a flight up, or just change the network," Sarver said.

And then it's up to the pilots who fly UPS' 248 planes, plus 35 additional aircraft they've leased for the holidays.

Van Cleave asked, "It's not a stretch to say you're kind of flying Santa's sleigh?"

Horton's tie even says "I am Santa." He knows he's not, but is happy to help old St. Nick. "We understand the weightiness of that responsibility, and we do our best to make sure that no kid is disappointed on Christmas morning," he said.

Once Horton's 767 lands, the packages make their way to those brown vans (which UPS calls package cars), and to your door by Christmas – if you make just one tiny deadline: Friday, December 21, the last day when something shipped next day air will be delivered by Christmas Eve.