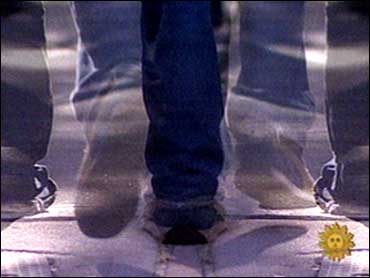 You could call it the role - or roles - of a lifetime. In the TV show "United States of Tara," Toni Collette plays just one woman who has multiple personalities.

They all come from the mind of Diablo Cody, the Oscar-winning writer of the hit film "Juno." She created the series for the cable network Showtime.

"We've met Buck, who is this very, sort of, aggressive male personality that she has," Cody said. "We've met 'T,' who's a very, kind of, sexualized teenage personality; and Alice, who's the ultimate homemaker."

"Have viewers recognized themselves in Tara, said, 'Maybe I have this disorder'? Have you gotten that reaction?" asked Smith.

"Yeah, it surprises me," Cody said. "People actually have said that."

And though Tara doesn't exist in real life, many therapists say her illness sure does.

"Tara is extremely real," said Dr. Richard Kluft, "but extremely unrealistic. What I mean to say is, everything that Tara demonstrates is real. I've seen it, many, many times over. What is unrealistic is that you see so much of it so … it's much more …"

Dr. Kluft is a psychiatrist who teaches at Temple University Medical School in Philadelphia and consults on "Tara."

Today, doctors prefer the less flashy name "dissociative identity disorder" (DID) to "multiple personality disorder" (MPD). They are the same.

How many personalities are typical in an MPD case?

(CBS)
"In an MPD case in the United States these days, about 16 for women and about eight for men," said Dr. Kluft (left).

He says most people with this disorder develop multiple personalities - or "alters" - as a way to cope with trauma or abuse:

"Whatever allows you to say, 'This did not happen to me. This is not going to happen to me again. I'm someone else.'"

And, believe it or not, according to Kluft, multiple personalities often go unnoticed.

"So do you think that there are, what, thousands of people walking around out there with MPD who don't even know it?" Smith asked.

"We might be at that level," said Dr. Kluft.

But there is a whole school of therapists that say the number is not in the millions, but zero … that not even a single case of multiple personalities is real … the whole concept not Sigmund Freud but junk science.

"I believe all MPD cases are artificial productions provoked by the attention doctors and others give them - all of them, said. Dr. Paul McHugh, a professor and former head of psychiatry at Johns Hopkins Medical School in Baltimore.

"People are persuaded that they have multiple personalities embedded within them," he told Smith, "and are encouraged to bring them out in the process of trying to get treatment for depression or anxiety or things of that sort."

Before "Sybil" there were fewer than 200 reported cases in the world. Not long afterwards, there were 8,000 in the United States alone.

"It's a story generated by 'Sybil' and generated by the people who followed on after it," said Dr. McHugh. "Multiple personality and trauma are two separate things. And these people have put them together as though they do match. But they only match in story form. We are in Oz here."

If MPD is make-believe, you wouldn't expect to find it in a manual - the DSM-IV, the Bible of mental health professionals - used to diagnose mental disorders.

Symptoms include "The presence of two or more distinct identities or personality states … at least two of these "recurrently take control" of the person's behavior," plus an "inability to recall important personal information."

The DSM authors claim that as many as one percent of Americans have the disorder.

(CBS)
But even that doesn't sway detractors like Dr. Paul McHugh (left).

"So, the DSM doesn't validate that a disease is actually out there?" Smith asked.

"Absolutely no," Dr. McHugh said. "All it says is, this is what several people say exists, and this is what it looks like to them."

And how does it look to Hershel Walker? Smith asked him, "How many personalities did you think you have? Gimme a number. Dozens?"

MPD is no fantasy to this former football player, a Heisman Trophy winner, arguably one of the greatest running backs of all time. Herschel Walker, the University of Georgia All-American, recently revealed that he's been diagnosed with multiple personalities.

Walker, now a successful businessman, says he developed the disorder when he was a kid.

"I had a stuttering problem, I have a speech problem. I couldn't put a sentence together," Walker said.

"And the kids teased you?"

"Do you think that abuse was severe enough that you turned [to] multiple personalities?" Smith asked.

He describes his alters in an autobiography, "Breaking Free: My Life With Dissociative Identity Disorder" (Simon & Schuster). They don't have names, just titles, like the General - who tried to keep his alters in line - and the Warrior, a competitive personality who was uncontrollable … the one who made him play Russian Roulette.

"And I remember pullin' a gun and spinning the cylinders, my puttin' it to my head and pullin' [the trigger]."

"What do you think would've happened to you if you didn't get therapy?" Smith asked.

"Oh, I could have ended up in jail, dead, could have hurt someone and stuff."

"You know, there's a lot of debate about this. There are respected therapists out there who say - "

"Why, why are they respected?" Walker said.

"By their peers," Smith said. "There are people who say -"

"That's what I'm saying, these are doctors. But I'm the one that have been through it. They're very good at sayin' that. But I'm here to, just to say, you know, they didn't have to go through it."

But there are scores of patients who did go through it … treatment, that is … who say their lives were ruined by therapists who convinced them they had a disorder that didn't exist.

Wallace: "126 different personalities. What does that mean, Nadean?"

Nadean Cool: "It means that I have a 126 different people."

Wallace: "And you believed in multiple personality disorder?"

Cool: "He taught me to believe it."

Wallace: "So you believed."

She sued her psychiatrist, who settled the case for 2 point three million dollars. Dr. Kluft closely watched that case and others where doctors paid big money:

"Settling is not an admission of guilt," he said. "Settling is a way of ending a process in a way that's agreeable to the various parties."

"In point of fact, we know that people who go through trauma do not develop multiple personalities," said Dr. McHugh, "or that's what we know when we follow people after they've had traumas. The important thing to know is the trauma does not produce multiple personality."

But Hollywood is of one mind about MPD - spellbound. After all, "Tara"'s creators are not doctors but dramatists … the series not science, but show biz.

"Are you adding to the discussion about whether this is a real disorder?" Smith asked.

"I think so, for better or for worse," said Cody. "But to generate discussion at all, I see that as a positive thing."

Renewed for another season, "Tara" will continue to raise questions about mental illness … multiple questions.