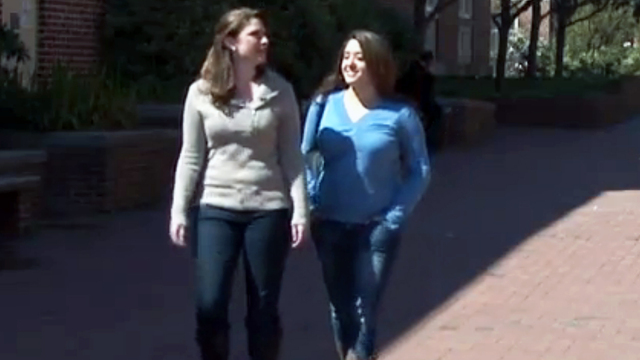 One day after the White House issued recommendations about combating sexual assault on campus, two of the young women who sounded the alarm about the problem were on Capitol Hill, taking their message straight to senators.

"A year ago I was focused on making change in Chapel Hill," says Andrea Pino, a senior at the University of North Carolina, Chapel Hill. "And now, well, it's bigger."

Much bigger. According to the Department of Justice, one in five women is sexually assaulted in college, and Pino and her friend Annie Clark, a UNC alum, are at the forefront of a movement of sexual assault survivors demanding that their universities get serious about the problem.

In early 2013, Pino and Clark filed a federal complaint with the Department of Education's Office for Civil Rights alleging that UNC was in violation of both Title IX for mishandling sexual assault complaints, and the Clery Act for failing to properly report allegations of sexual assault on campus. The department agreed to investigate the university - and the university has cooperated with the investigation.

"For the past year, a University task force has worked tirelessly to review and rewrite policies and procedures for responding to reports of sexual harassment and other forms of discrimination," UNC said in a statement. "From this work, many recommendations have been implemented, including increased training and resources, and we expect policy recommendations in the coming months."

But the women didn't stop at Carolina. Late last year they helped found the organization End Rape on Campus, and have since assisted women all over the country - from the University of California, Berkeley to Columbia to Dartmouth - in filing similar complaints against their colleges.
The impact has been profound: according to the Department of Education, 55 American universities (including UNC) are currently being investigated over their alleged mishandling of sexual assault on campus.

"Colleges and universities can no longer turn a blind eye or pretend rape and sexual assault doesn't occur on their campuses," said Vice President Biden last week, announcing the recommendations from the White House Task Force to Protect Students From Sexual Assault.

The recommendations include asking every school to survey its students about sexual assault in order to identify the scope of the problem; engaging students, particularly men, in education about sexual consent; and creating best practices for adjudicating sexual assault complaints.

Pino and Clark are humble about their accomplishments, and say their work has just begun.

"We've come a long way, but this isn't close to over," says Clark. Now, she and Pino say they are focused on educating lawmakers about the problem so that change, when it comes, is meaningful - and permanent.