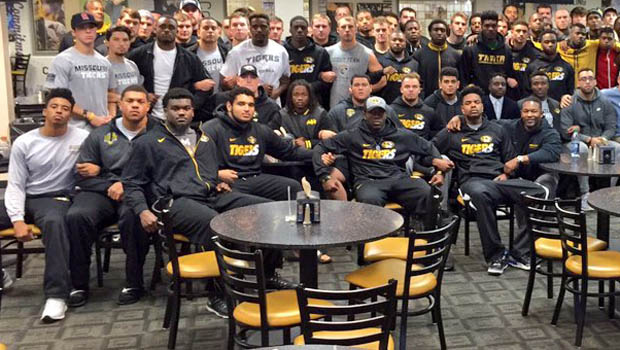 COLUMBIA, Mo. -- Student protests over racial incidents at the University of Missouri escalated over the weekend when at least 30 black football players announced they wouldn't participate in team activities until the university system's president is removed.

President Tim Wolfe gave no indication he has any intention of stepping down, but agreed in a statement Sunday that "change is needed" and said the university is working to draw up a plan by April to promote diversity and tolerance.

Late Sunday, the university system's governing body, the Board of Curators, announced a special meeting had been set for Monday. A statement indicated part of the meeting will be closed to the public.

A university spokesman didn't immediately respond to questions about whether the group would address Wolfe's status.

For months, black student groups have complained of racial slurs and other slights on the overwhelmingly white, 35,000-student campus. Their frustrations flared during the homecoming parade Oct. 10 when black protesters blocked Wolfe's car and he would not get out and talk to them. They were removed by police.

On Saturday night, black members of the football team joined the outcry, and on Sunday, faculty members and state lawmakers were weighing in.

The athletes didn't say explicitly whether they would boycott the team's three remaining games this season. The Tigers' next game is Saturday against Brigham Young University at Arrowhead Stadium, the home of the NFL's Kansas City Chiefs, and canceling it could cost the school more than $1 million.

"The athletes of color on the University of Missouri football team truly believe 'Injustice Anywhere is a threat to Justice Everywhere,'" the players said in a statement. "We will no longer participate in any football related activities until President Tim Wolfe resigns or is removed due to his negligence toward marginalized students' experience. WE ARE UNITED!!!!!"

Head football coach Gary Pinkel expressed solidarity with the black players on Twitter by posting a picture of the team and coaches locking arms:

Practice and other team activities were cancelled on Sunday, Pinkel and Missouri athletic director Mack Rhoades said in a joint statement. The statement linked the return of the protesting football players to the end of a hunger strike by a black graduate student who has vowed to not eat until Wolfe is gone.

"Our focus right now is on the health of Jonathan Butler, the concerns of our student-athletes and working with our community to address this serious issue," the statement said.

At least 150 students gathered Sunday night to pray, sing and read Bible verses. Many planned to camp there overnight amid temperatures that had dropped into the low 40s.

One of the sit-in participants, Abigail Hollis, a black undergraduate, said the campus is "unhealthy and unsafe for us."

The student newspaper, the Missourian, reports a faculty walkout and "teach-in" are planned for Monday and Tuesday in support of the protesters.

The paper says it isn't clear how many faculty members will take part, but quotes from a news release that says, "We, the concerned faculty of the University of Missouri, stand in solidarity with Mizzou student activists who are advocating for racial justice on our campus and urge all MU faculty to demonstrate their support by walking out on Monday November 9 and Tuesday November 10." The statement was sent out by Associate Professor Elisa Glick, the Missourian says.

The protests at the campus began after the student government president, who is black, said in September that people in a passing pickup truck shouted racial slurs at him. Days before the homecoming parade, members of a black student organization said slurs were hurled at them by an apparently drunken white student.

Also, a swastika drawn in feces was found recently in a dormitory bathroom.

Butler, who participated in the homecoming parade protest, began his hunger strike on Nov. 2 to call attention to racial problems at the state's flagship university.

Many of the protests have been led by an organization called Concerned Student 1950, which gets its name from the year the university accepted its first black student. Its members besieged Wolfe's car at homecoming last month, and they have been conducting a sit-in on a campus plaza since last Monday.

Concerned Student 1950 has demanded, among other things, that Wolfe "acknowledge his white male privilege," that he be removed immediately, and that the school adopt a mandatory racial-awareness program and hire more black faculty and staff.

Wolfe said Sunday that most of the group's demands have already been incorporated into the university's draft plan for promoting tolerance.

"It is clear to all of us that change is needed," he said.

Already, at Chancellor R. Bowen Loftin's request, the university announced plans to require diversity training for all new students starting in January, along with faculty and staff.

State lawmakers began to react Sunday. The chairman of a Missouri House higher education committee, Poplar Bluff Republican Rep. Steven Cookson said in a statement that Wolfe "can no longer effectively lead" and should leave his post. Joining him in calling for Wolfe's resignation was Assistant House Minority Leader Gail McCann Beatty, the highest-ranking black member of that chamber.

Wolfe, 56, is a former software executive and Missouri business school graduate whose father taught at the university. He was hired in 2011 as president of a four-campus system that includes Columbia, succeeding another former business executive who also lacked experience in academia.

The campus in Columbia is about 120 miles west of Ferguson, the St. Louis suburb where tensions erupted over the shooting death of unarmed black 18-year-old Michael Brown last year by a white police officer.

It's the latest controversy at the university in recent months, following the suspension of graduate students' health care subsidies and an end to university contracts with a Planned Parenthood clinic that performs abortions.