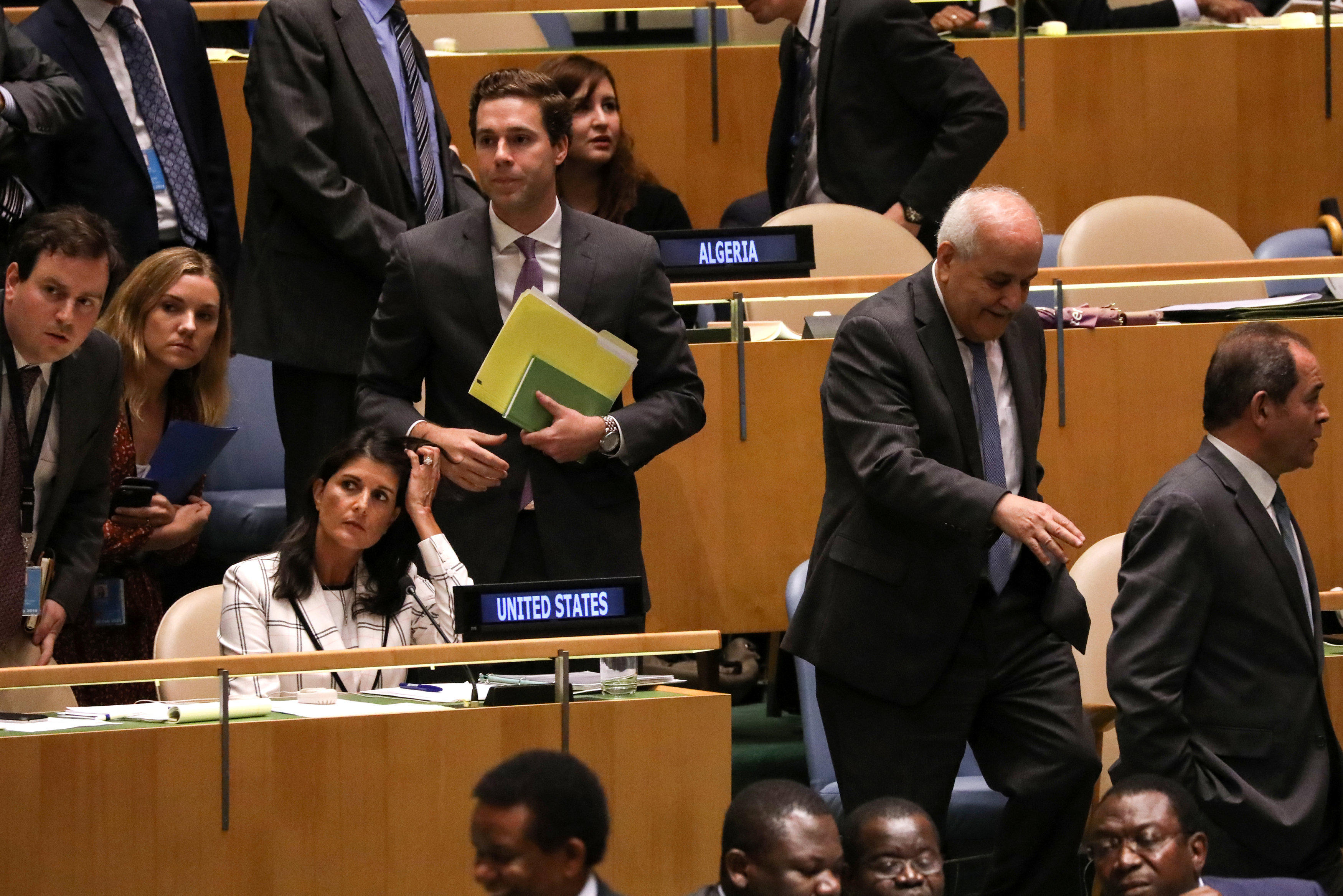 The United Nations General Assembly voted Wednesday on an Arab-backed resolution to condemn Israel for force against Palestinian civilians, including "excessive, indiscriminate force by the Israeli forces."

The vote at the General Assembly was 120 votes in favor, 8 votes against, and 45 abstentions, for the resolution entitled "Protection of the Palestinian civilian population." It was adopted at an emergency special session, and introduced by Algeria, Turkey and the Palestinians.

The vote came after a similarly drafted resolution failed at the U.N. Security Council because of a U.S. veto on June 1.

U.S. ambassador Nikki Haley attempted to include an amendment that would have condemned Hamas, which failed after several procedural votes.

"The nature of this resolution clearly demonstrates that politics is driving the day. It is totally one-sided. It makes not one mention of the Hamas terrorists who routinely initiate the violence in Gaza," Haley said to the 193-member General Assembly before the vote.

"Advancing peace is not the goal of this resolution ... (it) holds Hamas completely unaccountable for the most recent unrest. It blames everything on Israel," Haley said.

Canada's ambassador Marc-André Blanchard spoke – in addition to Haley - in favor of the U.S. amendment before the vote. Canada abstained on the final Arab-supported resolution.

Haley had argued that the amendment proposed by the U.S. "provides a small step in the direction of balance."

The Arab-backed resolution was first introduced in the Security Council after more than 120 Palestinians were killed during protests near the border with Gaza in the last three months.

Before the vote, Haley sent a letter to ambassadors that said that rockets fired by Hamas at Israel incited the violence.

The permanent observer of the Palestinian mission to the U.N., ambassador Riyad Mansour said that the U.S. amendment was offered in "bad faith" and said that the "illegal, belligerent, military occupation is the primary source and root cause of the recurrent and emergent crises we face."

"We cannot remain silent in the face of the most violent crimes and human rights violations being systematically perpetrated against our people," Mansour said.

The General Assembly vote on Wednesday garnered fewer votes in favor than a similar one in December that rejected President Trump's decision to recognize Jerusalem as Israel's capital.

Israel's U.N. Ambassador Danny Danon said they "welcome the American amendment condemning the terrorists of Hamas. It is despicable for any country to even consider to vote for a resolution condemning Israel while refusing to support the condemnation of Hamas."

The U.S.' support for Israel during the recent uptick in violence on the Gaza-Israel border has been criticized by many human rights groups. Human Rights Watch said this week that Israel's use of lethal force against Palestinian demonstrators in the Gaza Strip in recent weeks may constitute war crimes.

Brett Bruen, a former Obama administration official and president of Global Situation Room, told CBS News at the U.N. on Wednesday that U.S. actions in the Middle East are "costly for Israel, which has grown further isolated" as the U.S. irritates allies and emboldens adversaries.

Voting with the United States and Israel were Australia, the Marshall Islands, Micronesia, Nauru, Solomon Islands and Togo.

The resolution calls on U.N. Secretary General Antonio Guterres to propose an "international protection mechanism" for the Palestinians in Gaza and the West Bank.

The European Union's ambassador Joanne Adamson, deputy head of the delegation to the United Nations said "Israeli security forces must refrain from the excessive use of force against unarmed civilians."

In apparent frustration, Haley said "for some, attacking Israel is their favorite political sport."