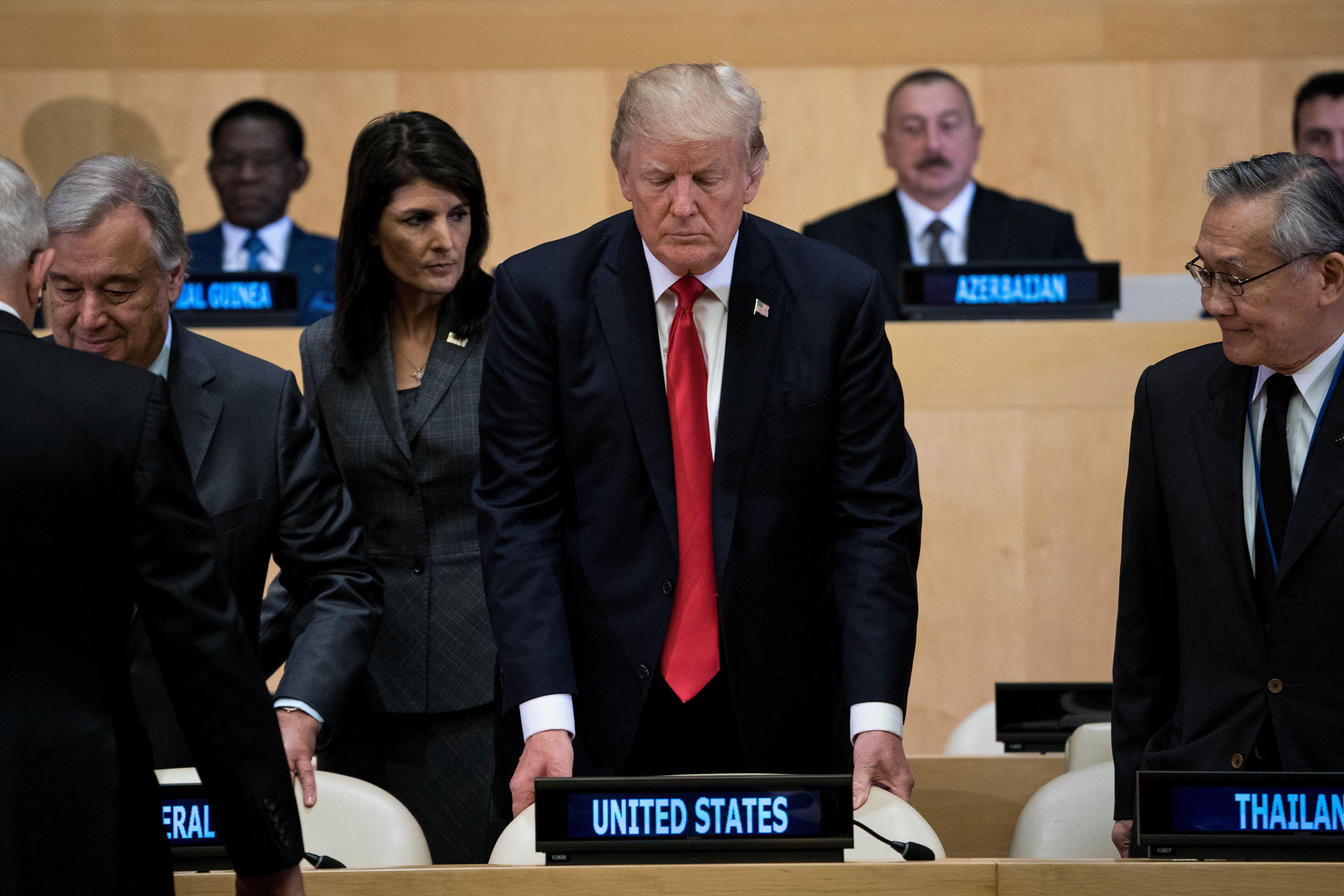 UNITED NATIONS -- World leaders will start trickling into New York on Tuesday for the opening of the United Nations General Assembly, but the big names, including President Donald Trump, won't show up to U.N. Headquarters until next week. More than 140 leaders will make their case to the UNGA this year on what is arguably the biggest world stage, but the biggest questions revolve, for the second year running, around Mr. Trump.

The American president's presence at the UNGA carries extra weight this year as the U.S. currently holds the monthly-rotating chair of the Security Council.  The most intriguing event may be President Trump's chairing of a Council meeting -- his first time wielding the U.N. gavel.

"Like it or not, unless the Pope or Kim Jong Un show up, all eyes are on Trump," one Security Council diplomat, who wished to remain anonymous, told CBS News.

But his seat at the helm and all the global attention aside, the odds of Mr. Trump winning approval for any meaningful Security Council resolutions are low, given that rivals Russia and China have veto power as fellow permanent members.

The Security Council Presidency does comes with one important perk, however: Washington sets the agenda.

U.S. Ambassador Nikki Haley, as sitting President of the Council, announced on September 4 that the Council session during the UNGA would, "address Iran's violations of international law." Specifically, she said Tehran had "been ignored and given a pass for too long, and we think it's time for Iran to stand up and explain themselves."

But just three days later, the U.S. Mission to the U.N. said the meeting would focus on a "broader range of issues," including the "proliferation of weapons of mass destruction," in addition to Iran's alleged sanctions violations. According to a Security Council diplomat, Russia had objected to a Security Council meeting focused on singling out a single nation.

The fact that President Trump could get an earful from the four European nations on the Council who strongly object to his administration's unilateral withdrawal from the 2015 Iran nuclear agreement may also have been a factor in the evolving agenda.

When Mr. Trump slams down the gavel and calls on world leaders to speak, including British Prime Minister Theresa May, France's Emmanuel Macron and Russian Foreign Minister Sergey Lavrov, each nation can discuss whatever they want related to weapons of mass destruction, but no resolutions are expected.

According to Council protocol, other nations may join in, and it's unclear whether Iranian President Hassan Rouhani, who is planning a press conference the same day, will attend. If he does, watch for the chemistry between Mr. Trump as presider and Rouhani, who would sit just a few seats along the table.

"There is no shortage of issues, with North Korea being front and center," Ambassador Haley has said. But again, little or no real progress is expected during the General Assembly and the real work on getting Kim Jong Un to give up his nuclear weapons is taking place far from New York.

As the leaders arrive at U.N. Headquarters this week, a summit between the leaders of North and South Korea will get underway in the North Korean capital. Despite scant evidence that Kim is actually moving toward the goal of denuclearization, stated by Mr. Trump, North Korean state media has said he remains committed to that outcome.

The General Assembly will come one day after an urgent Security Council meeting, called by the U.S., to pressure other Council members states (unnamed by the U.S., but mainly China and Russia) to more vigorously enforce the sanctions already in place against North Korea.

If there is interest in planning the next steps in the process, some of the key players will be present at the UNGA, including Japanese Prime Minister Shinzo Abe and North Korea's Foreign Minister Ri Yong Ho. Both men are scheduled to address the gathering.

Last year when Mr. Trump arrived at the UNGA, less than 20 blocks from his Trump Tower condo, U.N. Secretary-General Antonio Guterres was also new to the job. The two newbies sat side by side at a pre-General Assembly event to voice joint support for initiatives to reform the United Nations.

Guterres only jabbed obliquely at U.S. policy, specifically on the need to "reestablish the integrity of the refugee protection regime and the simple decency of human compassion."

A year later, the U.S. has withdrawn from the Paris Climate Accord, the Geneva-based U.N. Human Rights Council, the Iran nuclear agreement, and the U.N. Educational and Cultural agency (UNESCO) and refused to sign the Global Compact on Migration. The Trump administration has made cutbacks in voluntary funding for the U.N. Population Fund (UNFPA), the Palestinian relief agency (UNRWA) and limited some peacekeeping funds. U.S. National Security Advisor John Bolton recently sought to undermine the functioning of the International Criminal Court. Mr. Trump may receive a distinctly less-warm welcome at the world body this year.

U.N. agencies are pushing back. In June, the International Organization for Migration rejected Mr. Trump's candidate, Ken Isaacs, to lead the agency. The snub was pointed and unusual for the U.N. agency, which relies on U.S. funding.

Now the U.N. chief is speaking out, too.

"I think that the soft power of the United States… is being reduced at the present moment," Guterres said in an interview with The Atlantic last week, questioning whether the U.S. would continue to be the "dominant factor" in determining global affairs.

But in spite of the gripes many nations have with U.S. policy, Washington remains by far the largest financial contributor to the U.N. budget, covering about 22 percent of the U.N. regular operating budget, which amounts to $5.4 billion for 2018-2019. The U.S. is also the largest contributor to the separate U.N. peacekeeping budget of $6.7 billion for 2018-2019, even after the U.S. reduced its 28.5 percent to 25 percent. After the U.S., China and Japan are the biggest individual contributors, both hovering at about 10 percent. Russia contributes about 4 percent of the U.N. budget.

Women are set to dominate some of the proceedings this year; U.S. Ambassador Nikki Haley is President of the U.N. Security Council for the month, the President of the General Assembly, newly sworn in, is a firebrand former Defense Minister from Ecuador, Maria Espinosa, and the recently appointed Head of the U.N. Human Rights division (who sparred with Haley in her first week) is former Chilean President Michelle Bachelet.

Haley, a member of the Trump Cabinet and National Security Council, has made her mark "supporting most of the decisions" of the White House, but not agreeing with the president on everything, as she wrote in a recent Washington Post oped. She has been a staunch critic of Russia's role in blocking U.N. action on Iran, North Korea, Ukraine and Syria.

The newly-elected President of the General Assembly, usually a ceremonial role, may be more of a player this year. In a wide-ranging interview with CBS News, GA President Maria Fernanda Espinosa Garcés -- only the fourth woman in the 73-year history of the U.N. to chair the gathering, and the first woman from Latin America to do so -- said her passions on migration, climate change and gender equality will shape the way she carries out her role.

Espinosa specifically said she wants the U.N. to work toward a set of rules to protect immigrants, rather than placing an emphasis on sovereignty. "The history of humanity is about people moving from one place to the other… I think that the challenge for the multilateral system is to establish rules-based migration and orderly, predictable, safe migration for all."

The move by Washington to kick off Mr. Trump's public appearances in New York with the high-level counter-narcotics event alongside British partners may notch him an early win. It's a theme on which most nations can agree.

Cockayne said that for the U.S. audience, the event will allow the Trump administration to show "awareness of the importance of the opioid problem," while, "on an international level, the event allows the U.S. to quietly signal to those countries that it is most likely to be at odds with during the U.N.'s High Level Week -- namely Russia, Iran and to some extent China -- that it can and will work with them where their interests align, for example in cooperating to fight transnational threats such as drug trafficking or global terrorism."

Some of the most controversial global leaders, including Chinese President Xi Jinping, Russia's Vladimir Putin, Narendra Modi of India and Pakistan's new Prime Minister Imran Khan, are not scheduled to attend this General Assembly.

Canadian Prime Minister Justin Trudeau will be at some of the meetings but will leave his Foreign Minister Chrystia Freeland, who has sparred with Mr. Trump over NAFTA negotiations, to speak at the General Assembly.